Yelp Inc. (NYSE:YELP) announced better-than-expected third-quarter 2017 results on Wednesday after the market closed, highlighting another unexpected profit and strong growth in both traffic and advertiser accounts for its core local business review platform.

Yelp also issued seemingly conservative revenue guidance for the current quarter and reduced its outlook for the full year, causing shares to initially fall in after-hours trading. But management later explained that, on the heels of Yelp's sale of Eat24 to Grubhub (NYSE:GRUB), the outlook was essentially a reiteration of last quarter's strong guidance.

Let's dig deeper to see what drove Yelp's business as it started the second half of the year, as well as what shareholders should expect in the months ahead. 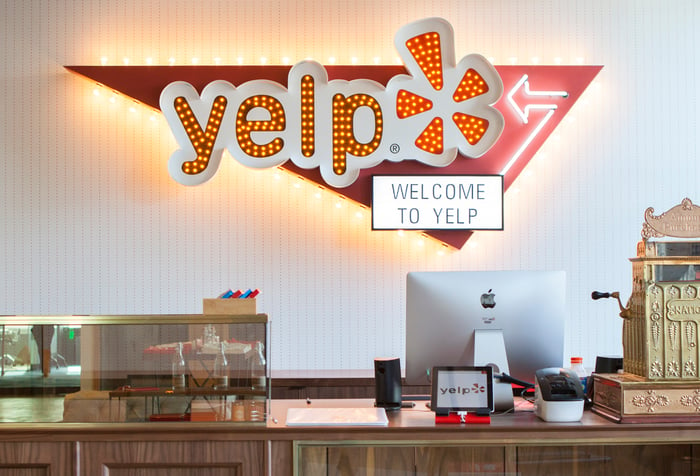 But investors should keep in mind that this guidance reflects the sale of Eat24 to GrubHub, and a long-term partnership under which Yelp is integrating online ordering from GrubHub restaurants onto its local goods and services platform. The partnership dictates that Yelp will only recognize revenue via royalties on transactions originating on Yelp and sent over to Grubhub, which means sales under the deal will start out small. But the move is expected to nearly double online food ordering options on Yelp as it finishes the integration in early 2018.

"[If] you were to take the third quarter, fourth quarter, and pull out Eat24 from both periods," Stoppelman elaborated during the subsequent call, "the growth rate of the underlying Yelp business is comparable in that same period. So no big change in our views and outlook there."

With that in mind, there was nothing not to like about Yelp's performance from an investor's perspective. And it's no surprise to see shares trading up modestly to near a 52-week high in response today.