For all three of these stocks, rapid growth was the name of the game.

Apple finished out its fiscal 2017 strong, reporting its highest fourth-quarter revenue ever. 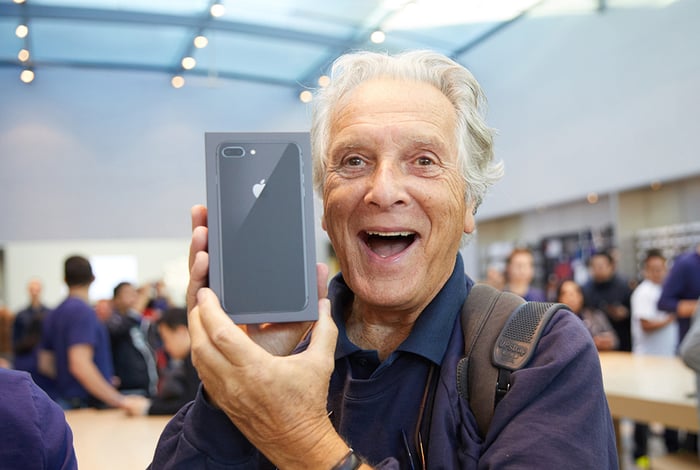 But more notable than Apple's absolute revenue of $52.6 billion during the quarter was how revenue growth accelerated for the fourth consecutive quarter in a row. The quarter's revenue was up 12% compared to revenue in the year-ago quarter. In the prior quarter, revenue was up 7% year over year.

iPhone revenue for the quarter was up an impressive 2%, even without the help of the iPhone X (which didn't launch until Nov. 3). In addition, revenue increased across every product category.

Demonstrating the effectiveness of Apple's aggressive share repurchase program, earnings per share increased much faster than revenue, jumping 24% year over year to $2.07.

Apple topped off its solid fourth-quarter results with huge guidance for its holiday quarter. Management said it expects first-quarter revenue between $84 billion and $87 billion, up from revenue or $78.4 billion in its last holiday quarter.

After repeated warnings from management that it anticipated revenue growth to come down meaningfully in the second half of 2017, the social network's revenue growth did the opposite: It accelerated. Third-quarter revenue rose 47% year over year, higher than the 45% revenue growth it posted in its prior quarter.

Though management's expectations for ad load to no longer contribute meaningful growth to ad revenue in the second half of the year did play out as anticipated, Facebook more than made up for this loss of a key catalyst with strong growth in its ad prices.

Net income and EPS were up 71% and 69% year over year, respectively.

Shopify, which has gained attention from investors in recent years as its stock price soared more than 200%, extended its long track record of impressive growth. The company reported a 72% year-over-year increase in third-quarter revenue and an 86% rise in gross profit. The growth in Shopify's business was driven by a 79% year-over-year increase in merchant solutions revenue and a 65% rise in subscriptions solutions revenue. Third-quarter gross merchandise volume, or the total dollar value of orders processed on Shopify's platform, was up 69% compared to the year-ago quarter.

In today's fast-changing retail environment, merchants large and small are hungry to leverage all that technology can do for them," said Shopify CFO Russ Jones about the quarter. "This is why our platform is so valuable to merchants and why they keep coming to Shopify. Our results underscore this, with another record quarter for merchant adds, along with a record number of store launches on Shopify Plus in the third quarter."

On the back of such strong results, management increased its guidance for the full year. Shopify now expects full-year revenue to be between $656 million and $658 million, up from a previous forecast for revenue between $642 million and $648 million. Management also said it expects a narrower adjusted operating loss, raising its forecast from a loss in the range of $7 million to $11 million to a loss between $1.5 million and $3.5 million.