A little more than three years ago, Apple (NASDAQ:AAPL) released the iPhone 6 and 6 Plus, its first large-screen phones. These devices helped power Apple to a $51 billion (or 28%) year-over-year revenue increase in its 2015 fiscal year. Meanwhile, earnings per share surged 43%, from $6.45 to $9.22.

The recent launch of the iPhone X could have a similarly powerful effect on Apple's revenue and earnings during the 2018 fiscal year, which began last month. However, there's one important difference between now and fiscal 2015: Apple is poised for strong growth in its other product lines this year, whereas it was much more of a one-trick pony three years ago. 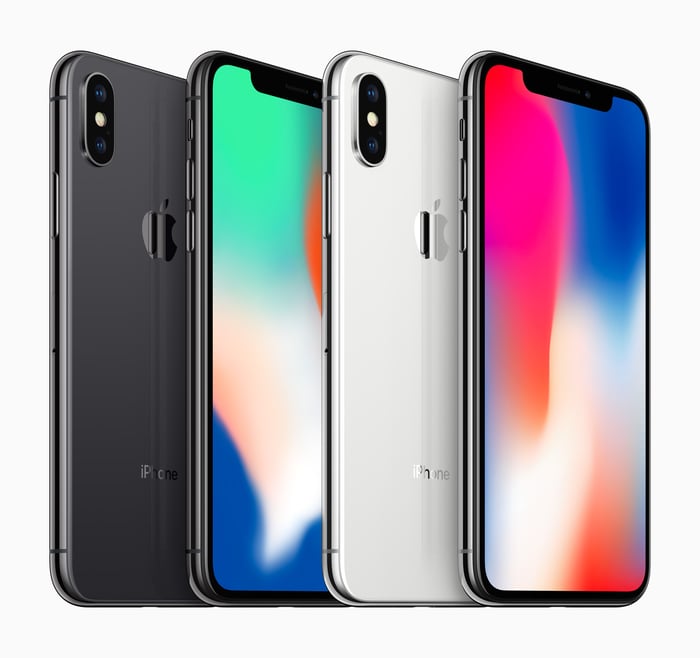 Apple's growth was all iPhone in fiscal 2015

As noted, Apple added a stunning $51 billion to its top line in fiscal 2015. What makes this revenue growth especially remarkable is that it was driven singlehandedly by the iPhone product line.

The rest of the business is growing again More recently, Apple has gotten all the pieces of its business moving in the right direction. In the second quarter, non-iPhone revenue rose 11% year over year, despite yet another double-digit drop in iPad revenue. In the third quarter, the growth rate accelerated to 12%, as even iPad revenue turned positive on a year-over-year basis.

On Thursday, Apple reported that non-iPhone revenue surged last quarter, rising 27% year over year. (Excluding a one-time $640 million revenue adjustment in Apple's services business, revenue would have increased by 24%.) On a full-year basis, iPhone revenue increased by 3% -- mainly driven by an extra week in the 2017 fiscal year -- whereas revenue from the rest of the company jumped by 11%.

The outlook for fiscal 2018 is very favorable

Apple's iPhone revenue over the past year was still 9% below the peak reached two years earlier, during the massively successful iPhone 6 product cycle. However, demand for the pricey iPhone X, which starts at $999, appears to be very strong. As a result, this year Apple is poised to smash through the record of $155 billion in iPhone revenue that was established in fiscal 2015.

Meanwhile, Apple is well positioned to achieve another double-digit gain in non-iPhone revenue during the coming year. Most importantly, the services business is gaining traction and posted its fastest growth of the year last quarter. Based on that segment's recent growth rate, Apple could add $7 billion or more in services revenue this year.

The "other products" segment could also take off in fiscal 2018, thanks to the recent launch of the cellular-equipped Apple Watch Series 3, and to a lesser extent the Apple TV 4K. There are also hopeful signs that iPad sales could continue to rebound as consumers replace older devices and enterprise adoption rises. Lastly, the Mac product line probably can't duplicate the 13% revenue gain it achieved last year, but a recent product refresh should drive continued growth.

In short, whereas non-iPhone revenue fell by $2 billion in fiscal 2015, it is likely to rocket higher by more than $10 billion this year, perhaps eclipsing the $100 billion mark. The combination of a strong iPhone cycle and growth across the rest of Apple's product lines should drive stellar revenue and earnings growth for Apple in fiscal 2018.