Early November should prove interesting for followers of both Himax Technologies (NASDAQ:HIMX) and semiconductor industry darling NVIDIA (NASDAQ:NVDA). Both will announce quarterly earnings on Nov. 9, but investors will be grading them on decidedly different curves.

Himax's numbers will help investors determine if CEO Jordan Wu's promise of a return to growth after a disappointing second quarter will be fulfilled. Smiling NVIDIA shareholders know its story is entirely different than Himax's. The question they'll be looking to answer is whether NVIDIA can maintain the outstanding growth rates that have its share price bumping up against 52-week highs seemingly daily?

Both chipmakers offer tremendous growth potential, but which is the better buy? 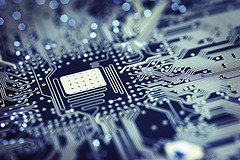 Last quarter was dismal nearly across the board for Himax, which reported a 25% drop in total revenue to $151.7 million.  Most of its segments, particularly its large panel display drivers, and small and medium display drivers, took it on the chin. Its $52.1 million in large panel driver sales was a 23% drop from a year ago.

Sales from its small and medium display driver segment, which includes Himax's all-important smartphone customers, also sank 23% year over year to $70 million, though that was a 5.1% increase sequentially. The quarter-over-quarter growth of smartphone sales was particularly positive given Wu's statement a quarter ago that orders were rising as manufacturers in China were gearing up for new models this fall.

As for the larger display driver's poor results, Wu had warned that an "engineering hiccup" caused a delay in deliveries. That issue has been remedied, so earnings should improve from here. One bright spot related to Himax's efforts to diversify its product lineup into automotive displays and augmented reality (AR); sales for automotive applications soared  51% last quarter.

In addition to growth in its core segments, the current quarter should produce a bump in sales for Himax's 3D sensors, which customers are clamoring for. Despite its poor Q3, it's gathering momentum both in its key segments as well as up-and-coming new markets. For a company of this size that's still in a hyper-growth phase, Himax's 2.35% dividend yield is another upside.

Among the first things that come to mind when people think of NVIDIA are its graphics processing units (GPUs). Its new-ish GeForce, a virtual-reality-ready offering, has quickly become the video game industry standard. And in the wake of recent  wins in China and a collaboration with video game giant Activision Blizzard, that dominance will continue.

Perhaps the best news underlying last quarter's 56% revenue rise to a record-breaking $2.23 billion was the company's strength in fast-growing new markets -- at least, new for NVIDIA -- including artificial intelligence-driven data center sales. CEO Jensen Huang pointed to the data center revenue that came in more than two and a half times higher as a primary driver of the stellar quarterly results.

NVIDIA's late arrival to the data center party means it still has a substantial growth opportunity here. Like Himax, NVIDIA is also moving full steam ahead into the smart car space. But while Himax's autonomous car push is focused on 3D sensor technology, NVIDIA is taking a wider view.

Last quarter, NVIDIA added another name to the list of major car manufacturers utilizing its DRIVE PX self-driving platform. The market potential is nearly limitless, and NVIDIA's AI car platform is making significant strides to become the solution of choice.

Himax stock may not seem to be the best buy now, but in the long term, its shareholders will be rewarded, and they'll enjoy some income along the way. It could also be argued that considering NVIDIA's current valuation -- it's priced way above its peers by every metric -- the chipmaker carries a lot of downside risk.

However, NVIDIA is growing by leaps and bounds in gaming as well as the fast-growing smart car, data center, and AI markets. That rapid growth is far from over, and it's already an established industry leader, which is why NVIDIA gets the nod as the better buy.