Worry that Obamacare is on life support doesn't seem to scare Centene Corporation (NYSE:CNC) CEO Michael Neidorff. Over the past few years, he's been significantly increasing Centene's exposure to the exchanges, and at a time when other insurers are retreating from the Affordable Care Act, that's translating into big money for the insurer. Here's Centene's secret to success and why investors might want to stash its shares in their portfolio.

As a refresher, the Affordable Care Act, or as it's more commonly called, Obamacare, mandates that Americans have health insurance or pay a penalty. Insurers can compete for customers on state-run insurance marketplaces, or, in the case of many states, through the federally run marketplace, Healthcare.gov. 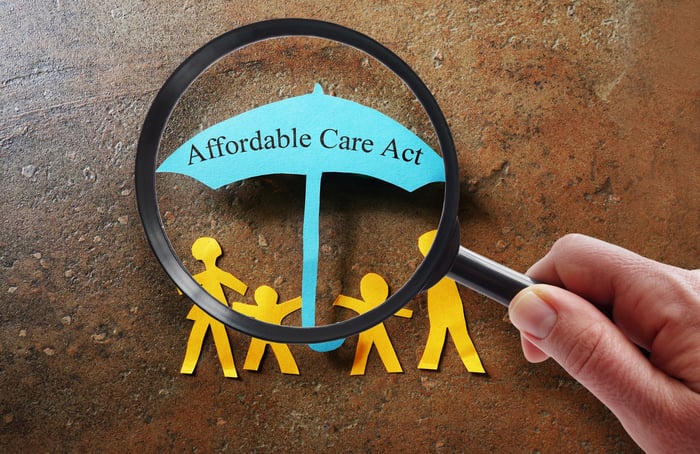 Obamacare also provides credits to consumers that reduce monthly premiums. These credits are available to people earning up to 400% of the federal poverty level. In 2017, that means a family of four with income up to $98,400 can qualify for at least some help with their monthly premiums.

This year, the Centers for Medicare and Medicaid Services reports that 12.2 million Americans signed up for their health insurance through Obamacare, with 83% receiving credits. Overall, the average person receiving credits is paying $106 per month for coverage that otherwise would have cost them hundreds of dollars more per month.

Big business or a bust?

Obamacare's been a mixed bag for some of the nation's biggest insurers. For example, UnitedHealth Group (NYSE:UNH) is the biggest health insurer in America, but it didn't begin selling plans on the exchanges until Obamacare's second year, when it offered plans in more than 30 states. Since then, hundreds of millions of dollars in losses on these plans has caused the company to exit almost every Obamacare market. Other insurers, including Anthem (NYSE:ANTM), the nation's second largest insurer, and Aetna have reduced their participation in Obamacare, too.

Yet that hasn't stopped Centene from increasing its exposure to the exchanges. In 2016, it sold plans in about a dozen states, and it sells plans in 15 states in 2017. In 2018, it's offering plans in three more states: Kansas, Missouri, and Nevada.

The increasing presence in these Obamacare markets has added about 1 million people to its customer base, 90% of whom receive tax credits because their income falls below the 400% federal poverty level threshold. Companywide membership was 12.3 million people nationally, up 8% from the third quarter of 2016. Altogether, rising membership resulted in total third quarter revenue of $11.9 billion, up 10% year over year, and thanks to a firm grip on expenses, third-quarter earnings per share were $1.35, up 21% from the $1.12 reported in Q3 2016. 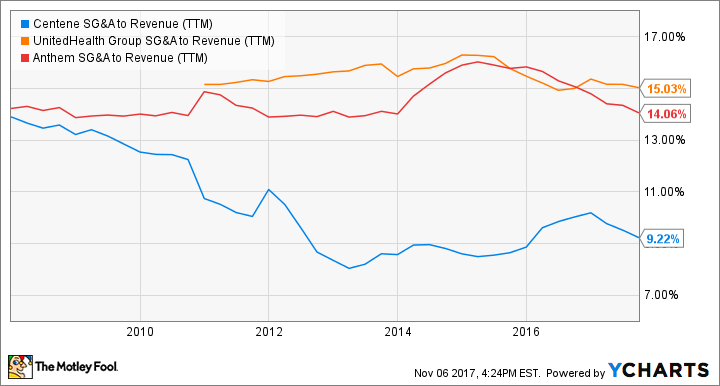 Centene's management may have to make some changes depending on how reform plays out, but until then, it says it's "business as usual," and that means managing its growing membership, preparing for its 2018 expansion, and acquiring companies to enter new markets. In September, it agreed to acquire Fidelis, a Medicaid and Obamacare marketplace insurer in New York, for $3.75 billion. The acquisition is expected to close in Q1 2018 and increase earnings immediately.

How Centene's Obamacare performance stacks up in 2018 will depend a lot on how enrollment figures pan out. The Obamacare marketplaces began enrolling people in plans on Nov. 1, and they'll continue enrolling people until Dec. 1. The four-week enrollment window is significantly shorter than prior years, and that, plus less federal spending on marketing this year, could negatively affect enrollment figures. Nevertheless, Centene expects much of its Obamacare business next year to be return business from renewals, and it's boosting its marketing spending this year to try to bridge some of the gap associated with the downturn in federal spending on advertising.

Overall, industry watchers think Centene's full-year profit margin on Obamacare plans will be about 5%, and that's a stark contrast to the losses other insurers have experienced. As a result, Centene's guiding for full-year 2017 revenues of between $47.4 billion and $48.2 billion and adjusted EPS of between $4.86 to $5.04. Given its forecast, the potential to grow next year thanks to expansion plans, and its low-cost business model, I believe Centene's worth owning in healthcare portfolios.