While most income investors focus their time studying large-cap stocks, it's worth remembering that there are scores of small-cap dividend stocks that are worthy of consideration, too. Which little-known stocks do we Fools think deserve some love from investors? We asked a team of investors to weigh in, and they picked Gentex (NASDAQ:GNTX), Hannon Armstrong (NYSE:HASI), and LeMaitre Vascular (NASDAQ:LMAT). 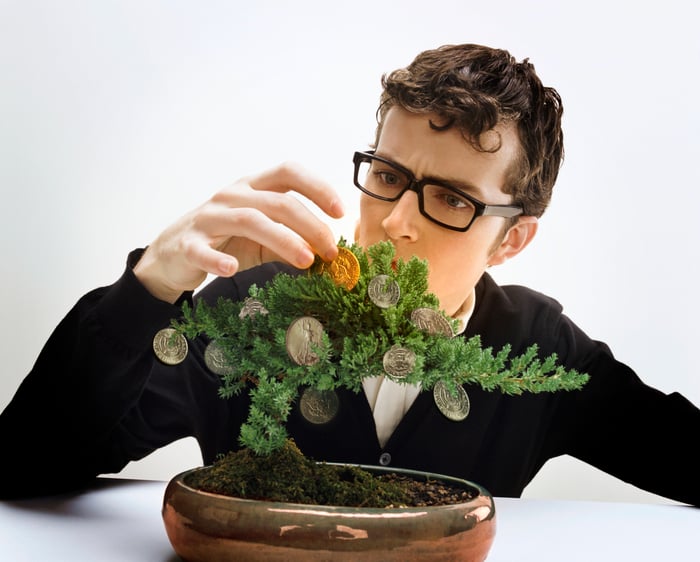 A cash-generating machine with growth potential

John Rosevear (Gentex Corp.): You've likely never heard of Michigan-based Gentex, but you've probably seen its products. If your car's rearview mirror -- the one inside your car -- has buttons, or switches, or dims itself at night, it was probably made by Gentex.

Gentex invented the automatically dimming rearview mirror for automobiles back in the 1980s, an innovation that got a lot of attention from automakers looking to add features to upscale models. Today, Gentex has about 90% of the global market for those auto-dimming mirrors, and its mirrors have incorporated a growing mix of useful gadget functions that have steadily boosted their average selling prices -- along with Gentex's revenue and profit.

That growth is likely to continue. Consider this: Modern vehicles produce and use more data than ever. As long as our cars have human drivers, that data has to be presented somehow. The rearview mirror is an important space in the driver's field of vision, and Gentex has proven that it can make goodies of it.

All that cash helps Gentex fund a steady dividend, yielding a little over 2% at current prices. It's a nice add-on to a small-cap stock that has some real growth potential over the next several years.

An energy dividend built to last

Travis Hoium (Hannon Armstrong): One of the hardest things about investing in clean energy or efficiency projects is that the upfront cost is usually very high and the payoff may take years to materialize. Most businesses would have a hard time financing these investments, which is where Hannon Armstrong comes in.

Hannon Armstrong isn't a wind or solar project owner like most yieldcos on the market today. Instead, it owns the land underlying solar projects, or owns a senior equity position in wind projects. In energy efficiency, it even provides financing that's backed by liens, or is guaranteed by a government entity. This provides stable cash flows at a very low-risk profile, even by renewable-energy standards.

What Hannon Armstrong does with the return from the projects I've outlined is pay a dividend. Today, that dividend is $1.32 per share, which means the stock yields 5.4%. There are no 10- or 20-year contracts backing that dividend as there are with some yieldcos, but that's replaced with the flexibility to invest in a variety of energy assets and the low-risk financing strategy of taking senior positions in cash flows.

Hannon Armstrong may not be a household name, but it's a rock-solid dividend in a growing industry in need of creating sources of financing. I think it's a great long-term investment.

Brian Feroldi (LeMaitre Vascular): Vascular surgeons rely on an array of products to get them through a surgery. Some of these products are used infrequently, but can play a critical role in making certain types of surgeries a success.

LeMatire Vascular is a leading supplier of many of these niche surgical products. The company sells things like shunts, grafts, catheters, and more. While the products themselves vary, one thing that most of them have in in common is that they compete in market segments that generate less than $125 million in annual sales. That might sound like a big number, but it's actually quite tiny in the medical world. That's important because it allows LaMaitre to fly under the radar of the big boys, which helps to limit competition.

The company's focus on niche markets has allowed it to grow quickly over the years, thanks to management's knack for buying or building useful new products. When combined with geographic expansion and steady price increases, LaMaitre's financial statements have flourished, and its stock has absolutely crushed the market. 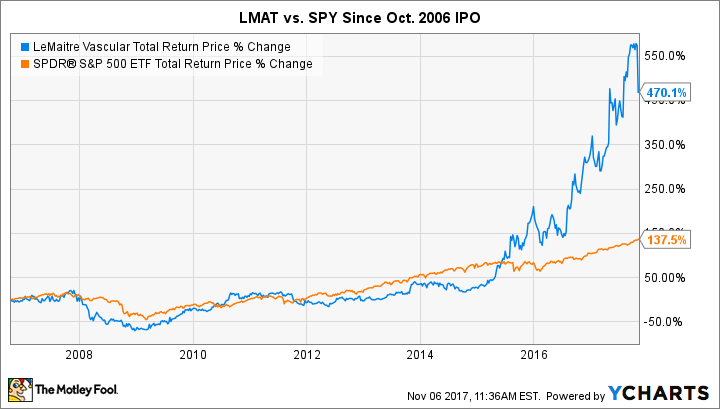 While LaMiatre is still largely focused on growth, the company has been paying a dividend since 2011. The current yield of 0.7% looks quite modest, but that's only the case because the company's share price has soared.

In total, LaMaitre is a niche medical device maker that offers investors both growth and income. The company's shares currently are trading at a discount, and I think right now is a fine time for income-focused investors to consider getting in.