It's official: Ford Motor Company (NYSE:F) has entered into a new joint venture that will build electric vehicles in -- and for -- China.

It's the latest move in Ford CEO Jim Hackett's effort to push the Blue Oval more quickly into the high-tech future. Here's what we know. 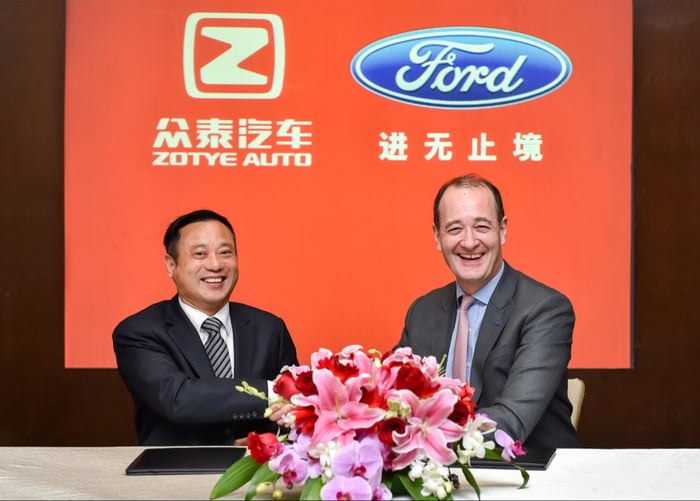 A joint venture to build EVs in China

Here are the high points of the deal announced by Ford and its latest Chinese business partner:

The deal isn't a surprise; Ford and Zotye Auto said in August that they were exploring the possibility of a joint venture focused on electric vehicles. Ford's Asia Pacific chief, Peter Fleet, said that Zotye Ford's vehicles will be aimed at young urban buyers: "Subject to regulatory approval, Zotye Ford will introduce a new brand family of small all-electric vehicles. We will be exploring innovative vehicle connectivity and mobility service solutions for a new generation of young city-dwelling Chinese customers."

Zotye Auto is a privately held automaker headquartered in Huangshan City, about 300 miles west of Shanghai. It's pretty small: Zotye sold about 323,000 vehicles in 2016, according to JATO Dynamics. (For comparison, Ford shipped about 6.7 million vehicles in 2016.)

To the extent that Zotye Auto was known at all outside of China before its association with Ford, it was because of its SR9 model, an inexpensive SUV that looks a lot (and I mean a whole lot) like a Porsche Macan. But in addition to the SR9 and Zotye's other internal-combustion SUVs, the company has had some recent success with small, affordable electric vehicles. Its E200, a tiny two-seater, has done fairly well in smoggy Beijing, where internal-combustion vehicles are restricted due to air-quality concerns. 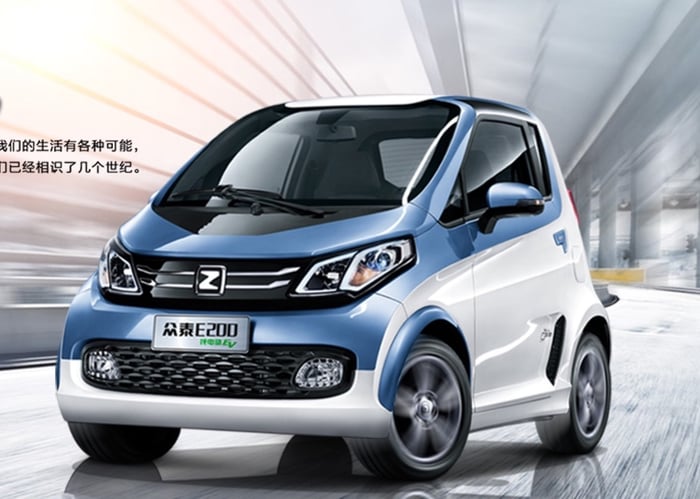 Ford has characterized Zotye Auto as the market leader in China's "all-electric small vehicle segment." It has sold more than 22,500 all-electric vehicles in China this year through October. (That may not sound like a lot, but consider: General Motors sold just over 17,000 Chevrolet Bolt EVs in the U.S. over the same period.)

What it means for Ford

It's an interesting venture. The market for small affordable electric vehicles in China is still small in terms of total sales, but stricter regulations on internal-combustion engines make it likely that it will grow quite large in time. This new joint venture will give Ford a stake in that market, which if nothing else will help inform its efforts to develop a line of Ford-brand electric vehicles for global markets. It's also good business: The Chinese government wants to see manufacturers building electric vehicles under Chinese brands; it's likely that Ford is earning some useful brownie points here.

Between Zotye, which has already staked out a share of the market as it exists today, and Ford, a global automaker with a reputation (in China, at least) for building premium, high-quality vehicles, the joint venture seems to stand a good chance of success. But of course, it's early days: If the market for these little vehicles grows significantly, other global automakers will enter the fray.

Zotye Auto is an addition to Ford's previously announced electric-vehicle efforts. The Blue Oval announced earlier this year that at least 70% of Ford-brand vehicles sold in China will offer "electrified" drivetrain options by 2025. ("Electrified" is Ford-speak for hybrids as well as fully electric vehicles.)

More broadly, Ford is known to be working on an accelerated plan to develop battery-electric vehicles. The company is expected to share details sometime in the next few months.

Zotye Ford will be Ford's third joint venture in China; it follows Changan Ford, which builds Ford-brand passenger vehicles, and Jiangling Motors, which builds commercial vehicles under the Ford and JMC brands.

The upshot: The new joint venture seems likely to enhance Ford's standing in China, and to provide useful information and expertise for its own electric-vehicle development efforts -- and it could be profitable in time, too.