Along with an edge-to-edge display.

The iPhone X launched less than a week ago, but it's never too soon to speculate what Apple (AAPL 2.54%) has in store for next year. Bloomberg reports that the Mac maker may be looking to bring two headline features of the iPhone X to its iPad lineup next year: an edge-to-edge display that removes the home button, and its Face ID facial recognition system.

While the iPhone X adopted OLED display technology for the first time, the forthcoming iPad is not expected to feature an OLED display. Not only are there technical challenges with implementing such a large OLED display, but it would also be incredibly expensive. Just look at how adopting OLED affected the estimated bill of materials (BOM) for the iPhone X, for example, and remember that costs rise exponentially with display size due to dimensional considerations. 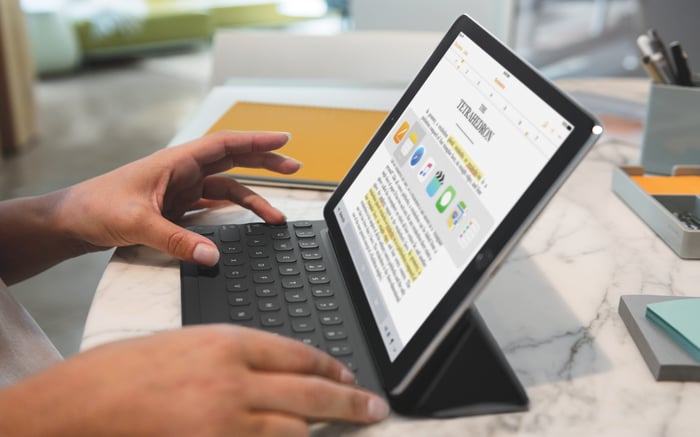 Once Apple picks new technologies, it hardly ever looks back

If there's one thing investors know about Apple, it's that it tends to go full steam ahead when it chooses a certain technological trajectory. Apple picks technologies that are "in their ascendancy," Steve Jobs once said. OLED certainly fits that description, but it might just take more time to balance the technical and cost considerations, which ultimately affect product pricing. The new iPad is expected to keep a traditional LCD display that is comparable to the 10.5-inch iPad Pro.

However, removing the home button in favor of more gestures is certainly doable (iOS 11 also features more touch-based gestures on iPad), as is adding a TrueDepth camera to the iPad, since the 3D-sensing module only costs an estimated $16.70. The constraints around TrueDepth we've been hearing so much about (but appear to have been blown out of proportion) related to production capacity at suppliers, not costs.

Now that Apple has started to transition from Touch ID to Face ID as its preferred biometric security protocol, even though it only recently added Touch ID to the Mac, the iPad is the ideal candidate to receive TrueDepth next.

Presumably, Apple will only include TrueDepth and Face ID on the iPad Pro as part of its continued strategy of segmenting the iPhone and iPad lineups, believing that greater differentiation can help justify premium pricing on higher-end models. CEO Tim Cook recently said, "The approach we've had from a product point of view, of bifurcating iPad and iPad Pro, is really resonating with our users."

With current iPad Pros, the main differentiating features are a ProMotion display that refreshes at much higher frequencies, as well as support for Apple Pencil and Smart Keyboard in order to make iPad Pro a potential laptop replacement. Adding Face ID alongside an edge-to-edge display could fit well into that strategy.