Citigroup (NYSE:C) has done a lot over the past decade to streamline its operations and reduce risk, but it's still one of the riskiest banks you can invest in. One place this shows up is in Citigroup's source of funds.

To understand this, it's helpful to remember exactly what a bank does. In fancy terms, banks arbitrage interest rates. They buy money at low interest rates and then sell that same money (by making loans) at higher interest rates, pocketing the difference. A bank is like a book store in this regard, but instead of buying and selling books, banks buy and sell money. 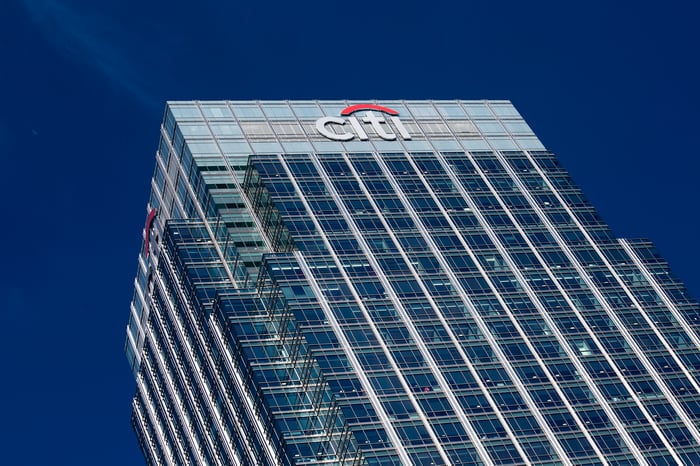 What matters for our purposes are the different places a bank can acquire funds to then lend out. The most common source of funding are deposits. There are different kinds of deposits -- corporate vs. retail, transactional vs. savings, etc. -- but as a general rule, deposits offer two advantages.

First, deposits tend to be cheaper than other sources of funds. In the third quarter, for instance, Citigroup paid 0.77% for money on deposit compared to 2.75% for its long-term debt.

Second, deposits tend to be more reliable. Whereas institutional lines of credit can be canceled if a bank runs into trouble, depositors have less reason to do so, given that the federal government insures deposits of up to $250,000 per person.

The other funding sources that I've alluded to come from other banks or institutional investors in the form of short-term and long-term debt.

Long-term debt is similar to a mortgage. It's debt with a maturity counted by years, not days or months. Short-term debt is the opposite, often needing to be rolled over by a bank on a nightly or monthly basis.

In terms of reliability, long-term debt is second to deposits, as it can't be withdrawn at will by the institution providing it. Short-term debt is another question, however, as lenders in short-term markets can simply refuse to rollover a bank's funds when the opportunity arises.

With this in mind, one way to gauge the relative strength of a bank's balance sheet, and therefore the risk of owning its stock, is to look at how much short-term funding the bank relies on. And it's here where Citigroup stands out, though not in a good way, as you can see in the chart above.

According to a recent presentation by Wells Fargo, no other big commercial bank relies as much on short-term funding as Citigroup does. In the third quarter, its short-term borrowings equated to 21% of its assets. That compares to 14% at Bank of America, 12% at JPMorgan Chase, and 5% at Wells Fargo.

The net result is that Citigroup is more vulnerable to liquidity risk than are other banks in its peer group. This doesn't mean that shares of the New York-based bank won't make for a good investment, but it does mean that you should be comfortable with risk if you buy them.