When Bank of America (NYSE:BAC) ran into troubles during the financial crisis, there was little reason for most of its depositors to worry that they'd lose their money. More likely than not, their deposits were insured by the Federal Deposit Insurance Corporation, or FDIC.

The FDIC was created during the Great Depression after thousands of banks failed, taking their customers' deposits with them. But the FDIC wasn't created just to compensate depositors; its more important purpose is to stop bank runs, where depositors line up en masse to withdraw their funds. 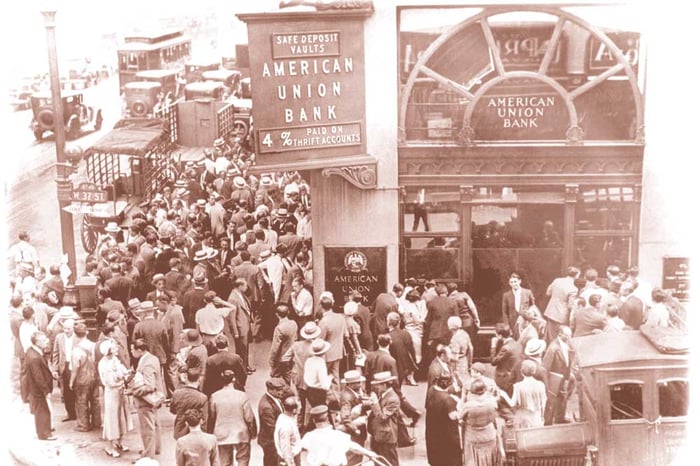 People line up outside a bank in the midst of a bank run during the Great Depression. Image source: FDIC.

Theoretically, the FDIC negates the impetus for a bank run. If the federal government insures the majority of most people's deposits, it doesn't matter whether a particular bank fails or not, because most depositors will get their money back. And if you can stop bank runs, so it goes, you stop most failures.

Today, the FDIC insures up to $250,000 worth of deposits for each person at each bank. If you have multiple accounts at a single bank, the balances are combined and insured up to the limit. But if you have accounts at multiple banks, they're not combined, meaning that a person could easily exceed the $250,000 maximum by scattering money across different financial institutions.

But while most people don't have a quarter-million dollars on deposit at a bank, that isn't true for corporations and high-net-worth individuals, which can have millions of dollars on deposit. As a result, while the FDIC does insure deposits at banks, it doesn't necessarily insure the entire amount of a bank's cumulative deposit liability. Bank of America serves larger clients than the average bank. With a sizable corporate banking business, many of its customers are Fortune 500 companies, which can have tens of millions of dollars on deposit at a bank at any one time.

To be clear, FDIC insurance isn't free, as banks have to pay deposit insurance assessments, which can run in the hundreds of millions of dollars for a bank like Bank of America. But still, the fact that the federal government backs such a large share of a bank's liabilities is a benefit when it comes to the general stability of the sector.