Ladies and gentlemen, a round of applause for Huntington Ingalls (NYSE:HII)!

On Wednesday, America's foremost naval shipbuilder reported a whopping $3.27 per share in net income under GAAP, easily cresting the $2.78-per-share target that Wall Street had set. Revenues, likewise, exceeded Wall Street's expectations, coming in at $1.86 billion -- $600 million ahead of estimates.

Investors applauded, sending Huntington Ingalls stock up 8% for the day. But was the news all it seemed to be on the surface? Let's find out. 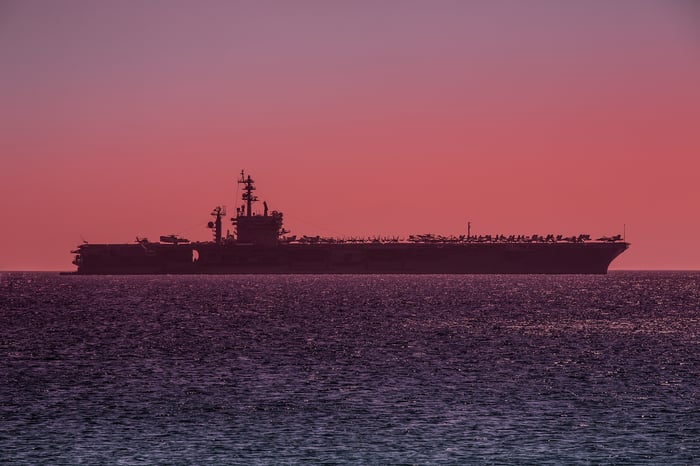 Huntington posted 11% sales growth in its fiscal third quarter, helped by the acquisition of security and cyber specialist Camber Corporation and its $364 million-a-year revenue stream, late last year. Operating profit margins on the company's $1.86 billion in quarterly revenue surged 230 basis points to 12.7%, leading to a 39% jump in net income for the quarter and a 44% boost to earnings per share.

At the "segment" level, Huntington Ingalls' greatest growth was seen in its relatively new "Technical Solutions" business -- not surprising, as that's where Camber's revenues were put. Huntington's TS unit enjoyed a 56% rise in revenue year over year, and 267% growth in operating profits on strong margins -- 9.1%.

Newport News Shipbuilding was Huntington's biggest revenue contributor and its second-best improver, posting an 8% gain in revenues, 9.1% margins, and a 41% improvement in profits. NNS is the Huntington business responsible for building big-ticket nuclear-powered aircraft carriers and submarines.

If I were a shareholder, I'd be looking to cash out and take profits after last week's strong price rise.