Shares of footwear retailer The Finish Line (NASDAQ:FINL) slumped on Friday following an analyst downgrade. This comes less than two months after the company reported its second-quarter results, which featured a comparable-store sales decline and slashed full-year earnings guidance. Finish Line stock was down about 12% at 11:30 a.m. EST.

Cowen downgraded shares of Finish Line on Friday, dropping its rating to underperform from market perform, and slashing its price target to $7 from $10. The reason for the downgrade was the belief that the company's promotional activity is unsustainable, which will hurt not only margins but also relationships with major brands. 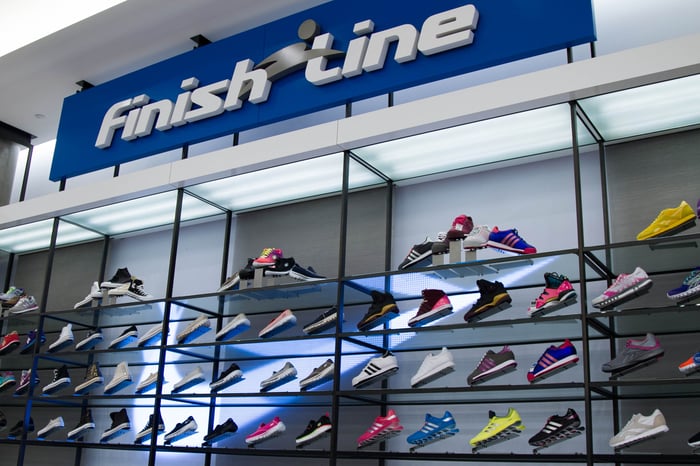 Through the first six months of 2017, Finish Line has seen its operating income tumble by 64% year over year, the result of comparable sales declines and a slumping gross margin. Gross margin was 28.7% in the first half of the year, down from 31.3% during the same period last year. This suggests that Finish Line is engaging in significant discounting.

Competition from online retailers and a shift toward direct-to-consumer for major brands like Nike have put Finish Line in a tough spot. Profits are in free fall as the company ramps up its promotional activity, and there was no sign in the second-quarter report that any aspect of the business is improving.

The stock is now down about 57% over the past year and 72% since peaking in late 2014. If Finish Line can't stabilize its business in the coming quarters, the stock could be headed even lower.