Today's consumers have high expectations, and companies like Nike (NYSE:NKE) are looking for ways to better serve and attract them.

As part of those efforts, Nike has unveiled its "consumer direct offense" as an answer to this evolving retail environment, but the way the company is implementing this major strategy is one thing that it's definitely doing right. 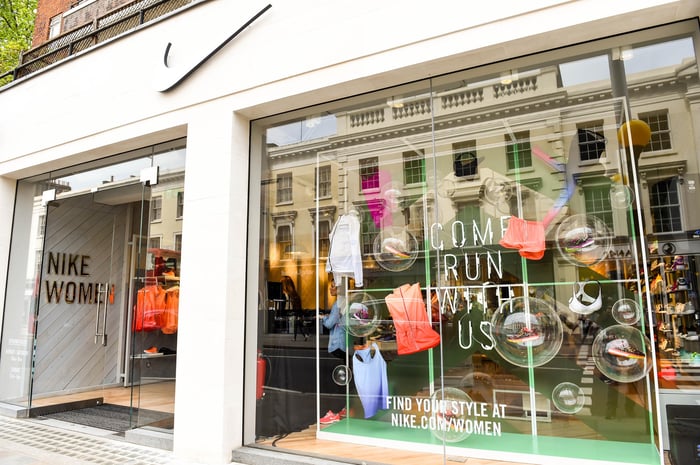 The challenge for retailers

Wholesale accounts for 72% of Nike-branded revenue, but growth has slowed, coming in at only 2% in fiscal year 2017. While the company is dependent on wholesale partners to sell its merchandise in "virtually all countries around the world," the company recognizes mounting challenges, and CEO Mark Parker laid out three insights that are driving customer behavior during the most recent earnings call:

First, the consumer appetite for newness and choice has never been higher [...] Second, consumers are choosing brands who lead with elevated service and new experiences [...] Third, consumers want the latest products faster.

The traditional supply chain the company used to bring its products to market via wholesale channels is no longer responsive enough -- Nike has to adapt or its customers will go elsewhere.

The answer is the consumer direct offense, or CDO.

In June of this year, the company declared that CDO "allows Nike to better serve the customer personally, at scale." In the most recent earnings call, Parker explained that the company is aligning all of its resources to bring product to market -- from "categories, design, products and merchandise all together as a full unit" -- via the direct-to-consumer channel.

CDO seems to be the right move for Nike, but I'm most impressed with how Nike has chosen to roll out this initiative.

Executed with "precision and focus"

Rather than a big bang, Nike has selected 12 key cities in 10 countries to implement CDO. Parker indicated that "these markets represent over 80% to NIKE's projected growth through 2020", and while they're not the largest cities in the world, they already have a strong company presence and plenty of visitors. Trevor Edwards, Nike Brand President, also talked about how "the cities are really the center of the action where you're seeing really trends drive from the city. You're also seeing the acceleration of expectations in those cities." A focused effort in these areas should help shape how Nike will meet the rising expectations of its customers going forward.

Having a relatively small set of focus markets also allows the company to prioritize resources and align the operations to make the efforts in those cities successful. There will be some growing pains, but tackling these changes with dedicated, empowered teams should help overcome them.

Lastly, because this effort is relatively small compared to the global breadth of Nike's wholesale partners, those partners should remain undisturbed. With slowing wholesale growth and retail headwinds, the company is caught between a rock and hard place. With CDO, Nike can continue to support its wholesale channel while evolving to engage directly with customers and boost growth.

Once the key regions are up and running, what's to stop the company from expanding its focus? The idea should be scalable as the company learns and optimizes its strategy.

But the question for investors remains: Does it work?

It turns out the company has already tested a flavor of CDO in London. During the 2015 investor day, former Nike direct-to-consumer president Christiana Shi explained how the team "... mapped the market ... where our category-specific consumers live, play, train, and shop, online and offline." Based on their findings, the team created a detailed plan to serve local customers. The company added package pick-up points around the city and opened a women's only Nike store. As a result of these various changes, Nike.com grew 68% in the area, and Shi added that "our London consumer is loving it."

Nike had similar success in Shanghai, so the bet on CDO is one that management can make with a growing track record and greater confidence.

CDO will drive how Nike delivers products to customers -- how they interact -- while maintaining strong relationships with the critical wholesale partners, as the company seeks to accelerate growth in the coming years.

In Pursuit of Growth, Nike Is Playing Offense to Win Over Consumers @themotleyfool #stocks $NKE Next Article
Current