French media conglomerate Vivendi (OTC:VIVHY) has interests in various entertainment assets, including Universal Music Group, and its recently acquired mobile game maker Gameloft, which was founded by one of the Guillemot brothers. That name might be familiar as they also co-founded the French video game publisher, Ubisoft (OTC:UBSFF), in the 1980s.

Vivendi has a history of investing in video game companies. From 2007 through 2013, it owned a controlling stake in Activision Blizzard (NASDAQ:ATVI), and now, Vivendi owns a 26% stake in Ubisoft and may be angling for a possible takeover of the maker of the popular Assassin's Creed franchise, according to Bloomberg.

This could present a problem for Ubisoft investors if Vivendi is successful. Ubisoft is doing great on its own, which is reflected in the stock's gain of over 600% over the last five years, and the France-based game maker could just be getting started. The last thing Ubisoft wants is a large conglomerate second-guessing its every move, especially when the video game industry depends mightily on creativity and risk-taking. 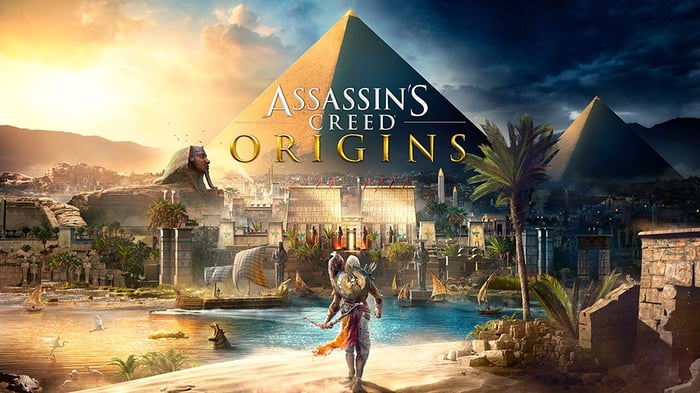 Ubisoft CEO Yves Guillemot recently explained in an interview with GameSpot why it's critical for video game companies to remain independent. Here's what he said:

Creativity, agility, and risk-taking is intrinsic to our industry. If you are independent, you know the level you can go to, but if you're part of a conglomerate that doesn't understand what your industry is, how fast it's moving, or the decisions you have to make at speed, they can limit your possibilities.

Vivendi sold the last of its Activision shares in January 2016 and shortly after purchased 24% of Ubisoft's shares. Bloomberg reported in June 2017 that Vivendi may attempt a takeover of the game maker by the end of the year, but those plans might have been thwarted by Ubisoft's recent 4 million share repurchase announcement, as well as an overwhelming show of support for management by the majority of shareholders at the recent Ubisoft annual meeting.

The problem that comes with a controlling shareholder

Considering the history between Vivendi and Activision, it's no wonder why Ubisoft management wants to remain independent.

Activision was controlled by Vivendi for five years but gained its freedom when an investor group led by Activision CEO Bobby Kotick bought most of Vivendi's stake for $5.83 billion in 2013. After five years of severe underperformance to the broader market, investors cheered the news, sending Activision's stock price up 15% the day after the announcement.

It wasn't a totally bad experience for Activision. In 2007, Vivendi's gaming segment -- which at the time owned Blizzard Entertainment -- merged with Activision, creating a powerhouse video game company. The merger brought together top franchises Call of Duty and World of Warcraft under the same corporate roof.

Vivendi received a 52% stake in Activision Blizzard in exchange for its contribution of Vivendi Games to the combined company. The addition of Blizzard was a game changer for Activision at the time, but Vivendi's control put Activision at a disadvantage compared to its rivals by having a major conglomerate, with a wide-ranging focus on different segments, looking over its shoulder.

The following five years saw Activision's stock price dramatically underperform the market despite a significant jump in its profitability as a result of the merger with Vivendi Games. 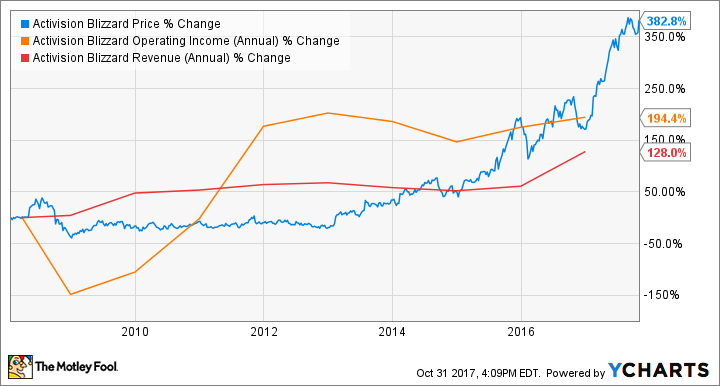 Since the buyout of Vivendi's controlling stake, Activision Blizzard has had its best run in company history with a flurry of new game releases that have had an enormous impact on growing the company's digital revenue and profits. Destiny, Overwatch, Hearthstone, and Heroes of the Storm have all been released after 2013. The acquisition of mobile game maker King Digital Entertainment in 2016 was the icing on the cake.

Ubisoft is positioned well for growth

It's in shareholders best interests that Ubisoft remains independent. Ubisoft co-founder and CEO Yves Guillemot sees a bright future for the company. Going by management's guidance, revenue is expected to grow 44% through fiscal 2018 (ending in March) over fiscal 2017, and margins should continue expanding from the growth of in-game purchases.

The game maker just released a new version of one of the more popular franchises in Assassin's Creed: Origins, and also released a game based on the South Park TV show called South Park: The Fractured But Whole. In early 2018, Ubisoft will strengthen its lineup even more with the much anticipated Far Cry 5.

Ubisoft has also spent the last few years rebooting popular franchises like the Tom Clancy shooter series, Rainbow Six, and Ghost Recon, which, along with the new games coming out, gives Ubisoft a large palette of hit games to reach its financial target over the next few years.

Guillemot along with his brothers founded Ubisoft in 1986. As a group, they own about 10% of Ubisoft's shares. So it's understandable why Guillemot doesn't want Ubisoft falling into the hands of a large media conglomerate that may not know the industry as well as him.