Sunrun Inc (NASDAQ:RUN) and Vivint Solar Inc. (NYSE:VSLR) seem to be heading in opposite directions in the residential solar market. Sunrun is doubling down on the lease/power purchase agreement (PPA) financing that has driven the industry over the past decade, while Vivint Solar is betting on loans and solar system sales.

The difference between the two could determine which company is a long-term winner for investors. But it's not clear right now which one has the better long-term strategy. The solar lease or PPA drove the solar industry over the past decade, in part because banks had no interest in financing solar systems with loans. Every major solar installer had a lease or PPA product, and that's how they financed rooftop projects.

But this financing has been driven by very aggressive assumptions around the discount rates and renewal of solar systems 20-plus years in the future. That risk can eliminate any value creation very quickly. That's why companies like Vivint Solar, SunPower, and Tesla have started transitioning to cash or loan financing. Sunrun, on the other hand, has doubled down on leases/PPAs.

How that bet will play out over the next 20 years is uncertain, but we can get an idea of the value on the balance sheet. In the table below, you can see Sunrun's estimates of value creation through the third quarter of 2017. If you take the net earning asset number ($1,186 million) and subtract the renewal value ($709 million), you see that net contracted value is $477 million for the company, which compares to its $663 million market cap today. 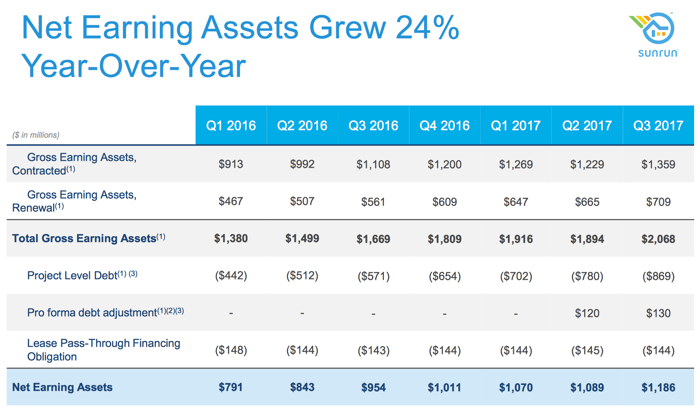 I think it's reasonable to pull out the renewal because there's no evidence that customers will renew a lease on 20-year-old solar equipment. In fact, it's likely it'll be less costly for a customer to make Sunrun take the old solar system down and install a new one, which could be costly for Sunrun. But the strategy is to build value from these long-term leases.

You can see in the chart below that Vivint Solar has taken the opposite approach, selling $29.2 million of solar systems last quarter, 22% of the company's 46.5 Megawatts (MW) of installations. This brings money in immediately and doesn't carry tail risk the way leases or PPAs do. 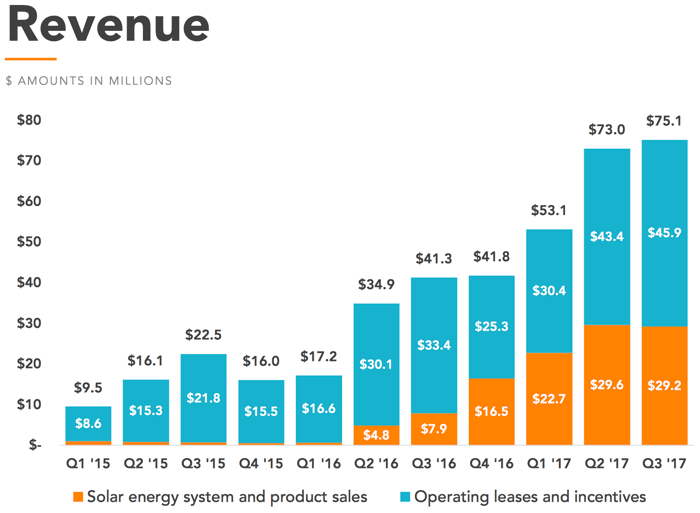 Gross margin on these sales was 24.2%, indicating that Vivint Solar would have barely covered sales and marketing and general and administrative costs. Sales aren't highly profitable yet, but with sales and marketing costs coming down, they soon could be.

Sunrun is the company the market sees as having the winning strategy today. And if interest rates stay low and investors continue to believe in the renewal value of residential solar systems, it could remain the winner. But very aggressive assumptions around discount rates and project values are a risk for investors over the long term.

Vivint Solar's strategy is lower risk but probably has less upside as well. Once a solar system is sold, there's no more margin to be generated, and the company can't benefit from things like renewals or securitization of assets.

It'll take a while to see how the residential solar industry shakes out, but for better or worse, the market thinks Sunrun's bet on leases/PPAs is the right one. Personally, I continue to have my doubts.