In a stock market in which it's getting harder to and harder to find good value stocks, diversified industrial manufacturer Dover Corporation (NYSE:DOV) might just fit the bill. It's a dividend investor favorite, and management has exciting plans to release value for shareholders in the future. Let's take a closer look at what makes Dover attractive for investors. Data source: Dover Corporation. Data in millions of US dollars.

A history of dividends and cash flow

Dover Corporation stock offers a near-2% dividend yield and is one of only six companies to have raised its dividend for the last 60-plus years. Moreover, there is ample room for dividend increases in the future.

The main reason Dover has progressively increased dividends is its excellent free-cash-flow (FCF) conversion. In plain English, this means the company tends to convert a high amount of its net income into FCF -- what companies actually have in order to reinvest in their business, pay off debt, or return money to shareholders via dividends or share buybacks.

In fact, on average Dover has converted 117% of its net income into FCF, and as you can see below its FCF easily covers the dividend payout. Moreover, management forecasts that it will convert 10%-11% of estimated 2017 sales into FCF. Using analyst estimates, the midpoint of the guidance produces around $820 million in FCF, and this covers the current dividend payout of around $280 million by nearly three times. 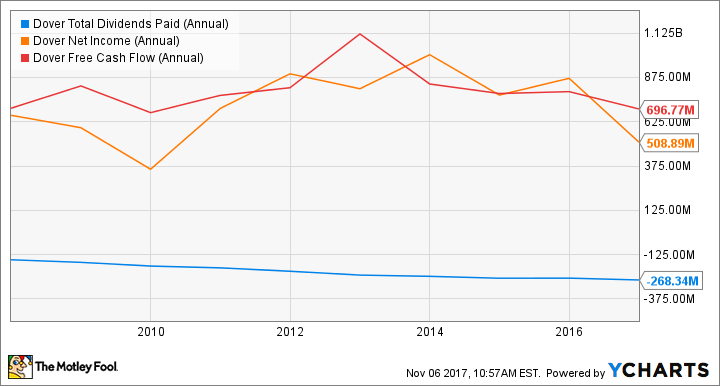 In short, Dover is a dividend aristocrat with a real opportunity to carry on increasing shareholder returns.

The stock is best known for being the industrial company with heavy energy exposure. In fact, as you can see in the first chart above, back in 2013 Dover was generating 35% of its segment income from its energy segment. That's fine if you want that, but the investing trend is toward companies focusing on core competencies rather than building out diversified conglomerates.

In this vein, Dover Corporation's recent announcement of its intention to separate its upstream energy businesses, together called Wellsite, is a positive. The so-called Wellsite businesses are responsible for around 72% of estimated 2017 energy revenue, and their divestiture would turn Dover into more of an industrial company.

As you can see below, this could lead to a rerating by the market -- Dover currently trades at a discount to its peers. Incidentally, all the companies in the chart are cited as competitors in Dover's industry niches, including Danaher Corporation (NYSE:DHR) (printing & ID in engineered systems) and Fortive Corp (NYSE:FTV) (retail fueling in fluids segment and vehicle service equipment in engineered systems). 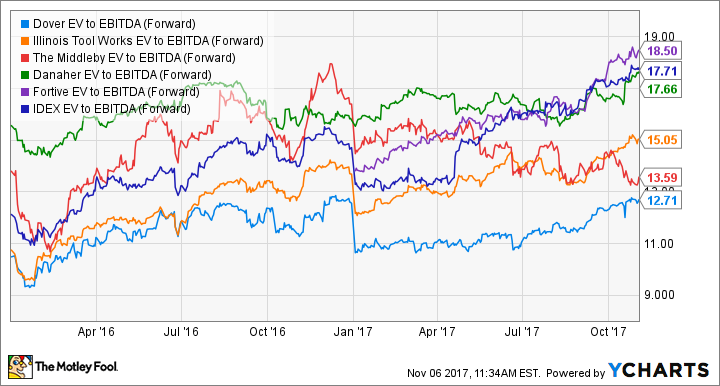 In fact, Danaher and Fortive serve as good examples of how Dover could release value. Fortive was separated from Danaher, and both companies now trade at a valuation premium compared to when they were one company. 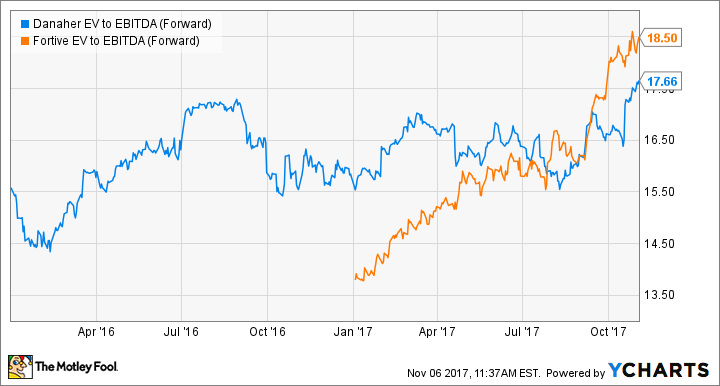 Part of the reason for this is that the remaining Danaher's medical, dental and life sciences revenue is far less cyclical than Fortive's industrially focused revenue, and separating them makes the investment proposition far clearer for both sets of businesses. In the same way, Dover can remove the cyclicality of upstream oil business for potential investors.

The third reason comes from the company's opportunity to expand margins. At its investor meeting in June, Dover's management outlined aggressive plans to expand total revenue by 4%-6% a year from 2016-2019 and segment margin by 350 basis points to 450 basis points (where 100 basis points are equivalent to 1%). Ultimately, this would increase segment profit by a whopping 50% in the period.

However, the 50% profit growth figure includes assumptions concerning energy segment revenue, which is highly correlated with oil drilling activity and therefore oil price movements.This adds a significant element of uncertainty to such forecasts because it's hard to predict oil prices.

Is Dover a stock to buy?

In my opinion, Dover isn't cheap on an absolute basis, but if you believe in relative valuation it's worth buying. FCF of $820 million represents around 4.5% of Dover's enterprise value in 2017. That's not cheap, but there is an opportunity for a rerating if Dover can separate its upstream oil businesses, as Danaher separated from Fortive.

All told, Dover could be a stock about to release value through restructuring. Moreover, its non-oil businesses have double-digit earnings growth prospects. Throw in a history of good FCF generation, a peer discount, and a well-covered dividend, and Dover is well worth a close look.