Shares of Sam Adams beer owner Boston Beer Company (NYSE:SAM) are on pause after the company recently reported additional sales declines in its third quarter. The company has been struggling against a tidal wave of new beer options on the market the last couple of years, and it looks like that trend has some legs under it. 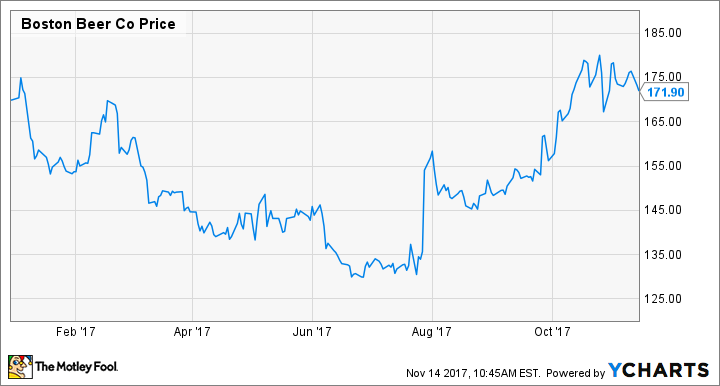 Year-over-year net revenue in the third quarter declined 2.5% to $247 million. The main cause was a 3.5% decline in depletions – a measure of shipments to distributors. That key figure isn't great, but it's an improvement over the figure last year at the same time, when depletions decreased 8%, and the steep drop that kicked off 2017. Depletions year-to-date are now down 6%. 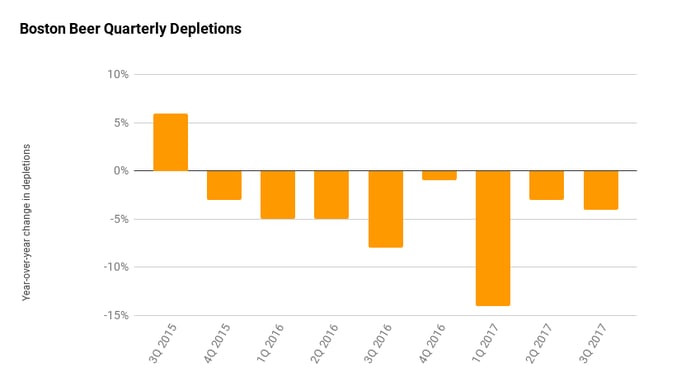 In spite of further market share losses, the company did manage a year-over-year improvement in profitability. Earnings per share were $2.78, a $0.30 increase over last year. The big jump is due to share buybacks in the last 12 months, a lower tax rate, and cost control. The last point helped gross profit margins on beer sold increase to 53.2% from 52.7% during the same period in 2016.

In short, the third quarter was mixed. Sales fell, but profits rose as Boston Beer trims out non-essentials.

The latest in the craft industry

Boston Beer's declining sales help illustrate the huge number of options craft beer aficionados have to choose from. According to the Brewer's Association, an industry research and resource group, there were 1,574 breweries in the U.S. at the end of 2008. At the end of 2016, that figure had grown to 5,301.

The company has acknowledged the issue, and Chairman and founder Jim Koch reiterated that during the latest report:

We remain challenged by the general softening of the craft beer and cider categories and a competitive retail environment with a lot of options for our drinkers. Our leadership team continues to make strides to address these challenges. During the quarter, we have had better focus and execution at retail around our fall seasonal program, which appear to have helped our Samuel Adams Octoberfest trends.

Besides advertising changes around the Sam Adams and Angry Orchard marquees, Boston Beer has had success with new products like Truly Spiked & Sparkling hard sparkling water and Twisted Tea hard iced tea. These new brands are still small, though, so innovation for the flagship Sam Adams is a must. A new lager ale and IPA are to be released shortly, as is a rose for the Angry Orchard cider label. 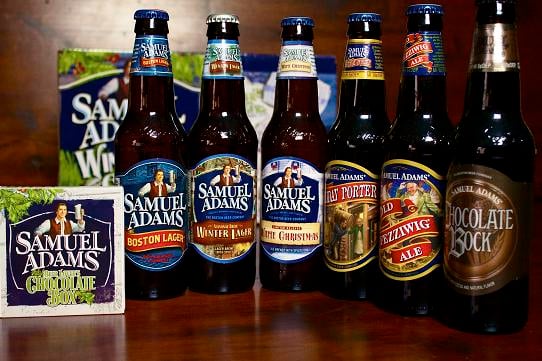 A new beer and cider production run will hardly be a sure success, though, as other smaller and more nimble craft brewers continue to churn out a steady stream of new product. The competition isn't just small either. Budweiser parent behemoth Anheuser-Busch InBev (NYSE:BUD) is competing in the hard sparkling water segment with SpikedSeltzer and holds market share lead in premium tea with Teavana, for which it has a partnership with Starbucks. Corona beer parent Constellation Brands (NYSE:STZ) is getting even more creative with its innovation, recently taking a 9.9% stake in a Canadian marijuana company.

Boston Beer stock had been on an upswing since late August, but I fear that bounce is only temporary. The company's sales figures would suggest that when the Brewer's Association releases 2017 figures, they will show another annual increase in the number of brewers in the U.S. At the very least, existing brewers are increasing their distribution and trampling all over Boston Beer's territory.

Add to that fact that big brewers are also innovating and have successfully integrated craft brewing operations of their own into the mix. Getting squeezed in the middle, it looks like the pain for Boston Beer could continue.