If planning the perfect getaway is all about timing, it's fair to say that Despegar.com (NYSE:DESP) couldn't have gone public at a worse possible time. Market sentiment has soured on travel portals, weighing on the initial interest for the Latin American travel specialist.

Germany's Trivago (NASDAQ:TRVG) -- the last major online travel site to go public -- has shed 70% of its value since peaking four months ago, hitting yet another all-time low on Monday. Destination reviews hub TripAdvisor (NASDAQ:TRIP) has plummeted 72% since topping out three years ago. Even market darlings Priceline (NASDAQ:BKNG) and China's Ctrip.com (NASDAQ:TCOM) have proven mortal, currently fetching 17% and 22%, respectively, less than their summertime highs.

Despegar will get its first real test as a public company when it reports financial results on Thursday afternoon. Its third-quarter report will be the travel site operator's first earnings announcement since going public in September, and naturally there's a lot riding on the market's first impression. 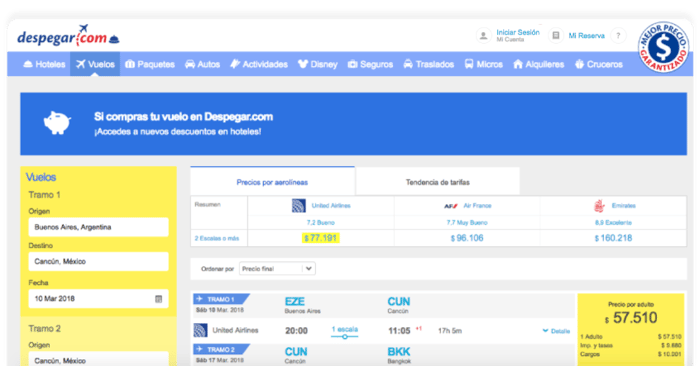 Despegar.com and its Brazilian sister site Decolar.com translate as "take off" in Spanish and Portuguese, respectively, but the stock itself hasn't had much of a chance to get off the ground. Despegar went public at $26 in mid-September, and it's trading only marginally above that now. Wall Street cooling on travel sites including Priceline and Ctrip hasn't helped, but the deep wounds at Trivago and TripAdvisor stem from model-specific lapses.

A lack of consistent growth at Despegar may also explain the market's lack of enthusiasm. It may be the leading online travel agency in Latin America, but Despegar saw its revenue decline slightly in 2016 with year-over-year dips in each of the year's four quarters. Growth has resumed in 2017. Revenue has risen 28% through the first half of the year. Analysts are targeting $128.9 million in Thursday's report, up 22% since the prior year's third-quarter showing. It would be top-line deceleration relative to its upticks through the first half of the year, but another welcome respite from last year's sluggishness. Wall Street's holding out for a profit of $0.15 a share, and it would be Despegar's sixth consecutive profitable quarter.

Despegar's uninspiring performance in 2016 was the handiwork of a drop in air ticketing revenue, something that isn't a surprise given how socioeconomic and inflationary factors have curbed international travel in some Latin American countries. Clearly, Despegar's results are improving with what should be its third straight quarter of double-digit revenue growth in Thursday's report.

The long-term prognosis is good. Euromonitor International sees the entire market for online travel bookings in Latin America growing from $29.7 billion in 2016 to $47.6 billion come 2020. Despegar should continue to be the main beneficiary of the trend, and ideally even gain market share along the way.

Investors will learn a lot about Despegar on Thursday. It will need to sustain its growth and profitability if it doesn't want to join Trivago as a broken IPO.