Cimpress stock rose during October in anticipation of fiscal first-quarter 2018 earnings, which were released on Nov. 1. Investors' enthusiasm persisted into the new month, as the stock climbed another 10% from the beginning of November to date.

The company reported a vigorous revenue increase of 27% over the prior-year quarter, to $563.3 million. Stripping out currency exchange fluctuations and the effects of acquisitions and dispositions, organic revenue increased at a still-healthy rate of 12%.

The bottom line also showed improvement. Operating income of $46.6 million included a $47.6 million gain from the sale of Cimpress' "Albumprinter" business. After removing this gain, the near-flat operating income represents an improvement over the comparable quarter's operating loss of $27.8 million.

While these results supported investors' favorable investment thesis, Cimpress also received a boost from its plans to trim overhead from its Vistaprint, announced alongside earnings. Earlier this year, the company decentralized its operating structure, which resulted in the transfer of roughly 3,000 employees to the Vistaprint business. Now, it has decided to execute a bit of a U-turn, reducing head count and streamlining operations at Vistaprint.

Cimpress isn't wasting much time: The reductions will occur over the next two months, resulting in a charge of between $15 million and $17 million within the current quarter. However, the company expects the exercise to reduce fiscal 2018 operating expenses by $20 million to $22 million. 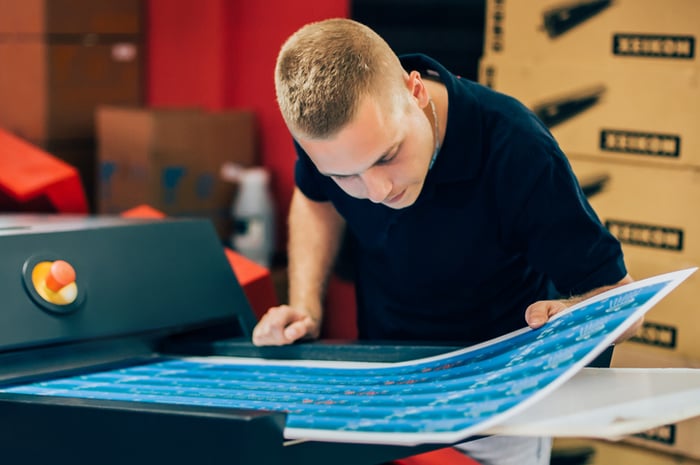 Margins at Vistaprint, which as a unit still comprises about 56% of total company revenue, remain a concern. In the earnings release, CFO Sean Quinn noted that the rapid expansion of design services and product innovation resulted in a 400-basis-point gross margin decline within Vistaprint in the first quarter. Quinn pointed to multiple pricing opportunities in 2018 as a partial antidote, but still cautioned investors that Vistaprint's margin recovery will take some time.

in order to diversify its top line, Cimpress is also trying to shift some revenue to lower-margin businesses including its "Upload" and "Print" segments. But given the company's brisk revenue growth as of late, shareholders don't seem very worried about temporarily compressed profits throughout the business.