Redfin's (NASDAQ:RDFN) second earnings report as a publicly traded company was vastly different than its first. Instead of continuing to rally, the stock rapidly reversed course, falling approximately 10% in the post-earnings trading session. The online realtor beat estimates for adjusted earnings per share of $0.11 by a penny, but reported revenue of $110.3 million, missing analyst estimates at $109.5 million. The company looked worse on a GAAP-compliant basis, reporting a loss of $0.50 per share, versus a gain of $0.03 in 2016's third quarter.

It's been a volatile year for the stock. Redfin has produced gains of approximately 40% since its initial public offering in July. However, the entirety of those gains happened in the first day of trading. If you remove the first day gains, shares of Redfin are down for the year. So what should investors make of the company's path forward? Here are three key takeaways from the third quarter. 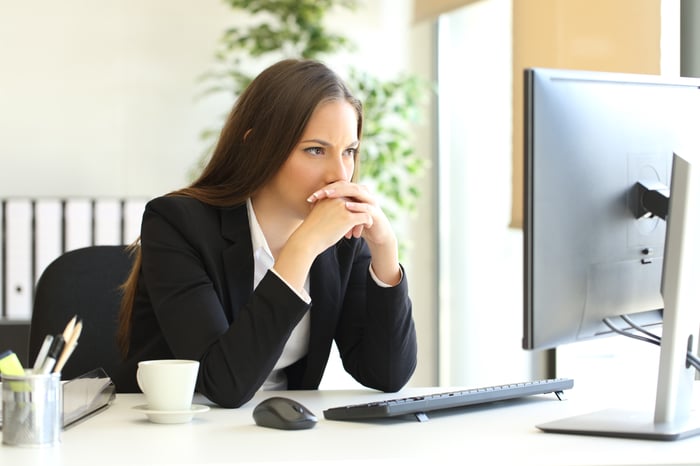 Redfin is now a broker-dealer

Until now, Redfin has been a broker, connecting buyers and sellers and facilitating the sales transactions. This quarter the company became a dealer with its Redfin Now service. The company buys homes on its own behalf and sells them alongside broker-listed inventory. During this quarter, the Redfin Now service added $3.4 million to the top line.

There are a few things investors should note as Redfin grows this business. First, Redfin Now will change the gross margin profile as the revenue is recorded on a gross basis, and amounts paid for the home and improvement costs are included in cost of revenue. Partially due to Redfin Now, gross margin fell from 38% in the third quarter of 2016 to 36% in this year's corresponding period.

Another thing investors should be wary of is customer satisfaction and the potential for conflicts of interest. There's always a risk when a broker becomes a broker-dealer. Many sellers are fearful a brokerage will favor its own inventory in a broker-dealer arrangement. It's important for investors to continue to monitor market-share metrics to ensure Redfin Now isn't negatively affecting the core brokerage business.

In the third quarter, this wasn't an issue, as Redfin's market share was 0.71%, a 0.14-percentage-point increase from 2016's corresponding quarter.

High-volume is trying to meet high-service

In addition to Redfin Now weighing on margins, so is a change in the company's core brokerage business. Margins in the core business decreased to 38.1% from 39.4% 2016's comparable period as lower close rates weighed on results. For next year, Redfin is lowering the number of customers each Redfin agent serves to increase closing rates while adding more agents to the payroll.

CEO Glenn Kelman expects gross margins to change very little between now and 2018, with improvements occurring in 2019 and beyond. Investors should continue to watch margins in the core business. Redfin was always positioned as a low-cost, high-volume brokerage as compared to the traditional business model. Lowering the number of customers per agent could lead to further depressed margins if closing rates do not increase.

Higher-quality service could certainly increase closing rates and total sales, but often these things are more influenced by outside factors like interest rates, inventory and selection, family formation, etc. Investors should continue to monitor conference calls to ensure this change of strategy is leading to better performance.

Kelman is wagering on hiring more agents due to strong increases in engagement. Traffic to Redfin's website and mobile application is up 38% year over year, more than its 35% revenue gain and more than the traffic growth of its major competitors. Better technology may be the reason for the increase. Kelman noting lowering wait times on the company's online chat has led to more in-person meetings with its realtors. If this continues to be successful, the company will roll out the program nationwide. Retail investors should continue to monitor the online site for improvements in technology.

Where does the company go from here?

The reason Redfin sold off so harshly is the company is cursed with high expectations. Wall Street analysts question its business model. Analysts from Oppenheimer noted, "the company has a history of unprofitable operations and may never become profitable in the future." An investment in Redfin is more than a bet on company management -- it's also based on continued change in consumer behavior leading to increased scalability. Personally, I'm putting the company on my watch list until I see signs it can achieve reliable profitability.