For the first several years after its IPO, it seemed like Spirit Airlines (NYSE:SAVE) could do no wrong. The company's industry-leading cost structure and focus on maximizing ancillary revenue allowed it to earn strong profits while charging extremely low fares. This enabled Spirit to steadily gain share from the legacy carriers, which were focused on keeping prices high to offset rising fuel costs.

More recently, the legacy carriers -- especially American Airlines and United Continental -- have shifted toward an aggressive price-matching strategy. This has led to steep unit revenue declines at Spirit Airlines. As a result, its profit margin has started to sag and its stock price has plummeted. 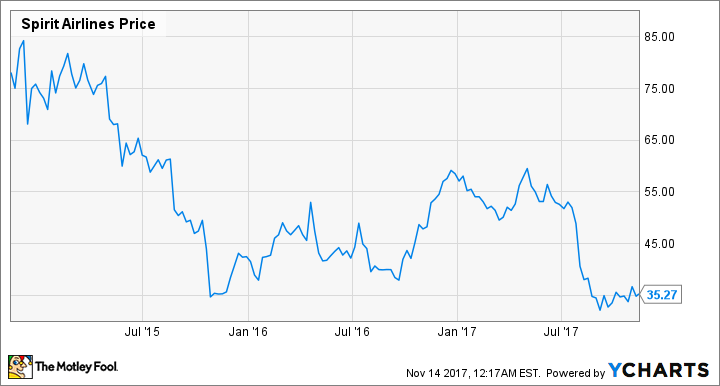 Spirit Airlines isn't backing down from this fight. Management believes that Spirit's massive cost advantage over the legacy carriers will eventually allow it to prevail. However, Spirit isn't about to shoot itself in the foot, either. As a result, the company is increasingly focusing its growth on markets where Southwest Airlines (NYSE:LUV) will be its main competitor.

The logic of competing with Southwest

One reason why the legacy carriers are doubling down on price-matching (albeit with a spotty track record) is that they have rolled out new bare-bones "basic economy" fares recently. Meanwhile, Southwest Airlines continues to offer perks like free checked bags and no change fees with every ticket.

By contrast, a Spirit Airlines ticket gets you virtually nothing other than a spot on the plane. (If you want a particular spot on the plane, you'll have to pay extra for a seat assignment!) The vast difference between the two carriers' business models makes them great competitors. Travelers can choose whether they want a reasonably priced, all-inclusive fare or an even cheaper fare that comes with fees for various optional services. Spirit Airlines seems to have realized that competing against Southwest may be easier than competing against legacy carriers. It began to shift its growth toward more Southwest Airlines markets earlier this year. Spirit's recent route announcements indicate that it is continuing down this path.

In the past week, Spirit has started operating a dozen new routes. It will compete with Southwest Airlines on more than half of them, whereas only two routes overlap with American Airlines flights and only four overlap with United Airlines service.

Will this strategy shift work?

Spirit Airlines' third-quarter results were disappointing. However, this shouldn't count as a mark against its new route strategy, as the carrier's move into midsize cities (where Southwest Airlines tends to be dominant, rather than one of the legacy carriers) has just begun. Instead, Spirit's profit decline simply highlights that it remains vulnerable to competitive actions by its legacy carrier rivals.

Southwest Airlines does have one of the better cost structures among U.S. airlines. Nevertheless, its non-fuel unit costs were 38% higher than Spirit's over the past year (including some industry-standard adjustments). Between this cost advantage and its higher ancillary revenue generation, Spirit Airlines should be able to profitably undercut Southwest Airlines' fares.

The results should be good for air travelers and good for Spirit Airlines. That doesn't necessarily mean Southwest has anything to worry about, though. At worst, Spirit will skim off a small slice of its business in some midsize cities. For the most part, Spirit Airlines fills its planes by stimulating demand, as lower fares encourage more people to travel.

In fact, Southwest is well-positioned to capitalize on the additional traffic that price competition with Spirit Airlines would stimulate. Thus, Spirit's new strategy could be good for just about everyone involved.