After Coca-Cola (NYSE:KO) reported its third-quarter results, its leadership team shared some important information with investors during the subsequent conference call. Here are the highlights for long-term shareholders.

Now while we see various opportunities and challenges in each of our markets, one thing is consistent across all of our businesses: the consumer landscape is changing. We see an increasing number of small and fast competitors. Consumers' desires are revolving, whether they're seeking low- or no-sugar options, drinks with functional benefits or simply more variety. In order to thrive in this kind of environment, we need to be more entrepreneurial and agile to take intelligent risks and build a broader, consumer-centric portfolio. -- CEO James Quincey

Rather than simply a soda business, Coca-Cola sees itself as a "total beverage company." It's expanding into new categories, such as its recent acquisition of the U.S. rights to Topo Chico, a premium sparkling mineral water from Mexico that has earned a strong following in Texas. Coca-Cola is also using a more localized approach, in which it tailors its product lineup based on consumer tastes in each market. In turn, the company believes that these strategies will allow it to be more flexible and better able to adapt to changing consumer preferences.

2. Establishing a beachhead in adult beverages

[W]e're looking at opportunities in growing premium segments such as adult craft beverages. As you know, more consumers, most notably adults, are seeking unique and distinct products with sophisticated flavors, quality ingredients, and smaller-scale crop production. Mixes are seeing a resurgence in many parts of the world as part of this trend. -- Quincey

Coca-Cola is already a global leader in bottled water, fruit juices, and sports drinks, and now it's setting its sights on the adult-beverage market. The company recently introduced a line of premium mixes that can be added to alcoholic beverages. But while these mixers may add an element of growth to its business, the more intriguing question is whether they signal a larger move into the alcoholic-beverage market in the future.

Rumors have swirled in regard to a potential merger between beer giant Anheuser-Busch Inbev (NYSE:BUD) and Coca-Cola. Such a blockbuster deal could be difficult to pull off and would face regulatory scrutiny. Yet Coca-Cola's recent moves into the adult-beverage category may suggest that a deal could be more likely than many investors currently expect. 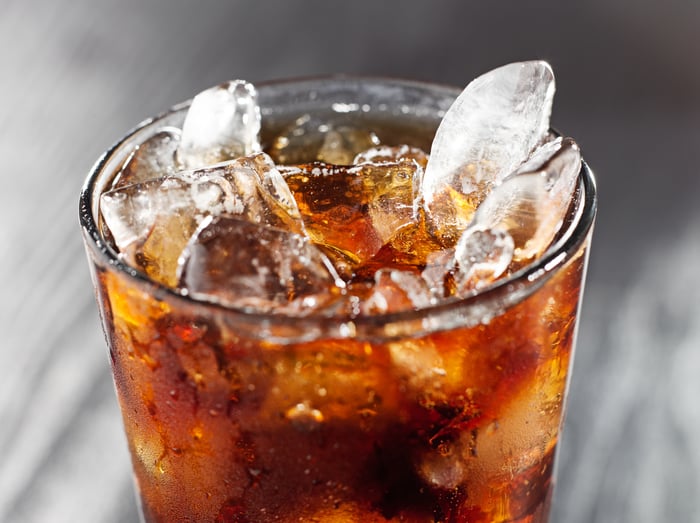 Now while innovating and growing small brands in these new categories is critical, it is only part of the equation. That's why we're continuing to invest in our core billion-dollar brands to drive relevance. We increased our media investments behind our sparkling brands before moving aggressively into non-sparkling categories, and we will continue to innovate within these core brands as well. For, in the end, a healthy core will fuel our expansion as a total beverage company. -- Quincey

One example of a soda brand currently enjoying success is Coca-Cola Zero Sugar. Coke relaunched the brand in the United Kingdom last year with a reformulated product, new packaging, and an aggressive marketing campaign, which has resulted in "double-digit" growth. Encouraged by these strong results, the company rolled out Coke Zero Sugar to other markets around the world, including the U.S., in the third quarter. Since that time, Coke Zero's sales trends in the U.S. have seen a "meaningful acceleration." Moreover, year-to-date global volume and revenue for the brand is "growing double digits."

4. Refranchising its way to greater profits

As we approach the end of 2017, we're nearing the completion of the refranchising process. In the U.S., our refranchising will be complete when the Tri-State Operating Unit and the West Operating Unit transactions close, which we expect to be in the coming weeks. This will leave Canada to be refranchised, and our expectation is to transition to a partner in 2018. Also, in early October, we closed on a transaction that makes our company the majority owner of Coca-Cola Beverages Africa. As we'd previously disclosed, we're in discussions to refranchise this territory and also expect this to happen in 2018. -- Quincey

Subsequent to its earnings call, Coca-Cola announced the completion of the refranchising of its bottling operations in the U.S. Now the company is turning its sights on its remaining international bottlers.

These refranchising efforts -- in which Coca-Cola sells its company-owned bottling businesses to third-party partners -- have weighed on revenue, including a 15% decline in comparable net revenue in the third quarter. However, they're also helping to boost Coca-Cola's profitability; comparable gross and operating margins increased more than 150 and 400 basis points, respectively, primarily because of the cost savings associated with bottler divestitures. As such, Coca-Cola is now a higher-margin, more capital-light business, which should allow it to produce stronger returns on invested capital.

5. Coca-Cola is a cash-generating machine

We generated $4.7 billion in free cash flow year-to-date and have returned that excess cash to our shareowners. Year to date, we've returned $3.2 billion in the form of dividends, reflecting a 6% increase in our dividend this year and $1.7 billion in net share repurchases. -- CFO Kathy Waller

Coca-Cola excels at turning sugar water into cash for investors. The company extended its streak of annual dividend increases to 55 years earlier this year -- a streak that's likely to continue for many years to come. And with its bountiful current yield of 3.2%, Coca-Cola makes for an intriguing stock for income-focused investors to consider.