Sooner-than-expected completion of its Sabine Pass facility is putting the LNG exporting business into service ahead of schedule.

This past quarter was a major milestone for liquefied natural gas exporter Cheniere Energy (LNG 0.70%) as the company completed the first phase of construction at its Sabine Pass facility. What's even more impressive is that management was able to raise guidance as a result despite another quarter of losses.

Here's a rundown of Cheniere's most recent results, what led management to raise guidance, and some of its plans coming down the pipe. As impressive as Cheniere's revenue growth has been over the past couple years, we have to keep in mind that the company is still very much in the early innings of its vision as a LNG export titan in the U.S. This past quarter, we saw revenue grow by just under $1 billion year over year, but there were some nonoperating costs that sunk the bottom line. The most significant impact was $379 million in net income for the quarter attributable to noncontrolling interest related to the conversion of subordinated shares owned by its subsidiary, Cheniere Energy Partners Holdings (NYSEMKT: CQH). Absent that noncash charge, the company reported net income of $90 million.

One reason that management is confident that next quarter will be better than this one is that the company continues to complete construction of its Sabine Pass facility ahead of schedule. Cheniere announced it had completed construction and testing of the fourth liquefaction train in October and started selling commercial volumes more than five months ahead of schedule. While the fourth train won't start delivering cargoes under its long-term takeaway contract until the second quarter of 2018 as originally planned, management will be able to sell production from train four to the spot market.

The rest of the quarter went according to plan. Construction at Sabine Pass' train five the Corpus Christi facility both remain on schedule, and the company has all the regulatory approvals in place for Train six at Sabine Pass and Train 3 at Corpus Christi to start pursuing commercial deals.

The most significant news to come out of this report was the announcement that management had started the regulatory approval process for another expansion of its Corpus Christi facility. With this new expansion, the company plans to use a new plant design. Rather than building fewer, larger liquefaction trains, this expansion project will be seven midscale LNG liquefaction trains with 1.4 million tons of production capacity each for a total of 9.5 million tons per year. If all of Cheniere's proposed expansion plans get approved, it would have 50 million tons per year of liquefaction capacity, making it one of the largest LNG exporters in the world. 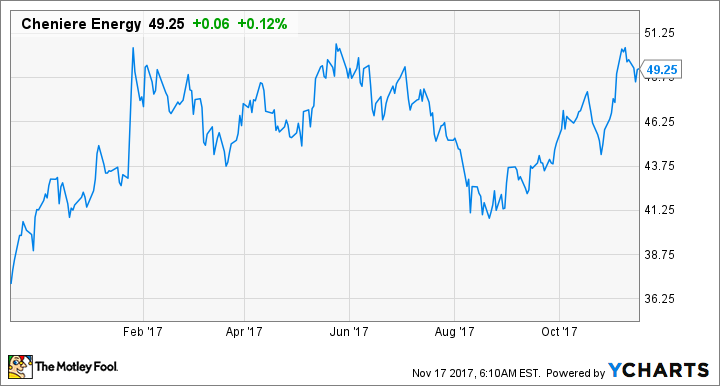 Here's CEO Jack Fusco on why management felt comfortable raising guidance for both this and next year.

[W]e are again increasing our full year 2017 guidance and are introducing our guidance for full year 2018. The third quarter was highlighted by the commencement of our long-term contract with Gas Natural Fenosa and the successful commissioning of Train 4 at Sabine Pass. Train 4 recently achieved Substantial Completion, and we've now brought the first four Trains online in less than 17 months, all of them ahead of schedule and within budget.

We are revising our 2017 guidance upward as operating results continue to exceed earlier expectations, and we have greater certainty on results as we approach the end of the year. Our 2018 guidance range is driven primarily by LNG production scenarios at Sabine Pass and expected market pricing for LNG during 2018.

As good as Cheniere Energy's results look on paper now, it still has a lot more growth planned over the next few years. This is basically the company running at half speed -- or even less if all of these expansion projects get the green light. The addition of the Corpus Christi expansion plan gives it an even longer growth runway and should be much easier to handle financially now that it has an operating income stream in the billions of dollars.

Cheniere Energy has been a polarizing stock for a long time. Even though the stock still trades at a lofty valuation -- enterprise value to EBITDA is at 26.7 times today-- the company's growth plan looks much more certain than it did years ago and it looks like it could grow into that valuation sooner than expected.