The Dow Jones Industrials (DJINDICES:^DJI) have had a strong 2017, adding to their gains over the past nine years and rewarding those investors who stuck with the stock market in the aftermath of the financial crisis. Yet even though the Dow has 30 stocks that are among the largest and most influential in the U.S. economy, the fact that the index is a price-weighted average means that some of its components have almost no impact on the Dow's movements.

In particular, the share prices of Pfizer (NYSE:PFE), Cisco Systems (NASDAQ:CSCO), and General Electric (NYSE:GE) have gotten so low in relation to their peers in the Dow that they almost might as well not be in the average at all. Below, we'll take a closer look at these three companies to see how they're actually doing in light of the Dow's solid performance this year. 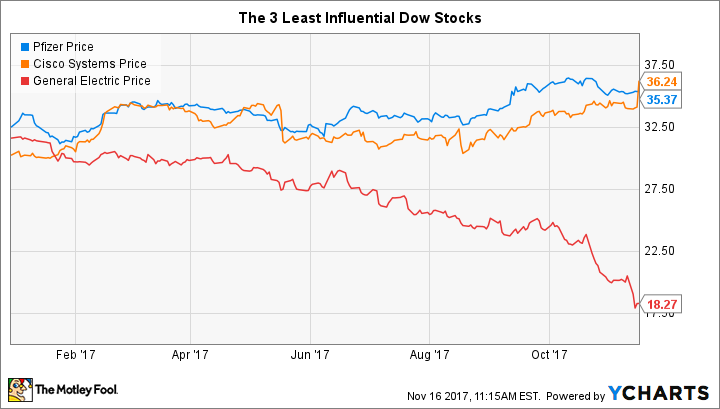 Pfizer has had a solid year so far, with its stock having risen about 9% since the beginning of 2017. The pharmaceutical giant has seen considerable success with newly launched treatments like its Ibrance breast cancer treatment, and a healthy pipeline of nearly three dozen drugs in late-stage clinical trials promises to produce some additional blockbusters in the near future. In addition, Pfizer is looking at potentially spinning off its consumer healthcare business into a separately traded entity, allowing the company to concentrate more heavily on its core pharma business.

Despite Pfizer's rise this year, the stock remains around $35 per share, and that gives Pfizer a weighting within the Dow Jones Industrials of only about 1.05%. That's less than a third of the influence Pfizer would have if the Dow were an equal-weighted index, and the drug giant's $210 billion market capitalization would also warrant a greater impact using traditional cap-weighted methods. With two other Dow components producing pharmaceuticals and having higher share prices, Pfizer hasn't made its presence felt in the Dow's moves for quite a while.

Cisco Systems is the best performer of these three, having risen nearly 20% so far in 2017. Yet many investors were disappointed with Cisco in light of much better returns for many of its tech industry peers. Sales and net income were down compared to the previous fiscal year, and Cisco lost market share in key areas like routers, switches, and other networking hardware equipment. Growth in the promising security business slowed, and efforts to make smart acquisitions didn't pan out as well as some had hoped.

A recent jump took Cisco's share price just above that of Pfizer, but for much of the year, the stock has traded in the low $30s, and it also has about a 1% weighting within the Dow Jones Industrials. Several other Dow stocks are leaders in various niches within the technology sector, and Cisco's $180 billion market cap is relatively modest compared to some of them. At this point, the performance of the networking giant is inconsequential compared to the influence that peers in areas like smartphone manufacturing and office software have on the Dow.

General Electric has been the worst performer in the Dow this year, falling more than 40% and suffering from a host of troubles. The company has gone through a leadership transition, cut its dividend by 50%, and continues to struggle with sluggish performance in several of its key segments. In particular, the poorly timed shift in emphasis toward the energy industry has proven difficult for General Electric to recover from, and GE's size is making it tough to forge a new strategic direction that it can quickly adopt to turn things around.

General Electric stock has fallen below $20 per share, and that gives the company about 0.5% in influence over the Dow. Some believe that the industrial giant's days in the average might be numbered, but even with its plunge, GE still has a market cap of $160 billion. Much will depend on whether General Electric makes some aggressive moves to emphasize areas of strength while doing its best to limit its losses on poorer-performing businesses.

Know what the Dow is

As a price-weighted average, the Dow Jones Industrials largely ignores some of its 30 components while overly stressing the success or failure of others. If General Electric, Cisco Systems, and Pfizer look promising to you, then just realize that you'll have to look beyond the performance of the Dow to see how those stocks are really doing.