Michael Castagna took over as CEO of MannKind Corporation (NASDAQ: MNKD) on May 25, 2017, after serving for around a year as chief commercial officer. At the time, the biotech had lost more than half of its market cap in less than five months, with a share price near $1.40. Since then, MannKind's market cap has increased by more than 120%. It's been one of the hottest biotech stocks on the market over the past few months.

I had the opportunity to interview Castagna recently about MannKind's past and current challenges, and about what the near term could look like for the company. Our discussion on the company's longer-term prospects will be featured in a forthcoming article. Comments have been edited lightly for clarity, flow, and length. 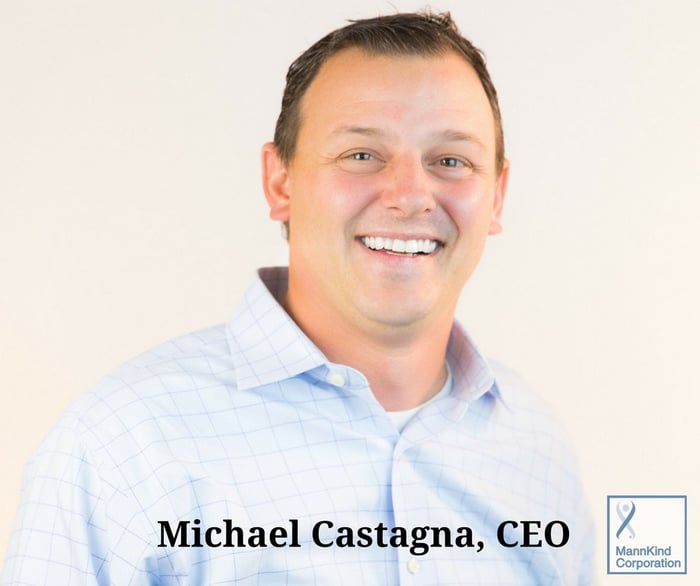 Keith Speights: The Sanofi (NASDAQ:SNY) deal was before your time at MannKind, but why do you think Sanofi wasn't successful in its commercialization of Afrezza?

Michael Castagna: In general, you usually take years to prepare for a drug launch. Remember the drug was approved in roughly April 2014, licensed in August 2014, and launched six months later in February 2015. So basically, the Sanofi team had six months to prepare a launch, which you normally take years preparing. That was probably the biggest challenge to begin with.

And then they brought over a person from Europe to head up the launch who didn't have a lot of experience in the U.S. market. So when it came to making decisions around pricing and managed care strategies and reimbursement, you know it's a very different healthcare system in the U.S. versus Europe.

It wasn't the No. 1 priority that Sanofi had. They had another major drug launch in cardiovascular disease with Praluent. And they had another major threat against Lantis with a biosimilar from Lilly. So they were preparing to defend Lantis by launching Toujeo. So they just had a lot of other priorities. Having worked in large companies for most of my career, having two big launches in a year is tough enough rather than having three. So this probably was just their third priority, is my guess.

It's [Afrezza] not like regular insulin. They tried to think about how to use sub-q [subcutaneous] insulin and said, "I know how to use sub-qs; that's how I'll use Afrezza." And it's a different product. It's got different dosing. You use it at mealtime, but it's not a 1-to-1 ratio. I think that the No. 1 mistake that they made out the door was not talking about the PK/PD [pharmacokinetics/pharmacodynamics] and the difference -- how you would think about the dosing and titrating up.

People forget, they had Apidra, which competes against Lilly and Novo Nordisk, and they didn't succeed with that, either. I wasn't here, but what makes you think they're going to succeed with another mealtime insulin when they couldn't do one on their own?

Speights: Is finding another partner even on the radar screen at all now?

Castagna: I have expressed publicly that we're open to a co-promote partner. To me, this is our lead asset. I was actually a shareholder of MannKind when they got [Afrezza] approved. When they gave it to Sanofi, I sold my shares. And not because I didn't love the company, but to me the entire value of the company was Afrezza. So there were no other pipeline compounds close enough that would continue to drive value.

Now, I think we can grow a lot faster, and there's a lot more people that we can help, because we're not going to target 50,000 primary-care physicians. But there are a lot of patients, and that's where a lot of them sit -- in the type 2 market. So as we continue to expand and fix coverage, and the package is now fixed, we're open to a co-promote partner, which means you would take another large company's 300 to 500 reps, and you would drop this in their bag as a secondary position. And now we can train them and do a lot better.

Speights: Do you think that continued success of Afrezza on your own could draw the attention of larger partners?

Castagna: Yeah, I think we've already demonstrated that we've surpassed Sanofi's sales curves. And we've done that on one-seventh of the resources. I think our success is already there. We've already beat them. So just think if we had the money Sanofi has, we'd be blowing it out of the park right now. And we don't. We've run the company very resource constrained for the last year. But I think the reality is that if we had more reps or more money, we'd be growing even faster.

Speights: You've mentioned before about the recent label change for Afrezza being a pivotal moment for the company. When do you think we'll really start to see the impact of that label change on Afrezza sales?

Castagna: In general, changes take two to six months, depending on what type of change you're making, to show impact. For example, with a new rep in a new territory, you typically don't see impact until the first four to six months. The first three to four months they're learning to meet the customers. Some reps are faster. I hate to say averages, but in general it takes about two months to start to see impact of a sales force, of what they're doing. Now, we turned on TV, so that might accelerate some demand in local markets.

Speights: You mentioned the TV spots. How do you respond to people who say, "Hey, why is MannKind spending money on TV commercials?" Is that a better approach than hiring more sales reps to target more physicians?

Castagna: Well, the fastest way you can scale up is TV. We've grown the sales force for a little over a year now. If I wanted to scale up the sales force, it would take about three to four months to remap the territories, hire the people, get them trained, and get them out there. So you can see a four-month lag, a three-month lag, from just the decision to the hiring to the implementation, and then another two months in terms of impact starting to happen. So we sat there and looked and said, "It doesn't make sense for us to wait for three, four, five, or six months. When you brought this cash in, you should be putting it to use." We know the drug is very promotion responsive. We know consumers aren't aware of it. They want to be aware of it, and they want to take the drug.

Speights: How long do you think it will take for you to know if the TV campaign is really working effectively?

Castagna: I think in terms of turning into prescriptions, it will take about two months to start to see a meaningful lift. We'll measure every week, but in general, you think about a patient has a visit six to eight weeks out, maybe 12 weeks out, so you've got to see the TV [commercial] probably three to five times, and then they're reminded for the next doctor's appointment. We can tell you in the first week of the TV ad, Google search AdWords are up, website hits are up fourfold, copay downloads are up. So we can tell you all the early metrics that would indicate it's working are up, but the real metric to me is going to be prescriptions and people taking the drug. And that will just take some time, but the early metrics are positive so far.

Speights: You announced the upcoming stockholder meeting on authorizing around 140 million new shares. Why that number? Do you anticipate any pushback or difficulty getting the authorization approved?

Castagna: The purpose of the 140 million --- there is no right or wrong number. You could have went for 20 million. you could have went for 200 million. There are 140 million outstanding shares now, so we're just increasing that count to 280 million. The reality is that if you want to make an acquisition, you have to have shares. If you want to continue to expand the company, you might need shares available to do things. To do partnerships, you could need shares, to bring in an ownership in the company.

So we only have 4 million shares left. That's not in the interest of shareholders to run a company and have zero options on the table if things pop up over the next two to three years. So what I didn't want to do, honestly, is say I want 20 million shares and everybody says, "Oh, we have 10% dilution coming." You needed to have a number that was reasonable but not too absurd. I think that's what's important.

We think we're doing the prudent thing by asking for more than we need. Over the next three to five years, we should put those shares to good use. When you think about 140 million, we don't need all those shares tomorrow. That's a misperception a lot of people have.

Speights: The Motley Fool is a site geared toward investors. What would you say to either existing shareholders who have held on to MannKind stock for quite a long time or to new investors who are taking a look at MannKind? Why should they keep their MannKind stock or invest in MannKind?

Castagna: Well, first, I've been a fan of The Motley Fool since 1997. I started trading a lot of stocks back then. Nice work, is what, in general, I want to say to you guys.

Look, the company has been through the worst. They've spent $2.9 billion, founded by a billionaire, to get to this point. We've brought in a new management team and an entire commercial organization to make this a very successful company. We're fixing really nine years of financing and commercial decisions that were made in terms of clinical development. You can't just unwind all those activities in six months, even in a year. So we've been fixing. We've done a lot in a year and a half. I think it's going to be another quarter or two, and people are going to see that we've really made a lot of progress. And they're going to see that in the financial results and see that in the volume growth of the product.

I think it's a good value today. If I could buy more, I would. I just think, looking for a publicly traded biotech who's got a phase 3 asset, full label approval, worldwide rights, and an integrated manufacturing plant for a $350 million market cap, go find me one -- with a drug like this for as big a need as this. If it was a bad drug, I would be worried. I wouldn't even be here. This is a fantastic drug. We've got the wind at our back, and the sails moving in the right direction. We're not at full speed right now, but the wind's turning, the tide's turning. Everything's going in the right direction right now.

With the financing we got, it gave us extra breathing room to turn on TV and make some bigger decisions as we go forward. But at this point, it's purely an investment of scale-up discussion. This isn't about will the drug succeed or not, will the company be in bankruptcy or not. I don't see those things happening at this point. The drug will succeed. The company is not heading for bankruptcy. So it's really a matter of are we going to be $50 million, $100 million, or $500 million. And I think those trends over the next six months will really start to show people what can happen.