Across Wall Street, securities-based lending is red hot. Nearly nine years into a bull market, banks are encouraging customers to borrow against their stock and bond portfolios to paper over budget gaps and cash needs, rather than sell their investments.

It's a boon for Wall Street's giants. Morgan Stanley (NYSE:MS) clients have borrowed more than $40 billion against their portfolios. Bank of America (NYSE:BAC) has $39.3 billion of these loans outstanding. And even online discount brokers, Interactive Brokers (NASDAQ:IBKR) chief among them, are pitching the ability to borrow against a portfolio at low interest rates. 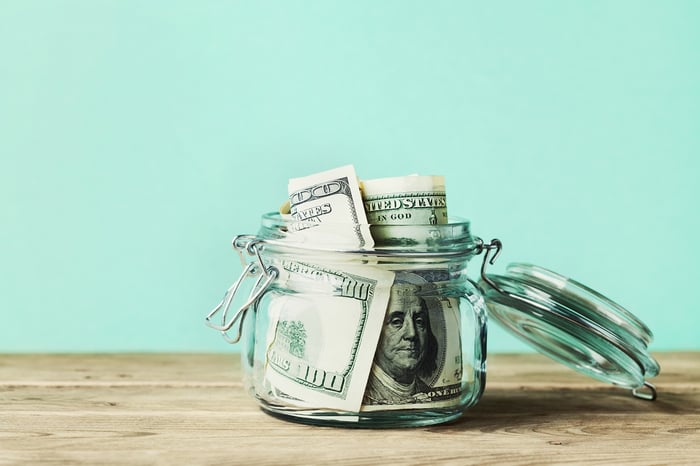 Securities-based loans allow you to use your stocks as collateral for a low-interest loan. Image source: Getty Images.

Borrowing against a stock portfolio is nothing new. Margin loans have been around for a long time. But securities-based loans offered by Morgan Stanley, Bank of America, and other large wealth managers aren't margin loans. The proceeds aren't supposed to be used to buy more investments. Marketing materials commonly suggest using a securities-based loan to buy a vacation home, or cover retirement expenses, without needing to sell your investments.

How much one can borrow depends on the quality and safety of the collateral. Stock holdings might get an advance rate of 50%, whereas U.S. Treasury bills might have an advance rate of 95%. Thus, wealth-management clients can borrow $0.50 for every $1 of stock they own or $0.95 for every $1 of U.S. Treasury bills in their portfolios. Loans can extend to five years or more, though most are slated to mature within a year, at which point they will have to be paid off or rolled over. Image source: author, with data from the SEC.

Underwriting based on the collateral value makes getting a securities-based loan easier than getting another large loan, like a mortgage. You can forget finding old tax returns or W-2s. The value of your investment portfolio is what matters most. If you can't repay, lenders can sell your investments to recoup what they have loaned out.

The loans are profitable for the banks that underwrite them because losses are few and far between, particularly when asset prices are rising. As a result, Morgan Stanley can charge as little as a 3% spread on top of one-month LIBOR for a client who borrows $1 million. Currently, a borrower would pay about 4.24% in all for such a loan, based on a marketing pamphlet. Those who borrow more than $10 million would get a rate closer to 3.5%, substantially lower than other forms of short-term lending. Bank of America uses a similar tiered pricing schedule.

For wealth managers, interest is only part of the allure. By encouraging their clients to borrow against their holdings, rather than sell them, brokers also retain valuable assets under management. Tally it up, and banks can earn 3% on the loan balance, plus 0.5% to 1% on the assets kept under their management. It is in brokers' best interest to encourage their clients to borrow against their assets, rather than cash them in, as loan balances and assets under management are key variables in bonus compensation.

Who is using these loans?

There are reasons to borrow against a portfolio rather than sell investments to meet cash needs. Clients typically borrow against investments in taxable accounts. Paying a small amount of interest is better than selling a winning investment and paying capital gains taxes, particularly for long-term holdings with a small cost basis.

Tax rules generally make it cost prohibitive to use securities-based loans to borrow against an individual retirement account (IRA), thus making these loans product for the ultra-wealthy who have taxable assets. The average Joe, who is more likely to have substantial balances in tax-deferred retirement accounts, but few taxable assets, isn't primed for a lending pitch.

But make no mistake: These loans aren't restricted to the super-wealthy. Even retail brokers and robo-advisors are getting in on the action by crafting their own products to mimic securities-based loans offered by the largest wealth-management companies.

Robo-advisor Wealthfront rolled out a "portfolio line of credit" that enables clients with at least $100,000 in their taxable accounts to borrow up to 30% of their balances. Interactive Brokers' new debit card lists its low-margin rates as a key feature. "Borrow against your account at 1.41% to 2.66% APR, lower rates than credit cards, personal loans, and home equity lines of credit," reads the first bullet point in its debit card pitch. Margin loans are a big business for Interactive Brokers, which now has 38% share of margin loan balances at the four largest online discount brokers, up from just 11% at the end of 2008.

A disaster waiting to happen?

Critics say that securities-based lending increases stock market risks. After all, a bear market might force some clients to liquidate their investments to repay their borrowings, causing a chain reaction of forced selling that drives stock prices lower. The S&P 500 declined 56.4% from peak to trough during the financial crisis, yet some brokers offer loans equal to 50% to 65% of a clients' stock portfolio. If a similar decline were to happen, those who borrowed the maximum at the peak would have to sell their stock near the bottom to repay what they owed.

Proponents say that securities-based lending is responsible, even safe, as investors can only borrow against their most-liquid investments, and can be asked to contribute more equity if stock prices fall. Besides, securities-based loan balances are a mere fraction of total stock market wealth. Morgan Stanley's fast-growing loan portfolio might have $40 billion of balances, but it's small potatoes compared to total client assets of $2.3 trillion, one might argue.

How securities-based loans affect the market on a macro level is difficult to understand and quantify, but for the individual, it's undeniable that securities-based lending increases the risk of loss. Borrowing against your investments remains the only way to lose your original investment, and more, should stock prices decline.