Two decades ago, major automakers such as Ford Motor Company (NYSE:F) and General Motors (NYSE:GM) clearly couldn't see the forest for the trees. Their vision was so nearsighted that all the automakers wanted to do was churn out as many SUVs and trucks as possible while fuel-efficient vehicles, which would soon become in high-demand, were left for dead. We know how poorly that ended during the great recession, when expensive, gas-guzzling SUV demand plummeted, and it has caused many investors to avoid owning shares of major automakers since.

Fast-forward to today, and the long-term future is clear as day for automakers: electric vehicles. And while the strategies are long term, recent moves from Volkswagen Group (OTC:VWAGY), Ford and GM, at least encourage investors they're on the right path.

Let's not shy away from the fact that automakers are in the business to make money, even if it will take time for EVs to bear significant fruit on the bottom line. But judging by automakers' forecast, the sales and production ramp-up could happen sooner than many expect. Ford expects China's EV market to grow to 6 million units per year by 2025, with four million of those units being all-electric. According to the China Association of Automobile Manufacturers, deliveries of such vehicles jumped 53% to more than 500,000 units last year alone. 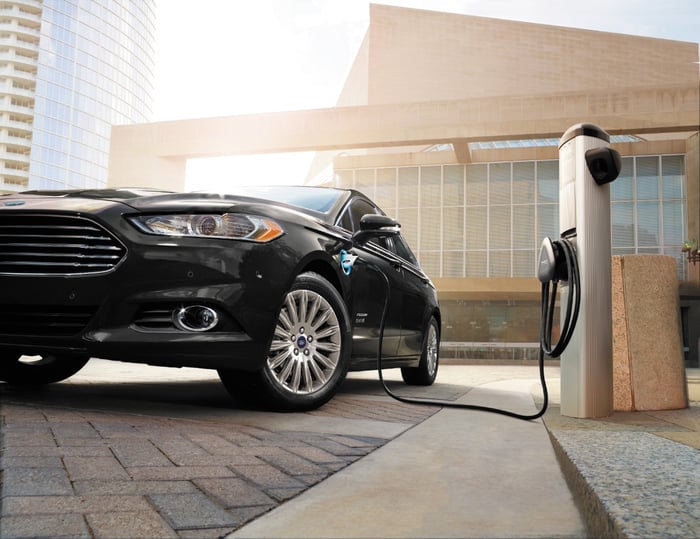 Currently, Ford plans to begin satisfying this demand through exports to China as well as partnering up -- remember foreign automakers must create a joint venture to sell vehicles in China or face steep tariffs to export vehicles into the country. A major Ford executive in Asia, Peter Fleet, acknowledged that Ford plans to export almost $10 billion in exports from the U.S. to China over the next three years alone. But the Dearborn-based automaker also inked a deal with China's Anhui Zotye Automobile Co. to manufacture a full line of EVs with an initial investment of $756 million. In fact, by 2025, Ford expects at least 70% of its Ford branded vehicles to be offered in China with electric or hybrid propulsion.

Everyone wants a piece of the pie

As China's government continues to push zero-emissions vehicles to clean up the country's pollution problem, other automakers are seeing the long-term opportunity in EVs as well. Just this week, Volkswagen announced its plans to spend $11.8 billion by 2025 to develop and produce electrified vehicles. More specifically, it intends to launch 15 of the so-called new energy vehicles (NEV) over the next two to three years, with another large chunk of 25 NEVs to come after 2025, according to Reuters. Detroit's largest automaker, General Motors, also gave investors a glimpse into its plans this week. And, similar to Volkswagen and Ford, the strategy had a strong Chinese flavor driving its global forecast.

Looking at the graph above, GM plans to reach 1 million EV sales annually by 2026 through the debut of at least 20 new all-electric and hydrogen fuel cell vehicles globally by 2023. But the question investors really want to know the answer to is: When will this move the needle on profits? Fortunately, GM gave a little more insight to that very question this week.

Mary Bara, GM's CEO, says the days of burning money on all-electric vehicles such as the Chevrolet Bolt should come to an end with the launch of the automaker's next-generation EV platform in 2021. GM believes its next-generation platform will be able to drive total per-unit cost down by 30% -- or perhaps even more.

Speaking at the Barclays 2017 Global Automotive Conference, Bara also commented "Make no mistake, we are here to win." But so are many other global automakers, and that's exciting for investors because no longer are the automakers missing the forest for the trees.