Please ensure Javascript is enabled for purposes of website accessibility
Log In Help Join The Motley Fool
Free Article Join Over 1 Million Premium Members And Get More In-Depth Stock Guidance and Research
By Leo Sun - Nov 21, 2017 at 8:29AM

Which tobacco giant will light your portfolio?

Tobacco stocks have been solid dividend plays for long-term investors. Smoking rates have dropped in many parts of the world, but tobacco companies have  offsett those declines with higher prices, cost-cutting measures, and diversification into new markets like e-cigarettes. Those moves have protected their bottom lines and enabled them to keep paying out generous dividends.

Today, we'll compare two well-known tobacco giants: Altria (MO -1.34%), the biggest tobacco company in America, and British American Tobacco (BTI 0.48%), a U.K.-based multinational company that recently took full ownership of the No.2 player in the U.S. tobacco market. British American Tobacco handily outperformed Altria over the past 12 months, with its 23% rally crushing Altria's 6% gain, but will that trend continue through the end of the year and beyond? 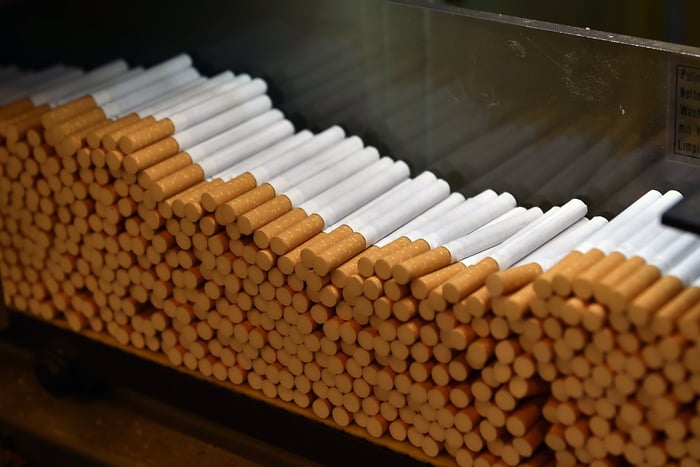 How are Altria and British American Tobacco different?

But in 2008, Altria spun off its overseas operations as Philip Morris International (PM -3.14%). In recent years, Altria expanded its portfolio of "smokeless" products and traded its former stake in brewery SABMiller for a position in its beer-brewing peer and acquirer, Anheuser-Busch InBev.

That purchase fueled speculation that Philip Morris would need to recombine with Altria to stay competitive. Neither company has made any overtures in that direction yet, but the two companies previously deepened their research and development and distribution partnerships for e-cigarettes and newer products like PMI's iQOS, which heats (instead of burning) tobacco "sticks."

Those who follow Altria have modest expectations for its future revenue and earnings growth, seeing rises of 1% and 9% respectively this year. Altria's revenue usually grows at a slower clip than its earnings, which are lifted by buybacks, price hikes, and cost-cutting measures. A key advantage that Altria has against British American and Philip Morris is that it's well insulated from currency headwinds, so fluctuations in the dollar don't impact its overall growth.

Altria finished the first nine months of 2017 with a 50.8% share of the domestic cigarette market. That marked a slight decline from its 51.1% share a year earlier, and its total cigarette shipments fell 4%. This indicates that Altria could be hurt by British American Tobacco backing Reynolds American in the U.S. market.

During Reynolds' last quarter as a public company, it reported a market share of 34.5%. Its "premium drive brands" (Newport, Camel, and Natural American Spirit) gained 0.3 percentage points year over year to claim 24.6% of the U.S. market. 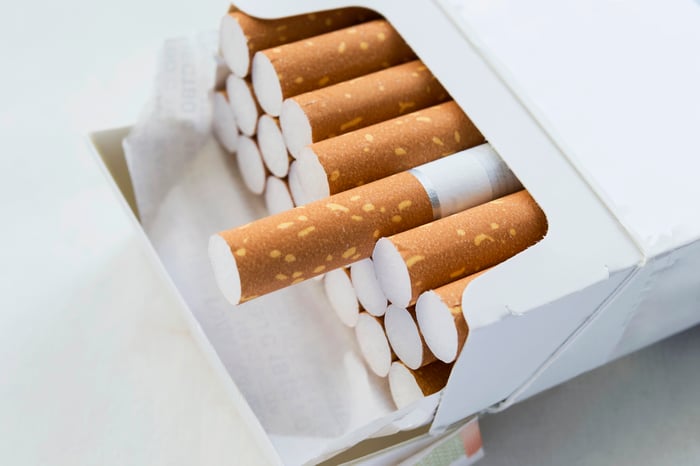 British American is expected to see revenue and earnings rise 39% and 13% respectively this year. Those big gains are mostly attributed to its acquisition of Reynolds and the softness of the British pound against other global currencies.

In the first half of 2017, British American's total tobacco shipment volumes fell 5% year over year. But price hikes lifted its revenue by 2.5% on a constant currency basis, and it reported market share gains in Turkey, Pakistan, Poland, Italy, Chile, Canada, Russia, and even Australia -- which has the highest cigarette prices in the world.

Looking ahead, both companies should be wary of the Food and Drug Administration's current moves against the tobacco industry -- which include tighter regulations of nicotine levels and a potentially tougher approval process for e-cigarettes and other "alternative" smoking products like iQOS. Those moves could hurt Altria's entire business while throttling British American's growth in the U.S.

Altria currently pays a forward dividend yield of 4.1%, which is supported by a payout ratio of 31%. That ratio is usually much higher, but was greatly reduced by the $13.7 billion pretax earnings boost it received from the SABMiller deal. Altria has hiked that quarterly dividend every year since the PMI spinoff.

British American pays a forward yield of 3.4%, and it pays out 75% of its earnings as dividends. However, BAT hasn't consistently raised its dividend, which is paid biannually -- typically with a larger payment in the first half and a lower one in the second. But starting next year, British American will switch to quarterly dividends.

Altria trades at just eight times trailing earnings, compared to a multiple of 22 for British American, compared to the industry average of 13 for tobacco companies. But Altria's P/E was distorted by the SABMiller deal, and its forward P/E of 16 is actually very slightly higher than British American's.

Altria is still a decent investment, but British American simply offers better growth opportunities across more markets, its earnings will be buoyed by a weaker pound for the foreseeable future, and it trades at a lower forward valuation. Therefore, I think it still makes more sense to buy British American, even after its year-long rally.