If you're not technologically inclined, owning bitcoin is an expensive proposition.

Bitcoin Investment Trust (OTC:GBTC), a popular fund for retail investors, carries a management fee of 2% of assets on an annual basis. Those who have large sums can pay lower wholesale prices for bitcoin storage and custody. A new solution from Coinbase costs 1.2% of the bitcoin's value each year, in addition to an up-front fee of $100,000. The service is designed for institutional investors who own more than $10 million of the digital currency.

When you consider that bitcoin doesn't take up any physical space -- it exists only in digital form -- the high cost of custody and storage is mind-blowing. Based on regulatory filings, SPDR Gold Trust (NYSEMKT:GLD) historically paid about 0.08% of the value of its gold for storage and custody services on behalf of its shareholders, or approximately $1.04 per ounce, per year. In contrast, Coinbase's custody solution costs 15 times more.

Investors don't seem bothered by the high price of having bitcoin in someone else's custody. Shares of Bitcoin Investment Trust closed on Friday at $906 per share. Each share had a then-current asset value of $720.85 each. In other words, investors were willing to pay a 26% premium over bitcoin's actual market value, and 2% a year thereafter, for a convenient way to own the digital currency. 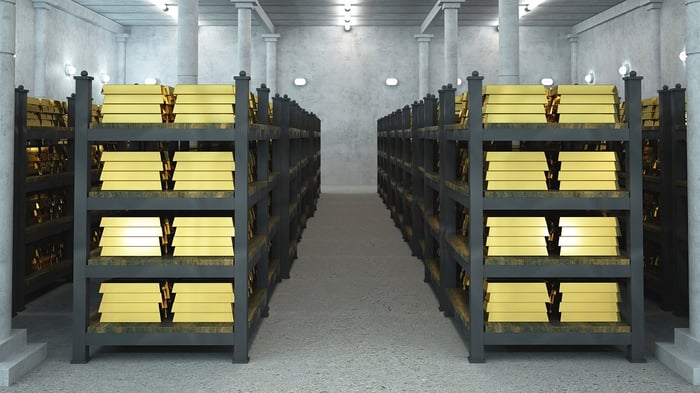 Why investors will pay high prices for safe storage

If you want to invest in gold, you could buy and store your own gold bars in your home. But it often makes more sense to buy shares of SPDR Gold Trust, even if it means you lose 0.4% of your gold to all-in expenses each year.

Collectively, SPDR Gold Trust owners pay about $137 million each year to hold their gold in a convenient form, based on last quarter's total fund expenses. On a percentage basis, however, it's a trivial price to pay to know your gold is held in a highly secure vault that is audited with regularity. The gold sits in an underground HSBC vault reportedly located somewhere in London.

On an institutional level, securities laws and compliance rules often require assets to be held in custody and audited by a third party. For this reason, institutions that want to own an asset -- whether it's gold, bitcoin, or stocks -- have to use a custodian to manage the paper trail.

Custody is a big business few know about. Bank of New York Mellon (NYSE:BK) is by far the market leader, as it provided custody services for more than $30 trillion of investments held by financial companies and funds alike at the end of the most recent quarter.

Beyond a paper trail, custody and storage services provide valuable protection against fraud and theft. Bitfinex, a bitcoin exchange, lost 119,756 bitcoin owned by its clients in 2016, then valued at about $72 million. Those bitcoin are now worth nearly $1 billion, based on current market prices. Anyone who held bitcoin through its exchange was left holding the bag for the losses, which were evenly distributed across client accounts.

Paying 1.2% per year for security is money well spent if the alternative is losing far more to theft. Viewed cynically, custodian fees are in many ways a "scapegoat tax." If something goes wrong, an institutional investor would prefer to pass the blame to a professional custody service than an internal employee who controls the keys.

It's a seller's market, for now

Prices for any good or service are set based on what the market will pay. Bitcoin is up more than 7,280% year to date, making single-digit custody, storage, or management fees a mere rounding error on an asset that has exploded in value in parabolic fashion.

The gold rush in custody is unlikely to persist forever. As bitcoin's expected returns decline, and competition emerges, Coinbase Custody and Grayscale Investments' Bitcoin Investment Trust will find it difficult to charge fees of 1.2% and 2% per year, respectively, on assets held on behalf of others.

The opportunity cost of holding "negative carry" assets like bitcoin or gold also increases as interest rates rise. Lending money to the U.S. Treasury for one year provides a risk-free return of 1.6%, which is a real, but often forgotten cost, of holding an asset that doesn't generate regular income. Add the opportunity cost to the 1.2% cost of Coinbase Custody and bitcoin's negative carry cost comes to about 2.8% per year, pre-tax.

If gold can be stored in Fort Knox-like bunkers for just 0.08% per year, there is little reason it should cost 15 times more for bitcoin to be stored in similarly safe solutions. For now, though, it's easy money for the custodians, who are busy selling services to investors who are too busy dreaming of 10,000% gains to worry about the relatively high cost of securing their digital wealth.