CEO Mary Barra said GM's upcoming electric vehicles are being designed with an emphasis on profitability, something that has eluded Tesla so far.

The new platform will underpin a series of vehicles that GM will begin introducing in 2021, she said.

The news wasn't entirely a surprise. GM confirmed last month that it plans to launch at least 20 new all-electric vehicles by 2023. But Barra's presentation, to a group of Wall Street analysts at a conference hosted by Barclays, shared much more detail on those plans.

Here's what we learned, and why it's important to GM investors. Profitability will be designed into GM's new electrics

Beyond the product details, the big takeaway was that GM is taking steps to ensure that its new electric vehicles (EVs) are solidly profitable. Barra said that the new EV platform will reduce GM's costs in part because of the way it's designed, and in part because of what it will allow GM to do:

One of the things we'll be doing is structurally integrating the batteries into the architecture. This will allow us to take out cost and gives us better flexibility from a design perspective. We will have modular [battery] cell chemistry solutions that will allow us to enter multiple segments off of this platform and really support all of the customer demands.

We'll also have the ability, which we have today, to manufacture battery packs at scale, both in China and the United States. So the result is a very modular battery platform that's going to give us tremendous flexibility to meet customer demands and to lower cost.

Let's translate that. First, a "platform" is a set of common parts and measurements that can be shared among different models. These commonalities will allow for greater economies of scale in production -- both in China and the U.S., the world's two largest new-car markets -- and allow the various models built around platform, which may appear very different from one another on the surface, to be built on shared assembly lines.

As Barra said, this new platform is modular. That means it can be used for many different types of vehicles, including sedans and SUVs of various sizes. That modularity gives GM a head start on developing lots of different electric vehicles that may look quite different and serve different kinds of customers, but that will use shared parts, engineering, manufacturing equipment, and battery types. This spreads the fixed costs of developing and manufacturing those parts across a larger number of vehicles.

In addition, that modularity will allow GM's factories to rapidly change the mix of electric vehicles they're building to keep in step with shifts in demand in what is expected to be a rapidly expanding market.

Long story short: The fact that this new platform will serve as the basis for many different types of vehicles will reduce GM's cost per vehicle significantly.

That's one of the factors that will make GM's upcoming electric vehicles solidly profitable. The other? Falling battery costs.

Reducing costs of both cells and packs

Barra said that GM expects its battery cell cost to fall from $145 per kilowatt-hour (kWh) today in the Chevy Bolt, to less than $100 per kWh with the new platform.

Those batteries may come from more than one supplier: Korean giant LG Chem (NASDAQOTH: LGCLF), the supplier of the Bolt's batteries, is a strategic partner of GM, but the automaker is working with other battery-cell makers as well. 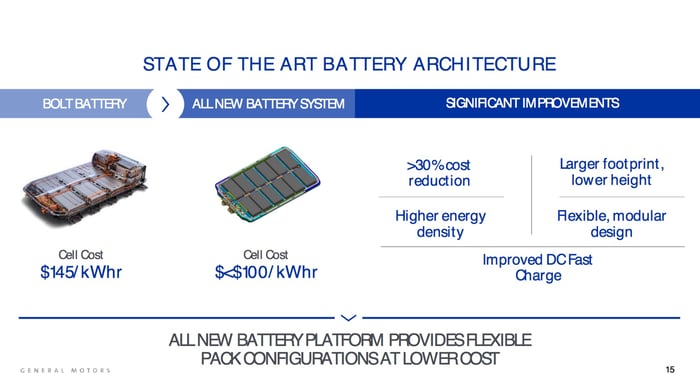 What does that mean? When analysts talk about the costs of batteries for electric vehicles, they talk in terms of two different numbers: Cell cost, which is the cost of the lithium-ion battery cells themselves, usually expressed in terms of cost per kilowatt-hour (kWh); and pack cost -- the cost of an assembled vehicle battery pack, which might contain thousands of individual cells).

Of the two, cell cost is the more useful number for comparison, as most of the major automakers buy cells from battery makers and assemble their own battery packs. (Tesla (TSLA 4.88%) is the exception: It makes cells and assembles battery packs in its Nevada Gigafactory. But even there, it appears that partner Panasonic is in charge of manufacturing the cells. It's just done on site.)

GM is also working to lower its pack costs. Barra didn't give specifics, but she said that company is improving the design of its battery packs, making them lower in height (and therefore easier to mount in a vehicle's floor) and modular, so that small and large battery packs can be assembled from common components.

The takeaway: GM is putting profitability first with its electric cars

The upshot? This isn't lip service for investors. GM is putting a lot of effort and money work into developing a lineup of appealing electric vehicles, and the  supply chains and infrastructure it will require to mass-produce them profitably.

My take is that GM's plans are aggressive but realistic. Everything that Barra talked about is going to happen, and is in the process of happening now. Taken as a whole, it is evidence that GM is likely to not just survive, but thrive as technology transforms the traditional auto business.