If an investor assumes that all dollar store operations are alike, and that it's best to avoid them due to pressure on the industry from the likes of deep discounter Wal-Mart Stores and online juggernaut Amazon.com, some compelling investment opportunities might get overlooked. Dollar Tree, Inc.'s (NASDAQ:DLTR) business model, which splits revenue between fixed price points ($1.00, of course!) and variable prices by maintaining two major brand concepts, is thriving.

Released last week, the company's third-quarter 2017 earnings illustrate some of this momentum. Revenue rose 6.3% due to a comparable-store sales increase of 3.2%, as well as the addition of 163 net new stores over a base of approximately 14,600 units.

Gross margin improved nearly 100 basis points during the quarter to 31.3%, resulting in gross profit of $1.67 billion. Dollar Tree attributed the rise to lower markdown expense and merchandise costs, and lower occupancy costs as a percentage of sales.

Revenue, comparable sales (or comps), and gross margin rising in tandem are naturally welcomed by shareholders. Yet I want to point out something slightly curious, in that this trend has held the entire year. Below is a table showing the increases in Dollar Tree's top line, comps, and gross margin, both for the current quarter and the first nine months of the year:

What's surprising about this picture? Given higher revenue and comps, you'd anticipate a gross margin decline. In a competitive environment, dollar retailers traditionally incentivize the traffic necessary for higher sales through discounts and promotional activity.

Take competitor Dollar General (NYSE:DG), which will report third-quarter earnings in December. Though based on just two quarters of data, Dollar General has also boosted revenue so far in 2017, notching a top-line increase of 7.3%. Comps have improved 1.7%, and yet gross margin has declined by roughly one-half of 1 percent. Dollar General's management attributed the slight margin dip in part to higher markdowns from promotions and inventory clearance activities. 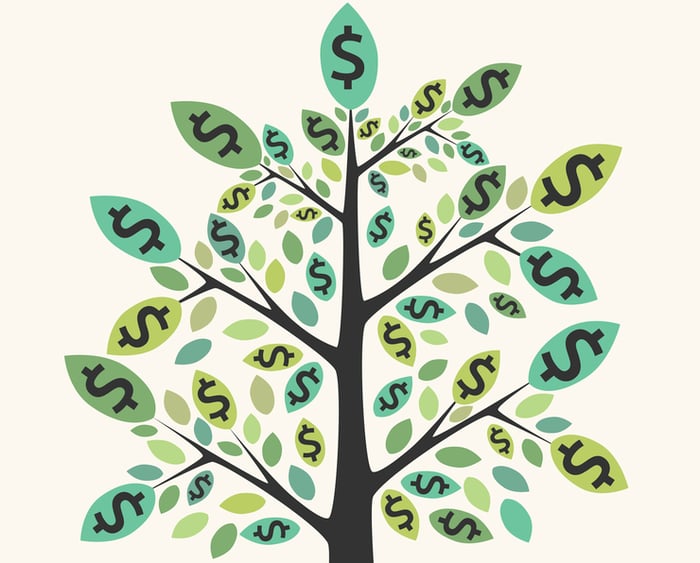 Dollar Tree will likely end the year showing a positive trend in the categories above because its Family Dollar business, acquired in July 2015 for $10 billion, is complementing its legacy brand (much as management predicted when the merger was completed).

This division of brands gives the organization much flexibility, as the two segments have very distinct value propositions. For the most part, Dollar Tree has remained a true dollar store, with most items selling for $1.00. The Dollar Tree concept is targeted toward middle income consumers, and locations are generally found in strip malls anchored by big-box stores.

Conversely, Family Dollar seeks to be a regular neighborhood haunt for lower-income consumers with free-standing stores often found in rural areas. The concept offers a price point range from approximately $1.00 to $10.00, with a higher emphasis on everyday consumables inventory.

Dollar Tree has updated and enhanced the Family Dollar banner by renovating acquired stores. It's targeting 350 store upgrades in fiscal 2017 alone, with several hundred more planned in the coming years.

Between the two brands, the company has gained a market edge. Putting the right product in front of potential consumers based on an area's economics and demographics gives Dollar Tree a flexibility that its competitors, which either employ fixed price or variable models (but not both), don't possess.

Furthermore, zeroing in on customer habits helps the organization avoid more promotional activity than is needed. Management argues that knowledge of Family Dollar customers and their spending patterns is helping to drive the division's profitability, which is outpacing Dollar Tree's this year. In the third quarter, Family Dollar's gross profit increased almost 2 percentage points -- an extremely rare occurrence in the dollar-store industry, which routinely trades profits for sales.

Actual, and not hypothetical merger benefits

Companies often talk up strategic and monetary synergies to investors before they merge. In Dollar Tree's case, the synergies have really materialized. Family Dollar's focus on lower-income customers has translated into less cannibalization where stores are in proximity to Dollar Tree units. And management confirms that the company is on track to realize $300 million in annual merger cost synergies by 2018.

The complementary business styles have helped Dollar Tree weather much competition, and lend credence to the words of CEO Gary Philbin, as stated in the Q3 earnings call: "[B]oth Dollar Tree and Family Dollar, we are a company that's going to grow hundreds of stores each year -- when other retailers are potentially pulling back."