Some businesses go through cyclical booms during which they can experience monumental gains in their stock price. Thor Industries (NYSE:THO) has enjoyed such a period for more than a year now, as the recreational vehicle market took off in 2016 and has continued to see impressive performance. With rising demand among a new generation of RV enthusiasts, Thor intends to make the most of the upsurge in vehicle purchases.

Coming into Monday's fiscal first-quarter financial report, Thor investors fully expected the company to keep benefiting from the increased interest in RVs. Yet even optimistic shareholders were surprised by just how well Thor did. Let's look more closely at Thor Industries to see what its latest results say about its prospects. 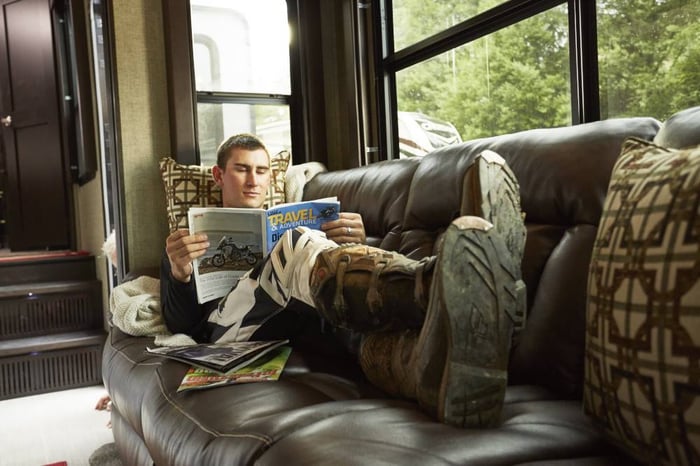 Thor Industries' fiscal first-quarter results started fiscal 2018 on a strong note. Sales jumped more than 30% to $2.23 billion, which handily exceeded the $1.95 billion consensus forecast that most of those following the stock had expected. Net income of $128.4 million was up an even more impressive 63% from year-ago levels, and that worked out to earnings of $2.43 per share, comparing favorably to the $1.84 per share that most investors were looking to see.

The most impressive thing about Thor's quarter was that it managed to sustain such strong growth rates even though the company finally lapped the acquisition of its Jayco RV unit. Investors had expected revenue growth in particular to slow much more dramatically, but Thor continued to find ways to squeeze more sales from both its legacy business and Jayco. Both revenue and net income figures were new records for the company.

Trends that investors have seen within Thor's divisions generally continued. Towable RVs remained the faster-growing part of the company's business, with sales gains of more than a third driven largely by demand for affordably priced travel trailers. Unit sales were up 29%, with a nearly 4-to-1 split between travel trailers and fifth wheel units. Pretax income for the towable segment jumped almost 70% from year-earlier levels, and backlog for the unit was up 75% to $2.46 billion.

On the motorized RV side of the business, sales gains were smaller but still solid, climbing by 23%. Segment pretax income was up 30%, with solid demand for moderately priced gas-powered Class A and C motorhomes. Unit sales were up 26%, with a more than 40% rise in Class C RVs sold. Backlog for the segment jumped almost 60% to $1.12 billion as demand remained strong throughout the period.

CEO Bob Martin celebrated the news. "Thor has begun fiscal 2018 with another quarter of exception growth at both the top line and bottom line," Martin said, and "industry demand remains exceedingly strong." He also pointed to efficiency gains related to the Jayco acquisition and integration that have paid off for Thor more quickly than some had anticipated.

What's down the road for Thor?

Thor has reason to believe that good times will continue. Martin pointed to Thor's open house event in September, at which dealers were enthusiastic about product offerings and expressed confidence in the industry's ongoing growth into 2018.

The RV specialist is also setting itself up for future success. The company paid down its debt facility by $55 million during the quarter, slashing its outstanding balance by more than a third. With strength in the balance sheet being a priority for Thor, the RV manufacturer thinks that it should be able to pay down the entire balance of its debt by the end of fiscal 2018.

At the same time, Thor isn't afraid to spend to boost its prospects. The company has a much higher capital expenditure budget in fiscal 2018, with planned new production facilities at several locations in its home state of Indiana to support the Cruiser and Jay Flight brands of travel trailers. These strategic moves line up with Thor's assessment of the rapidly expanding market for RVs, and it wants to take maximum advantage of good conditions while they last.

Thor investors celebrated the report, and the stock was up more than 10% in premarket trading Tuesday morning following the announcement. With so many reasons for optimism, shareholders believe that Thor can continue to claim its share of a growing market and prosper for years to come.