Shares of barcode scanner and RFID specialist Zebra Technologies (NASDAQ:ZBRA) are on fire. Zebra is on a mission to remake itself as a leading force in "Internet of Things" technology. With investors hungry for ways to play the IoT phenomenon, Zebra Technologies stock has surged 38% over the past 52 weeks, growing more than twice as fast as the rest of the S&P 500.

And one analyst thinks Zebra stock is only just beginning to gallop. Here are three things you need to know. 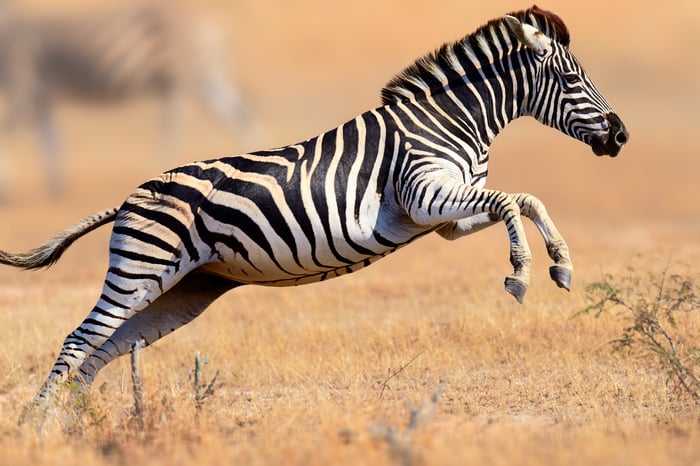 Early this morning, analysts at Imperial Capital announced they are upgrading shares of Zebra Technologies stock to outperform and assigning a new $120 price target that implies a further 10% upside to the stock. As Imperial explains, Zebra is working hard to pay back the $3.25 billion it borrowed to finance its $3.45 billion acquisition of Motorola Solutions' enterprise business in 2014.

Already, Zebra's debt levels are down to $2.3 billion net of cash on hand, helping Zebra to reduce its interest costs. Operating profit margins are climbing. The 9.6% margin earned over the past 12 months is nearly twice the margin Zebra earned in 2015, even if it's still only about half the company's recent high-water mark on margins (18.7% earned in 2011).

What's more, Imperial believes that Zebra is on track to "achieve its 2-year goal for $650 million in debt paydown." If correct, that should cut Zebra's annual interest expense ($175 million over the past 12 months) by more than 25%, dropping those profits to the bottom line more or less intact.

Most analysts seem to agree with this assessment. According to data from S&P Global Market Intelligence, the consensus among Wall Street bankers is that Zebra -- only barely GAAP-profitable today -- will book its first full-year profit in three years this year, earning about $1.33 per share. Analyst estimates call for this profit to roughly quadruple to more than five dollars per share in 2018, then grow a further 23% in 2019 -- to $6.25 per share.

That's as far out as detailed analyst estimates go right now, but I have to admit that the limited view we've got so far looks pretty good -- a nearly fivefold increase in profits over the next two years. But is even that good enough to justify Zebra's stock price?

It's important at this point that investors don't get carried away by the rapid short-term growth rate. Even assuming analysts nail their earnings projections for Zebra, at $6.25 per share, Imperial Capital's $120 price target implies a very forward P/E ratio of 19.2 for Zebra stock at the end of 2019 -- a date more than two years in the future.

What's more, the farther out you look, the grayer the picture gets for Zebra Technologies. According to S&P Global estimates, analysts' projections for Zebra Technologies' long-term, five-year average growth rate are just 10% -- implying a marked slowdown in earnings growth after the initial strong start over the next two years.

Suffice it to say that 10% is not a lot of growth to support a valuation of more than 19 times 2019 earnings for Zebra stock.

So what does all this mean for investors? Zebra's doing a lot of things right today. As TheFly.com notes, Imperial Capital calls it "a key applied technology infrastructure company." TheFly says Imperial Capital "views the company as one of the purest plays on applied technology in Internet of Things." From a financial perspective, Zebra's progress in paying down its Motorola-originated debt is encouraging, and likely to boost earnings significantly as the debt goes away.

All that being said, however, Zebra stock today sells for more than 190 times trailing earnings, and nearly 22 times trailing free cash flow -- unadjusted for debt. Investors who buy Zebra at today's high prices -- or in reliance on Imperial Capital's assurance that Zebra's stock price will gallop even higher -- are taking a big leap of faith that earnings will grow as promised.

There's not a lot of room for error at these prices. If Zebra misses a step, investors who bid Zebra up this year may just as quickly bid it down.