NetEase (NASDAQ:NTES) stock got a big shot in the arm after the company delivered a stellar third-quarter report on Nov. 15, putting fears about a slowdown in its business to rest in emphatic fashion. In October, investment banking firm Jefferies had downgraded the Chinese video gaming specialist, stating that a lack of new game launches would take a toll on revenue.

But a 35% year-over-year jump in revenue in the most recent quarter clearly shows that NetEase's mobile gaming business has continued improving, while its e-commerce business is improving rapidly with each passing quarter. These two businesses will be the cornerstone of NetEase's long-term growth, as evident from management's comments during the latest earnings call. 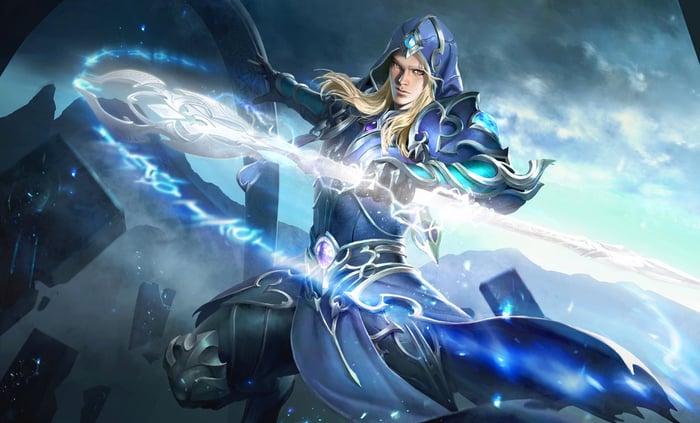 Mobile gaming is on a roll

NetEase's revenue from mobile games shot up to 68% of its total online gaming revenue in the quarter, up from 57% in the prior-year period. More specifically, mobile games now account for just over 44% of NetEase's top line, and their contribution will keep increasing thanks to the company's expansionary moves on multiple fronts.

For instance, NetEase is moving into international markets to grow its mobile gaming business beyond China. It has already introduced its Onmyoji franchise in Japan and Southeast Asia, and added South Korea to the list in the latest quarter. Looking ahead, NetEase is likely to launch this title in the U.S. and Canada soon as the company has received positive feedback regarding this title from developers.

NetEase's expansion into the Asia-Pacific and North American markets is a smart move as these two areas will account for 72% of overall gaming revenue this year, according to Newzoo. More importantly, these markets will get bigger by 2020 as global gaming revenue is expected to increase from $108.9 billion this year to $128.5 billion by the end of the decade.

Therefore, NetEase is doing the right thing by not restricting itself just to the highly competitive Chinese online gaming market. More importantly, it is not just trying to launch its existing games in new territories, but is creating region-specific content to win over gamers. For instance, NetEase introduced a Japanese-themed role-playing game last quarter that should help it connect better with users in that country.

Additionally, the company's strategy of introducing expansion packs to extend the lifecycle of its existing games is bearing fruit, as evident from the impressive revenue growth. The new content and storylines delivered through expansion packs help NetEase keep gamers engaged in the absence of any new title launches, and this keeps its revenue sources intact.

Looking ahead, NetEase's monetization opportunities will increase as the company has a strong mobile gaming pipeline, with no less than six titles on the way. Additionally, the successful launch of Minecraft should prove to be another tailwind for the Chinese internet giant.

Minecraft is already a hugely popular game in international markets, especially the Asia-Pacific region. When Microsoft subsidiary Mojang decided to launch this game in the Chinese market, it chose NetEase to distribute the franchise across mobile and PC devices for a five-year term. NetEase officially launched this game in China recently, receiving a tremendous response by clocking 30 million users  by the end of October.

More importantly, NetEase is already starting to monetize this title. Therefore, NetEase's mobile gaming business should go from strength to strength in the future as the company is pulling out all stops to achieve growth.

NetEase's e-commerce business grew at a faster pace than its video gaming business last quarter, clocking year over year growth of almost 80%. This business now supplies almost 30% of NetEase's total business, with its two e-commerce platforms -- Kaola and Yanxuan -- accounting for 71% of the segment's revenue.

Not surprisingly, NetEase has decided to invest aggressively in these two platforms to expand their reach and appeal among Chinese consumers. Earlier in November, NetEase announced that it will purchase $3 billion worth of products from U.S. brands over the next three years to cater to China's 109-million-strong middle class.

This move will increase the number of U.S. brands on Kaola from 900 to 3,000 over the next few years, allowing NetEase to tap the growing demand for foreign products in China. This is on top of the $3 billion investment that NetEase has to source European products for its e-commerce platform.

Furthermore, NetEase is building out its fulfillment infrastructure by increasing warehousing capacity in both the U.S. and China to expedite shipping times. It plans to add a new warehouse in New Jersey before 2017 ends, as well as increase the capacity of three other warehouses in New York and Los Angeles.

NetEase is also planning to build nine new warehouses in Europe, spanning markets such as Italy, Spain, France, and the U.K.

Despite enjoying almost 50% gains in the past year, the stock looks poised to move higher as strong catalysts in the gaming and e-commerce business pay off.