The recovery is faster than expected, and the strength is visible around the globe, indicating this could be the beginning of an expansion phase that investors in construction-machinery stocks have been waiting for.

And it's not just Caterpillar. From Japan's Komatsu (NASDAQOTH: KMTUY) and Hitachi Construction to America's own lifting-equipment expert Terex Corporation (NYSE:TEX) and cranes specialist Manitowoc Company (NYSE:MTW), order backlog is on the rise for all. Elsewhere, farm-equipment giants such as Deere & Company (NYSE:DE) and CNHI Industrial (NYSE: CNHI) are exploiting the strength in the construction markets to offset weakness in agriculture.

There's another interesting way to look at it. Strong demand in the aftermarket (i.e, used equipment) markets is usually a leading indicator of what's to come for the original-equipment manufacturers. Ritchie Bros. Auctioneers (NYSE:RBA), the world's largest auctioneer and seller of used heavy machinery, said during its recent earnings release that there's "significant equipment supply shortage especially in the U.S., as dealers and end users continue to experience high equipment utilization rates."

The verdict is clear, and as an investor, you wouldn't want to miss making money off the global construction boom. In other words, the time could be ripe to consider some construction-machinery stocks, with three top names being Caterpillar, Deere, and Terex. 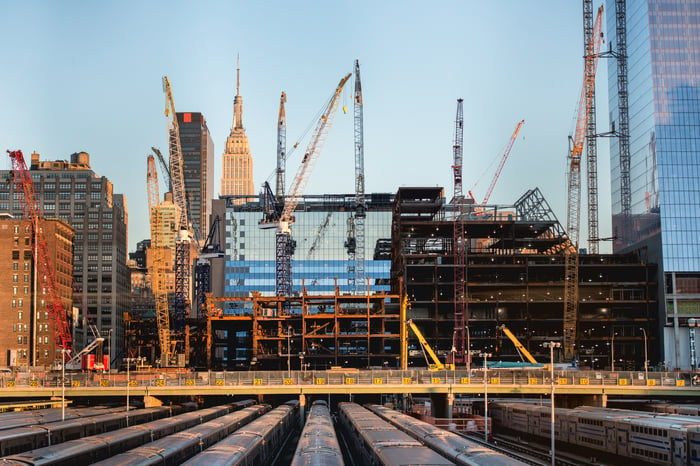 As the undisputed leader in the global construction-machinery industry, Caterpillar stands to be the biggest beneficiary of a construction boom. The opportunities could be even bigger if President Trump's $1 trillion infrastructure spending plan gets rolling, as Caterpillar would probably be a top government choice to help build roads, bridges, tunnels, pipelines, and waterworks.

In fact, construction industries is turning out to be Caterpillar's strongest segment so far this year, with the Asia-Pacific region recording double-digit growth in sales, buoyed by China. In North America, it is the "shortage" that Ritchie Bros. was referring to, which is volumes and prices. The auctioneer, which also has an alliance with Caterpillar, reported some big-ticket excavator sales in 2017, with Caterpillar's products ruling the roost.

The biggest advantage of owning Caterpillar over the other construction-machinery stocks is that it's also a play on the mining and oil and gas sectors -- two markets where the company's hold is as big as in construction. Miners, for instance, are reviving their sidelined projects in the wake of rising metal prices. That explains why Caterpillar's resource industries (that is, mining) sales have finally started to pick up after languishing for years.

Caterpillar looks pricey after its 48% run-up this year, but remember, it's a cyclical stock; and as I explained earlier, the construction business cycle appears to have bounced off its lows. With analysts projecting the company's earnings to grow nearly 40% in the next five years, you wouldn't go wrong betting on Caterpillar to gain exposure to the construction-machinery industry.

Construction and forestry contributed 22% to Deere's total machinery sales in 2017 and recorded 17% jump in sales to $5.7 billion for the full year. Comparatively, Deere's agriculture and turf business reported 9% growth in sales. As impressive as these numbers are, there's another reason investors in construction-machinery stocks should consider Deere.

Between construction and agriculture, the latter tends to be a lot more volatile and unpredictable because of the vagaries of climatic conditions and crop prices. Deere knows this well, which is why it's now focused on the construction side of its business. Deere is about to acquire Germany-based Wirtgen Group, a privately held manufacturer of road-construction equipment, in a deal estimated to be worth $5.2 billion. Wirtgen owns five premium brands and sells machinery in 100 countries. Deere expects to close the deal in coming weeks and believes it'll be immediately accretive to earnings.

Here's the biggest number you need to know: Deere projects its 2018 construction and forestry sales to grow a staggering 69% thanks to its Wirtgen acquisition. That should be reason enough for you to load up on Deere if you're looking to put some money into construction-equipment stocks.

Don't overlook the potential in this construction-equipment stock

Terex is the only heavy-machinery manufacturer in the U.S. aside from Caterpillar and Deere to have made it to the list of the 10 largest construction-equipment companies in the world by sales. But that isn't why I'm recommending the stock to investors seeking exposure to the industry -- it is Terex's diverse portfolio, recent restructuring efforts, and strong earnings growth that have caught my attention. 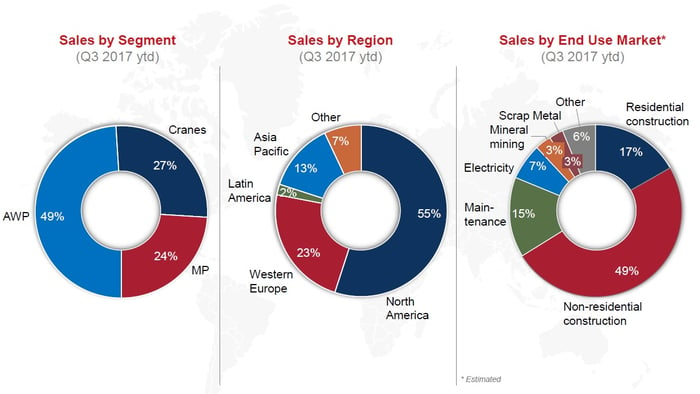 Terex's strong foothold in the construction-equipment markets can be linked to its diverse portfolio. Image source: Terex.

Terex is among the leading manufacturers of aerial works platforms, cranes, and materials processing solutions in the United States. Last quarter was the third such quarter when Terex upgraded its fiscal 2017 adjusted earnings-per-share guidance, encouraged by strong sales from all its segments. Terex now expects to earn adjusted EPS of $1.20-$1.30, versus $0.88 in 2016. Rival Manitowoc, comparatively, could end the year with losses as it struggles to find a footing as a standalone cranes company.

Terex also appears to have a stronger hold in China than Manitowoc, going by the $250 million supply deal for 5,000 aerial machines that it bagged during Trump's recent visit to the nation. Terex has been consolidating its operations in China and Germany and cleaning up its balance sheet to improve its financial standing, so much so that it's targeting returns on invested capital of 20% or more by 2020, compared with just about 6% in 2016. In short, Terex appears to be on solid footing to take advantage of a recovery in construction markets.

With a recent research report from Reportlinker projecting the global heavy construction-machinery market to grow at an annual compounded average rate of 7% between 2016 and 2021, these three stocks look poised to gain the most in the long run.