Please ensure Javascript is enabled for purposes of website accessibility
Free Article Join Over 1 Million Premium Members And Get More In-Depth Stock Guidance and Research
By Travis Hoium - Nov 30, 2017 at 10:40AM

If casino resort giant's era of growth is over, the investment thesis for its stock changes.

Las Vegas Sands Corp. ( LVS -4.19% ) is the biggest casino operator in the world, and holds a dominant position in the world's biggest gaming market -- Macau. But its shares haven't done more than bounce around since the early days of 2011, despite the company's strong profitability.

What investors may have to consider is that the investment thesis for Las Vegas Sands has changed: It's no longer a growth stock, but rather a cash flow stock. With that in mind, is it a buy today? Not a lot of growth left in Macau

Macau is by far Las Vegas Sands' biggest market, generating more than half of the company's EBITDA in the third quarter. Singapore, where gaming revenue trends tend to be similar to those in Macau, accounts for another 35% of its business, so this is an Asia-heavy company.

That's a critical point because those two markets are extremely profitable, but there hasn't been much growth to be had in Asia overall over the last few years. In Macau, a Chinese anti-corruption campaign  drove a drop in gaming overall since 2014. The territory has begun to recover, but the 19.2% jump in Macau's gaming revenues in 2017 hasn't flowed to the company the way you might expect. VIPs are driving growth and those high rollers are patronizing competitors like Wynn Resorts ( WYNN -3.50% ) and Melco Resorts ( MLCO -3.19% ) that cater more to the high-end player. And a series of new resorts are cannibalizing any growth that might otherwise have flowed to Las Vegas Sands. The result has been the wavy -- and falling -- revenue chart you see below. 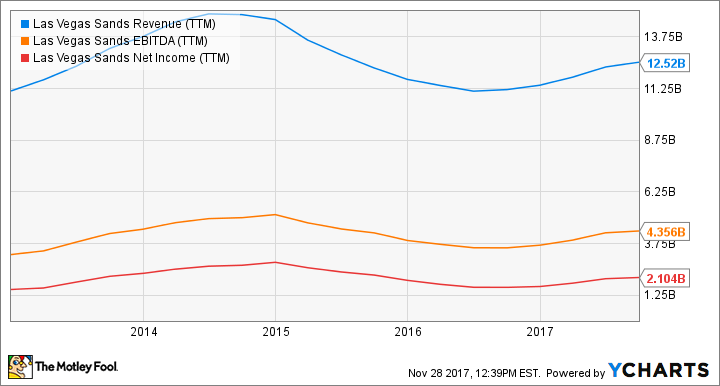 Las Vegas Sands is still a cash flow machine with over $4 billion in EBITDA -- a proxy for cash flow from a resort -- and most of that comes from regions where the gaming industry is restricted to a few companies. But we shouldn't be calling LVS a growth stock today.

A dividend investors should love

Solid cash flow has given Las Vegas Sands incentives to pay out solid -- and growing -- dividends. As the chart below illustrates, quarterly payouts have grown consistently over the last few years and the company hasn't had to increase its debt, despite spending $2.5 billion to build the The Parisian in Macau. 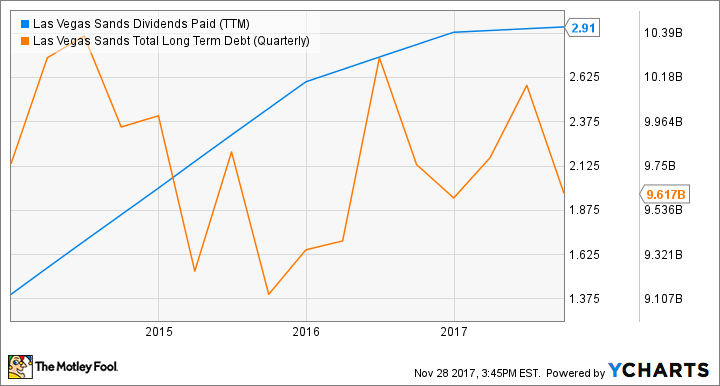 Right now, its dividend yield of 4.4% is one of the best in the gaming industry, and is backed by stable cash flows. I wouldn't expect much  growth beyond 2018's target payout of $3.00 per share given the high percentage of cash flow being used to fund the dividend, but a high yield stock doesn't necessarily have to provide dividend growth.

Is Las Vegas Sands a buy?

At the end of the day, I think Las Vegas Sands' position as a gaming industry leader and its strong dividend are enough to make the stock a buy. That's why I'm keeping its thumbs up rating on my CAPS page, and remain bullish on the stock and the gaming industry more broadly. But the growth that drove it higher after the Great Recession is likely a thing of the past.