The retail industry is an increasingly dangerous place in which to invest. Changing consumer shopping habits are decimating once-venerable businesses, and new upstarts are emerging to replace the old guard.

Yet in this dynamic arena, opportunities exist for intrepid investors -- if you know where to look. With this in mind, let's evaluate J.C. Penney (OTC:JCPN.Q) and Macy's (NYSE:M) to see which is the stronger investment opportunity today.

As e-commerce continues to disrupt a large swath of the traditional retail industry, only the strongest retailers are likely to survive over the long term. Financial fortitude is therefore of the utmost importance. Let's take a look at how J.C. Penney and Macy's stack up in this regard:

Neither of these retailers is exactly a financial fortress. Both have large net debt positions, although they've been paying down debt in recent quarters. Yet between the two, Macy's generates far greater earnings and free cash flow, which gives it the edge when it comes to financial strength.

Growth has been hard to come by for Macy's and J.C. Penney in recent years. In fact, these retailers have seen their revenues fall as they've been forced to close hundreds of stores in response to declining traffic. 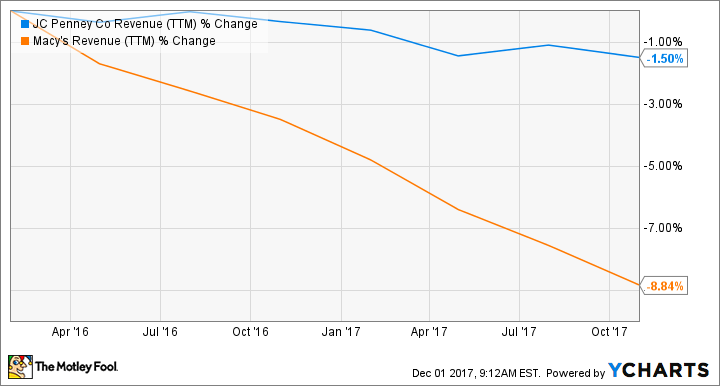 At this point, simply stabilizing their same-store sales would be a major victory for these struggling retailers. Only then can they hope to deliver sustained profit growth. 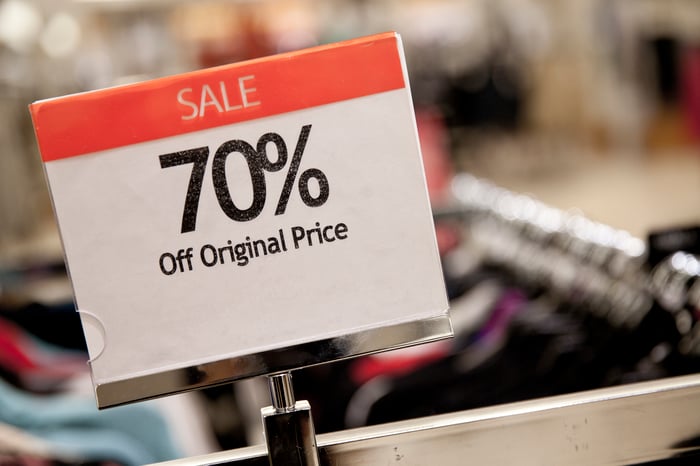 J.C. Penney and Macy's have seen their stock prices plunge over the past year. Could their shares now be a bargain? Image source: Getty Images.

No better-buy discussion should take place without a look at valuation. Let's check out some key value metrics for J.C. Penney and Macy's, including price-to-sales, price-to-earnings, and price-to-free-cash-flow ratios.

J.C. Penney's shares are less expensive than Macy's in terms of price-to-sales, while Macy's is cheaper on a price-to-free-cash-flow and forward P/E basis. That's to be expected, as Macy's is the more profitable business, with $679 million in net income over the past year compared to a loss of $178 million for J.C. Penney. I should note, though, that Macy's profits are inflated somewhat by asset sales. Still, profits and cash flow are what investors seek, so I'll give a slight edge to Macy's in this valuation category.

After the carnage of the past year, investing in retail stocks often requires picking among the rubble in search of gold. It's a risky strategy, considering the competitive challenges many traditional retailers are facing. But between J.C. Penney and Macy's, I'd go with Macy's due to its larger cash reserves and stronger free cash flow production. In the end, Macy's true value may lie in its real estate holdings, which some analysts believe could be worth as much as $20 billion -- nearly three times its current market cap of $7.2 billion. This could help put a floor under Macy's stock price, even if its core retail operations continue to struggle.