Could processing payments, listing real-estate, or greasing the wheels of e-commerce produce Wal-Mart like returns?

Want to know what a dynastic wealth maker looks like in real life? Take a look at what Wal-Mart (WMT 1.65%) has done for investors who have been patient enough to hold for over 40 years.

A simple $10,000 investment has grown to more than $2 million today, inclusive of dividends. 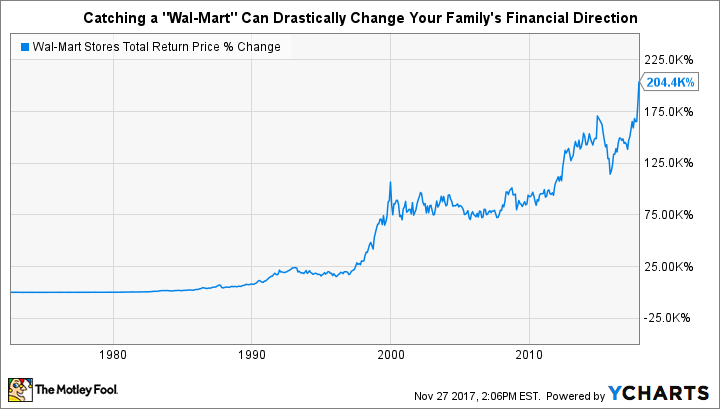 Of course, it's easy to cherry-pick the winners looking back. It's another thing entirely to identify them beforehand. While there's no guarantee they'll produce the same results, our Motley Fool investors have identified three companies that look an awful lot like Wal-Mart back in 1970: Square (SQ 7.24%), Shopify (SHOP 4.99%), and Zillow (Z 2.44%) (ZG 2.61%).

Matt Frankel (Square): It feels a bit ironic to be comparing Square to Wal-Mart. After all, Wal-Mart's rise was quite damaging to many small businesses, while Square's entire mission is to empower small businesses to reach their full potential.

However, I feel that Square could have just as much of an impact on the retail landscape as Wal-Mart has, if not more, and that the company's growth story is still in its early innings.

In its core payment-processing business, Square's addressable market is enormous. Two-thirds of businesses around the world still don't accept card payments, and worldwide card payment volume is expected to climb as high as $55 trillion per year by 2025. To put this in perspective, Square's current annualized payment volume is about 0.1% of this amount.

Also keep in mind that providing payment processing solutions is just one piece of Square's business. There are several other components of Square's business that could grow into a small business ecosystem over the coming years. For example, Square Capital, the company's small business lending platform that allows businesses to borrow money based on their sales, has grown by 45% over the past year, and is still a relatively small lending operation.

Square also has other growth avenues, such as a peer-to-peer payments platform, gift-card services, and more. The company's growth over the past few years has been tremendous, but it could be just getting started.

To better capitalize on that opportunity, Zillow continues to roll out innovative new products to delight its visitors and advertisers alike, most recently including a new mobile app that allows real estate professionals to easily create 3D tours at no cost, and revamped mobile tools to simplify agent-client communications.  And Zillow isn't afraid to acquire technology if need be; last quarter it also bought new construction data management specialist New Home Feed to help streamline the process for builders to send new construction listings to its platforms.

In short, Zillow is embracing its leadership position and innovative roots to become a one-stop shop for all things real estate. For investors willing to buy now and watch its growth story continue to play out, I think it could easily rival Wal-Mart's returns.

Benefiting from the e-commerce transition

Brian Stoffel (Shopify): Back in Wal-Mart's nascent stages, it was slowly becoming apparent that if a company could accomplish enormous scale and offer goods for a razor-thin margin, it could make a fortune off the volume of purchases occurring nationwide.

That's more or less where we are with e-commerce. While some of the biggest players -- ahem, Amazon.com -- are already established, there's still a ton of room for growth. Perhaps one of the most overlooked aspects of e-commerce is the runway for growth that still remains.

Even after years of booming growth, e-commerce still accounts for just 9.1% of all retail purchases in America. Shopify will be key in helping that figure to grow in the years ahead.

The company offers up a platform for merchants of all sizes -- from one-person, side-project start-ups to megacompanies like Tesla -- to establish a presence on the Internet and handle the logistics that come with running an e-commerce operation.

While revenue retention figures aren't available, switching costs are pretty high once a vendor signs on. After setting up logistics, a website, and a social-media presence, a merchant would face significant costs -- financial, downtime, and in terms of headaches -- to transition everything to a different platform.

In just over two years since going public, Shopify has grown its user base from 162,000 merchants to over 500,000. At the same time, revenue has climbed 370%, from $123 million to $581 million. That has me believing Shopify could produce results equally as impressive as Wal-Mart's over the next 40 years.

Is Shopify Stock a Buy Now?

Shopify's Down 80%: Should You Buy the Dip on this E-Commerce Stock?