Please ensure Javascript is enabled for purposes of website accessibility
Log In Help Join The Motley Fool
Free Article Join Over 1 Million Premium Members And Get More In-Depth Stock Guidance and Research
By Keith Speights - Dec 4, 2017 at 8:32AM

A marriage between this big pharma and big biotech could make both companies' shareholders happy.

You might think it's a crazy idea. Maybe it is a crazy idea. But sometimes crazy ideas are the ones that wind up being the best. So here it is: Pfizer (PFE 2.15%) should buy Celgene (CELG) in 2018.

Granted, there's a big hurdle with a deal such as this. Celgene's market cap is close to $80 billion. Pfizer's cash stockpile (including cash, cash equivalents, and short-term investments) stood at a little under $17 billion as of Oct. 1. The big pharma company already has nearly $44 billion in debt. Buying Celgene would certainly put a strain on Pfizer financially.

I think Pfizer could pull it off, though. And I think there are some big pluses to a combination of these two companies. Here are three key reasons why Pfizer should buy Celgene in the coming year. 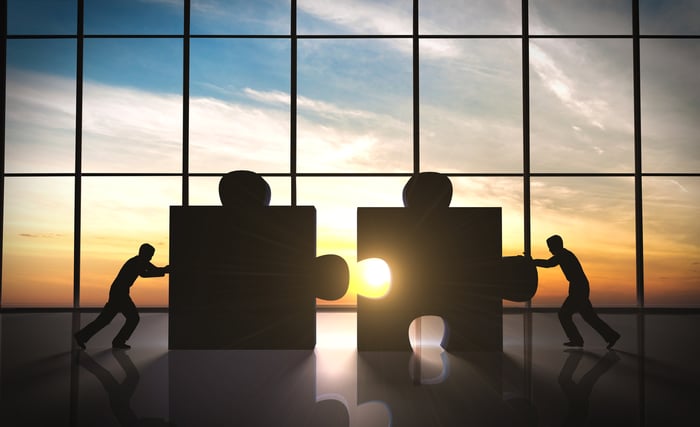 1. It would boost growth significantly

Pfizer's earnings growth over the last few years hasn't been anything to write home about. The patent cliff took a heavy toll on the drugmaker -- and is still doing so to some degree. Even with Pfizer's acquisitions last year of Medivation and Anacor, analysts project the company will grow earnings by only 6% over the next five years.

Celgene, on the other hand, expects to grow sales by 14.5% annually through 2020 and adjusted earnings per share by 19.5% per year. Blood cancer drugs Revlimid and Pomalyst continue to enjoy solid momentum. Even after a late-stage failure for GED-0301 in treating Crohn's disease, the biotech's pipeline is loaded with potential blockbusters, including ozanimod, luspatercept, bb2121, and marizomib.

Buying Celgene would boost Pfizer's growth significantly. Pfizer is on track to generate revenue of around $52 billion this year. Celgene's revenue should hit at least $19 billion by 2020, up from roughly $13 billion in 2017. The most impressive change, however, would be on Pfizer's bottom line. The company will probably earn around $12 billion this year. Celgene should make close to $9 billion in net income three years from now.

What about financing the deal? Pfizer could do it. Remember, this is the company that wanted to merge with Allergan and AstraZeneca in the past. Neither of those drugmakers generates the profit margins nor do they have the growth prospects that Celgene does.

Pfizer really wants to expand its footprint in oncology. It already has rising stars with breast cancer drug Ibrance and prostate cancer drug Xtandi. However, sales for chemotherapy Sutent are slipping and are likely to drop even more with newer rivals on the scene. While Pfizer and partner Merck KGaA have several late-stage studies in progress for Bavencio in treating multiple types of cancer, the immunotherapy recently suffered a setback in a late-stage study targeting gastric cancer.

An acquisition of Celgene would bring a boatload of current and potential blockbuster cancer drugs into Pfizer's fold. There is little overlap between the two companies' portfolios and pipelines in hematology. It's a different story in solid tumors, since Celgene has Abraxane. However, Pfizer would probably love to have Celgene's experimental glioblastoma drug marizomib and CC-486, which targets treatment of metastatic breast cancer and non-small cell lung cancer, in its arsenal.

It's also important to note that Celgene has worldwide rights to Beigene's PD-1 inhibitor BGB-A317. If there are more clinical setbacks for Bavencio, BGB-A317 could be a great "plan B." Even if not, Beigene's drug could be differentiated from other PD-1 inhibitors by having fewer interactions with immune cells that lower efficacy.

The bigger clash between the two companies' pipelines is in inflammation and immunology. Celgene's Otezla competes against Pfizer's Xeljanz. Both companies are also developing new drugs that target the same indications. Still, Celgene's best prospect in this therapeutic category is ozanimod, which is most likely to win a first approval for treating multiple sclerosis -- an indication that isn't in Pfizer's crosshairs right now.

I wouldn't say that the product lineups and pipelines for Pfizer and Celgene are a perfect fit. However, on an overall basis, Pfizer would gain a lot by picking up Celgene's drugs.

3. The timing could be better than ever

There are several factors that make the timing of a Pfizer-Celgene combination better than ever. First, Celgene is cheaper than it's been in a while as a result of what I viewed as investors panicking in the wake of the pipeline setback for GED-0301 and some headwinds for Otezla.

Second, the prospects for corporate tax reform in the U.S. appear to be pretty good, although it's still possible that a deal falls apart. Pfizer keeps a significant amount of its cash parked overseas, so a lower tax rate on repatriating that money could be ideal for spurring a deal.

Third, I think it's obvious that Pfizer is itching to do something big. As alluded to earlier, the company tried to buy AstraZeneca for $118 billion three years ago. Pfizer scuttled its plans to acquire Allergan only after the U.S. government changed policies that minimized any tax benefits from the deal. Pfizer's executives recently stated that they're "agnostic to size" when making acquisitions, which could be interpreted as they're not afraid at all to make yet another attempt for a big takeover.

I have no idea if Pfizer is actually eyeing an acquisition of Celgene. There has been some speculation that the drugmaker would be more likely to try to buy Bristol-Myers Squibb (BMY 0.34%). Pfizer and Bristol already have a relationship through their partnership with blood thinner Eliquis. However, despite its enormously successful PD-1 inhibitor Opdivo, Bristol doesn't have the pipeline nor the growth prospects that Celgene has. It's also a tad more expensive than Celgene is right now.

The odds of a Pfizer-Celgene combination probably aren't all that high. But is there a chance? I think so. As a shareholder of both Pfizer and Celgene, I'd like to see what kind of deal could be put together. In my view, there's a possibility for investors in both stocks to walk away winners.