It may have taken a little while for production to ramp a year ago, but Apple's (NASDAQ:AAPL) AirPods are becoming something of a surprise hit. The wireless headphones enjoy positive reviews and are dominating the market.

At the end of August, market researcher NPD estimated that AirPods had grabbed 85% revenue share in the U.S. market for wireless headphones. At that point, year-to-date unit sales in the U.S. had numbered approximately 900,000. Unfortunately, investors can't derive Apple's unit sales from these estimates, since revenue share is measured in dollar terms. Generally, Apple's premium pricing allows it to grab disproportionate revenue share compared to its unit share.

Well, KGI Securities analyst Ming-Chi Kuo is out with some fresh estimates on AirPods, according to MacRumors. 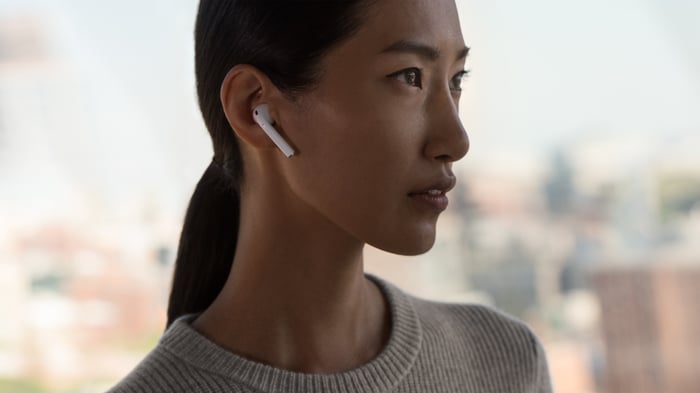 Availability in the first half of 2017 was poor as Apple suffered from supply constraints as it ramped production following the (delayed) launch in December 2016, but AirPods are widely available now. KGI believes that Apple has transitioned to "an improved assembly process and increased capacity from Luxshare as the new assembler," referring to a secondary contract manufacturer in addition to Inventec.

AirPods results are reported in Apple's "Other Products" segment, which also includes important products like Apple Watch. Through the first three quarters of 2017, other products brought in $36.4 billion in sales.

The company also includes AirPods in its unofficial wearables business, a segment that management often refers to without reporting official results for. Apple Watch and other wireless headphones like BeatsX are also considered wearables, according to Apple's definition, and all we know is that Apple's wearables business generated at least $6.7 billion in sales for fiscal 2017, due to Apple's statement that this business is now the size of a Fortune 400 company. On the earnings call last month, CEO Tim Cook also noted that wearables revenue in the September quarter jumped 75%.

After controversially killing off the headphone jack last year, Apple continues to push into the wireless future.