GM's little electric car had its best month yet in November.

General Motors (GM -5.08%) said it delivered 2,987 Chevrolet Bolt EVs in the United States in November. It was the best monthly sales total yet for the Bolt -- and the eighth month in a row in which its sales were up from the month prior.

At least for now, the Bolt is America's best-selling electric vehicle, having outsold all other contenders last month, including all three Tesla (TSLA -4.59%) models. Is GM's little electric crossover turning out to be a hit? 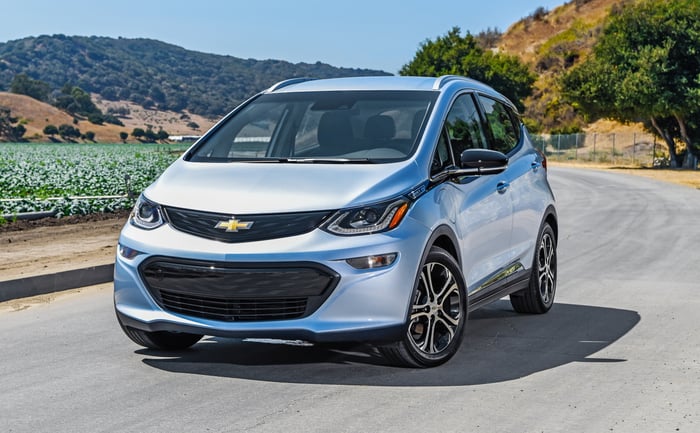 The Chevrolet Bolt EV was the best-selling all-electric vehicle in the U.S. in November. Image source: General Motors.

Yes, the Bolt is beating Tesla -- for now

InsideEVs tracks the number of plug-in vehicles sold in the United States every month, including both battery-electric vehicles and plug-in hybrids. Its figures for Tesla are estimates, as (unlike nearly all other automakers) Tesla reports its sales numbers quarterly, rather than monthly. But InsideEVs' estimates have been proven over time to be pretty accurate. Data source: InsideEVs and General Motors. Chart shows InsideEVs' estimates for U.S. sales of each of the three Tesla models in November, and the official GM sales total for the Bolt.

The Bolt didn't quite manage to repeat the feat it pulled off in October, when it outsold all three Teslas combined in the U.S. But it outsold each of them -- and all of the other battery-electric vehicles available in the United States -- by significant margins in November. That's something that still seems worthy of note.

Here's a look at how the Bolt's U.S. sales have fared since December 2016, when the first Bolts arrived at dealers. 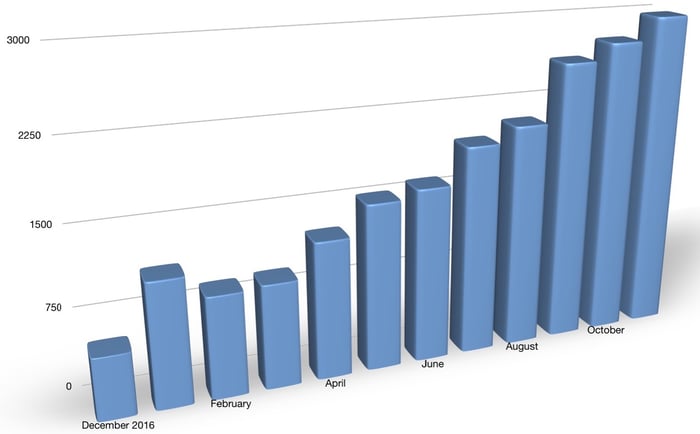 As you look that this chart, note that the Bolt wasn't really available nationwide until August. The month-over-month increases we see before then are mostly a function of increasing supply, as GM gradually made the Bolt available to more Chevrolet dealers across the country. But the gains have continued since then: Clearly, there's a fair amount of demand for the little electric Chevy.

I suspect that the Bolt's days as the best-selling electric vehicle in the U.S. are numbered, and the number probably isn't all that high, for two reasons:

It's likely that the Model 3 will take the U.S. electric-vehicle sales crown before long. (If not, then Tesla has a big problem.) The all-new Leaf may or may not outsell the Bolt, but it's likely to give it a fair fight for second place on our charts.

The Bolt is just the beginning of GM's electric-vehicle ambitions

GM's plans for electric vehicles go far beyond the Bolt, of course. CEO Mary Barra recently made clear that GM is planning at least 20 new all-electric vehicles by 2023. The first two, thought to be crossover SUVs for the Buick and Cadillac brands, will share technology with the Bolt; the vehicles that follow will use a new architecture that GM is developing now.

Those first two are expected within 18 months. That's when we'll start to see whether GM can build on the early success of its little electric Chevy.