Pinnacle Entertainment and Penn National may be the latest gambling companies considering a merger.

Competition among regional gambling companies has hampered growth and profitability for most of the last decade. As a result, the leading companies in the industry are deciding it's better to combine than to compete. Pinnacle Entertainment (NASDAQ: PNK) bought Ameristar Casinos in 2013 for $2.8 billion, and Eldorado Resorts (ERI) bought Isle of Capri Casinos earlier this year.

Now, Penn National Gaming, Inc (PENN -0.66%) is considering buying Pinnacle Entertainment, bringing together two of the biggest regional gaming companies in the country. If the merger happens, the combined company would have a presence in every major gambling market in the U.S. except the Las Vegas Strip. 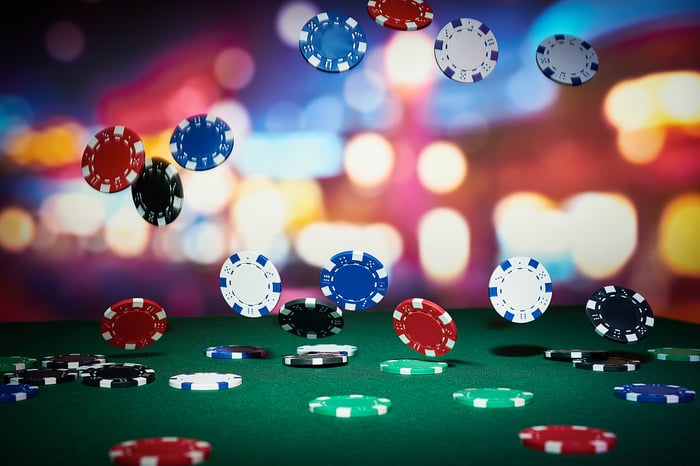 A deal we could see a mile away

In reality, Penn National and Pinnacle Entertainment have been dancing toward each other for a few years now. Gaming and Leisure Properties Inc (GLPI 0.81%), the real estate investment trust created by Penn National, owns most of the real estate where Pinnacle Entertainment operates casinos. The two are effectively partners, and the deal will just bring their gambling operations together.

The idea behind a merger like this would be to build a network of casinos that would keep regional players in-network rather than playing elsewhere. There would also likely be "synergies" proposed as part of the justification for a merger, although synergies don't usually play out as expected.

The reality is that Penn National and Pinnacle are facing both increased competition, as gambling has spread across the U.S., and stronger competition, primarily from Caesars Entertainment (CZR) and MGM Resorts (MGM -0.17%). Combining Penn National's 27 casinos with Pinnacle's 16 would create a bigger network to build on.

Caesars already has 18 resorts and MGM has 27 hotels, in locations as varied as Las Vegas and Springfield, Massachusetts, where it's building a new property. Bigger companies have been able to leverage their size and cash flow to expand in markets formerly dominated by regional players. MGM's National Harbor, a $1.1 billion resort in Maryland, is an example of a project built at a scale that smaller, regional players can't compete with. And as these megaresorts are built across the country, they draw players from the regional gambling parlors where Penn and Pinnacle have made their living.

Are the days of small casinos over?

I don't think a merger of Penn and Pinnacle will change the general trends taking place in gaming today. Gaming resorts are getting bigger and flashier as more states open up gambling to generate revenue. And as new casinos open in or closer to major urban areas, many relatively remote areas of the Midwest and South, where a lot of the gambling consolidation has taken place in recent years, could see competition put pressure on traffic.

For investors in either company, a greater scale may help margins slightly and improve profitability. But unless the Penn-Pinnacle combo joins the fight for megaresorts around the U.S., I think individually they have an uphill battle against bigger players long-term.