The supermarket just bucked the conventional wisdom with its latest earnings report.

Back in June, analysts were getting ready to write Kroger's (KR -0.92%) obituary. Shares of the supermarket giant fell 26% over a two-day span after the company first reported a dismal earnings report and then got whacked by news that Amazon.com (AMZN -2.58%) was buying Whole Foods Market.

The news sent shockwaves across the grocery industry, but Kroger, as the nation's largest traditional supermarket operator, seemed to have the most to lose given Amazon's reputation for cutthroat competition and slashing prices. However, Kroger's third-quarter earnings report shows the company is back on track, despite Amazon implementing significant discounts when it took over Whole Foods back in August. 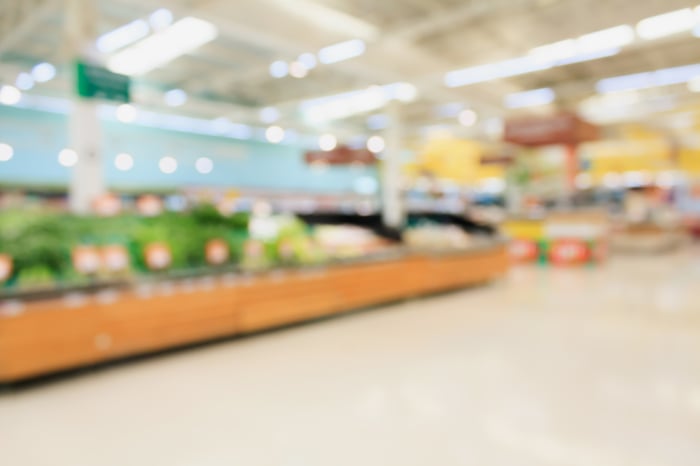 CEO Rodney McMullen said the company had its best Black Friday ever for general merchandise, and touted results from its Restock Kroger initiative, a turnaround plan based on data optimization, private-label brands, and improving the digital experience, among other strategies.

In addition to the strong quarter, Kroger's performance also dispelled the myth that traditional grocery operators are going to get crushed by Amazon now that it's taken over Whole Foods.

It's clear why the market is so fearful of the combination of Amazon and Whole Foods. Amazon has a reputation for decimating brick-and-mortar competition in retail sectors like books and electronics as it sacrifices profit for market share and uses its Prime loyalty program to provide unmatched convenience.

However, when it comes to groceries, the reality is much different. Prior to the merger, both Amazon and Whole Foods were struggling in that category. Despite launching Amazon Fresh ten years ago, the e-commerce giant had failed to gain significant traction in the $800-billion industry, while Whole Foods had posted seven straight quarters of comparable sales declines as rivals like Kroger and Costco Wholesale (COST 1.76%) launched their own private-label organic products, undermining Whole Foods' core strength. Kroger, for example, grew its Simple Truth organic line into a $1-billion brand in just two years.

Even after Amazon took over Whole Foods, it still has just a small share of the grocery market, as the chart below shows.

As you can see, Amazon/Whole Foods is still a small player in groceries, less than half the size of Costco, Kroger, and Wal-Mart. Despite Amazon's shock-and-awe pricing tactics when it took over Whole Foods, which included slashing prices on popular products like bananas, salmon, and organic eggs, Kroger, Wal-Mart, and Costco have all turned in strong results recently. Wal-Mart shares jumped 11% after it reported 2.7% comparable sales growth in its third-quarter earnings report, its fastest clip in several years. Costco, meanwhile, has seen comparable sales jump 8.7% over the last twelve weeks as it's launched new e-commerce initiatives. Both Costco and Wal-Mart are trading at all-time highs, indicating they've passed the Amazon test.

With nearly 2,800 grocery stores, Kroger has about six times the number of supermarkets as Whole Foods, meaning that Kroger may pose more of a threat to Whole Foods than Whole Foods does to Kroger. For example, 60% of Whole Foods locations are within 10 miles of a Kroger, but a much smaller percentage of Kroger locations are in direct competition with Whole Foods.

With its innovative experiments, Prime loyalty program, and price cuts, Amazon/Whole Foods may build on its modest market share, but the threat shouldn't be exaggerated. Kroger, Wal-Mart, and Costco are more than capable of rising to the challenge, as they have shown over the last three months.

Unlike books or electronics, the vast majority of grocery sales will continue to take place at brick-and-mortar stores for the forseeable future; perishable goods are difficult to deliver, and many Americans prefer to personally select their groceries. As long as that's the case, these industry leaders will continue to have an advantage over Amazon even as the e-commerce leader flexes its muscles with Whole Foods.