Please ensure Javascript is enabled for purposes of website accessibility
Log In Help Join The Motley Fool
Free Article Join Over 1 Million Premium Members And Get More In-Depth Stock Guidance and Research
By Jeremy Bowman - Jan 16, 2016 at 8:09AM

Though the line has been repeated endlessly in the financial media, Whole Foods is in closer competition with a few other chains.

Armed with this knowledge, it would be easy to conclude that Kroger's rise has come at the expense of Whole Foods. The supermarket giant that owns banners including King Sooper's, Fred Meyer, and Ralph's has made organic food a priority. The Simple Truth line is growing by double digits, and its organic offerings are almost always cheaper than Whole Foods'.

Their stock performances seem to confirm this story, and the financial media has repeated it endlessly. 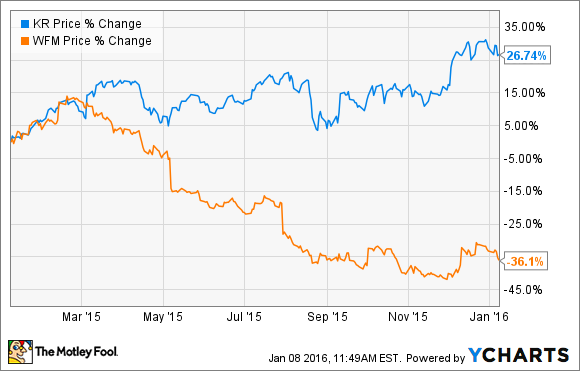 However, there's one problem with this theory. Whole Foods and Kroger stores don't often overlap. Whole Foods is strongest on the coasts, while Kroger tends to dominate the heartland.

The grocery version of the electoral map
In terms of number of stores per person, no state has more Whole Foods than Massachusetts, with 30, or about one for every 225,000 residents. Kroger, on the other hand, has no stores in the entire Northeast, a region where Whole Foods has 84 stores, making up more than a fifth of its national presence. Kroger is virtually nonexistent in Florida as well, with just one store, while Whole Foods has 24. In total, Whole Foods has 120 stores in states where Kroger essentially doesn't operate. That's about 30% of its national fleet.

Beyond the different geographic profiles, Whole Foods and Kroger also cater to different customers. Whole Foods doesn't discuss its site selection strategy, but there's a clear pattern. According to observers, the company favors education levels above the usual demographic criteria.  It counts on customers with higher education levels who are willing to spend more on healthy or alternative products. They are the type of folks who are well traveled and have sophisticated palates. If there's a Whole Foods in your neighborhood, chances are it's a gentrifying area, or it's already made it.

Kroger, on the other hand, casts a wider net, searching for locations in an area with a minimum median income of just $40,000. For comparison, nationwide median household income is just above $51,000.  While Kroger has gone more upscale in recent years with the acquisition of Harris Teeter and more recently Hiller's Market, the majority of its stores of a more traditional format, targeting a different customer than Whole Foods.

Whom is Whole Foods really competing with?
While Kroger's entry into organics and specialty foods has probably pilfered some of Whole Foods' customers, the more likely culprits are Costco Wholesale (COST 0.75%) and Trader Joe's, both of which operate predominantly on the coasts and target a similar customer as Whole Foods. Privately held Trader Joe's opened 20 new stores last year and has about the same number of domestic locations as Whole Foods. Though the chain is known for unique, organic, and healthy food, its prices also tend to be much lower than Whole Foods'. As a result, Trader Joe's sales per square foot is $1,750, the best in the industry and nearly double that of Whole Foods. Both chains also claim Los Angeles as their top market, and Whole Foods' new downscale 365 chain, which targets millennials and offers lower prices, also seems decidedly aimed at Trader Joe's.

Like Trader Joe's, Costco is also known for low prices, but many readers may be unaware that Costco has taken the organic throne away from Whole Foods, becoming the No. 1 seller of such products this year, according to analysts. The warehouse club now sells more than $4 billion in organic foods a year, which has doubled in just the past couple of years. Costco has also put up comparable sales growth of 6% or more for several years, grabbing a greater share of the grocery industry on the way.

In the end, it may not matter for Whole Foods whom it's losing sales to. Organic food has gone mainstream, and the nation's largest supermarket chains have taken notice. The company's high-end brand, product line, and experience are no longer enough to build shareholder value. To compete, it needs to bring prices in line with its peers and find yet another way to distinguish itself.

John Mackey, co-CEO of Whole Foods Market, is a member of The Motley Fool's board of directors. Jeremy Bowman has no position in any stocks mentioned. The Motley Fool owns shares of and recommends Costco Wholesale and Whole Foods Market. Try any of our Foolish newsletter services free for 30 days. We Fools may not all hold the same opinions, but we all believe that considering a diverse range of insights makes us better investors. The Motley Fool has a disclosure policy.