Sprouts stock took flight after the release of a strong third-quarter earnings report on Nov. 2. Shares gained nearly 9% in the trading session following the release and appreciated steadily during the rest of the month.

The organization reported a 16% increase in revenue in the third quarter against the prior year and a comparable store sales increase of 4.6%. For the first three quarters of 2017, Sprouts has booked a top-line improvement of 15% and comps expansion of 2.4%. More impressively, the company's gross margin of 29.1% is just 40 basis points shy of 2016's gross margin, despite an extremely competitive grocery environment. 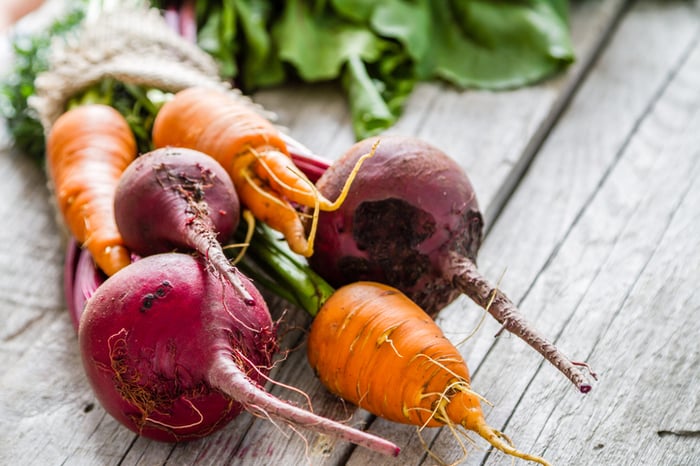 As I wrote recently, fears that Amazon.com's (NASDAQ:AMZN) acquisition of Whole Foods would seriously impair Sprouts' business are proving to be overblown, at least for now. The company tends to index its pricing to ensure competitiveness with conventional grocers, so Whole Foods' initial forays into deeper discounting haven't made a discernible impact on Sprouts in 2017.

Investors have also worried this year over steep impending price competition among major grocery players, as German discount grocers Aldi and Lidl seek to gain a heftier share of the U.S. market. So far, however, new store development pipelines for both brands are centered on the east coast, where just 7% of Sprouts stores are located -- although Sprouts does plan to open more stores in this region going forward.

Sprouts has demonstrated in 2017 that its customer base and pricing structure are differentiated enough from Whole Foods (and conventional grocery concepts) that it can continue to far outpace the industry in revenue growth.

In addition, not only has Sprouts maintained its two-hour home grocery delivery partnership with Amazon's Prime Now service, but management recently informed investors that it will broaden the service beyond the eight initial cities next year. I, for one, think this signals a potential for Sprouts to become Amazon's next grocery acquisition target.

As for Sprouts' stock price, after racing out of the gate in early 2017 to a near 33% gain, the stock fell into the red following Amazon's Whole Foods acquisition announcement this summer. But investors are increasingly confident that the company's business model will hold up in this difficult industry going forward. As of this writing, shares have regained most of their lost ground, posting an impressive 27% gain year to date.