The holidays may be a quiet time for many publicly traded companies, but that's never the case for Walt Disney (NYSE:DIS). Big movies at the corner multiplex and huge crowds at its theme parks for Christmas and New Year celebrations make the media giant a pretty busy player at a time when most companies are trying to schedule their ugly sweater office parties.

News never sleeps at the House of Mouse. Let's take a look at some of the days that could loom large for Disney this month. 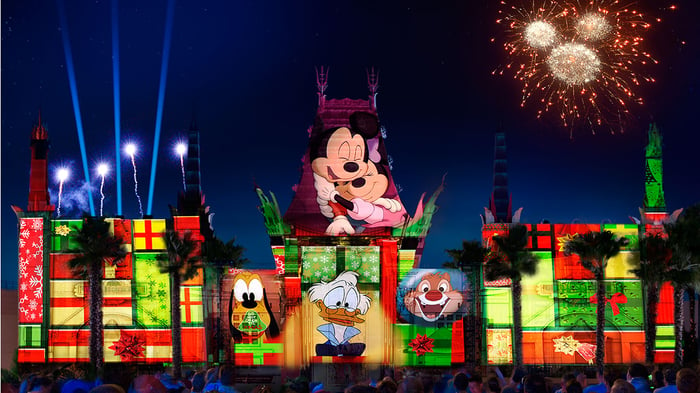 Disney's Coco is a hit, and this weekend, it will shed 22 minutes of excess baggage. Pixar's latest computer-animated release was paired up with Olaf's Frozen Adventure, a short featuring Frozen's iconic snowman, when it hit theaters two weeks ago. The animated short will be removed from screenings starting this weekend.

The internet has blown up with mixed reactions to Olaf's Frozen Adventure. Pixar has typically added an animated short ahead of its releases, but not one that is 22 minutes long. Parents with young children are complaining about having to wait more than half an hour by the time the movie trailers and short are done to get to the feature presentation. There's also no shortage of moviegoers that just don't like the short or have tired of the Frozen franchise, a problematic development since Frozen 2 hits theaters in 2019.

It's not clear if the short is being removed as a result of the public outcry or if it was only supposed to run for a limited time. The end result could be good news for both Disney and multiplex operators. Eliminating Olaf's Frozen Adventure will let exhibitors squeeze in one if not two extra daily showings of Coco per screen. A whopping 96% of the critics and audiences polled by Rotten Tomatoes are digging the Day of the Dead-themed flick.

CNBC is reporting on Tuesday that Disney could have a deal in place to acquire key assets from Twenty-First Century Fox (NASDAQ:FOX) (NASDAQ:FOXA) as early as next week. Chatter that Disney was interested in snapping up Twenty-First Century Fox's movie and TV studios as well as some of its international assets and cable networks surfaced a month ago, but those same rumors claimed that the talks had ended. The Wall Street Journal reported yesterday that the talks were gaining momentum again, and now CNBC is hearing that a deal can be announced by next week.

Disney isn't afraid to cut big checks for content. Pixar, Marvel, and Lucasfilm buyouts have all come under CEO Bob Iger's watch. A deal with Twenty-First Century Fox would likely find Disney receiving film rights to Marvel's X-Men franchise as well as James Cameron's Avatar, which now has a starring role in Disney's Animal Kingdom in Florida. There are also many other interesting properties for Disney to monetize if a deal does in fact materialize.

The biggest movie of the year will be Star Wars: The Last Jedi, and the eighth installment in Disney's Star Wars juggernaut hits theaters next weekend. Theater owners that have seen box office receipts decline 4% year to date could use a holiday smash.

The film will be huge even if critics pan the movie, and for Disney, this is just the beginning. It has Star Wars consumer products it hopes to sell over the holidays, and it's toiling away at 14-acre expansions at theme parks in Florida and California to add Star Wars: Galaxy's Edge come 2019.

The most visited theme park in the world is Disney World's Magic Kingdom in Florida, and one of its original attractions remains closed. The Hall of Presidents was set to reopen this summer after adding President Donald Trump to the animatronic show that features all of the country's presidents. When June rolled around and rumors surfaced that Trump had no interest in recording his speech, Disney announced that the polarizing leader's recording time was already scheduled, and that the attraction would reopen later this year.

The clock's ticking. Disney World also appears likely to fall short of April's promise of porting its popular Club 33 big-ticket membership program with exclusive lounge access across all four of its Florida theme parks this year. Disney's pretty vocal about announcing new things for its theme parks, but it typically fails to address the matters when they come undone. That's fine, as it will give investors and Disney fans alike stuff to talk about heading into 2018.