Please ensure Javascript is enabled for purposes of website accessibility
Log In Help Join The Motley Fool
Free Article Join Over 1 Million Premium Members And Get More In-Depth Stock Guidance and Research
By Travis Hoium - Dec 5, 2017 at 9:35AM

After a strong year on the stock market, is Canadian Solar Inc. set up for more gains next year?

Shares of Canadian Solar Inc. (CSIQ -1.19%) have surged 48% higher in 2017 as higher-than-expected demand made its way to the solar industry and solar panel prices stabilized. The company hasn't reported eye-popping profits, but it isn't losing money either, which was a distinct possibility coming into the year.

As we near the end of 2017, it's worth considering what Canadian Solar's future looks like in 2018. It may be a year of transformation in more ways than one. Canadian Solar has plans to expand production further in 2018. You can see in the chart below that module capacity is expected to rise to 10.3 GW by the end of the year, with cell production at nearly 7.0 GW. 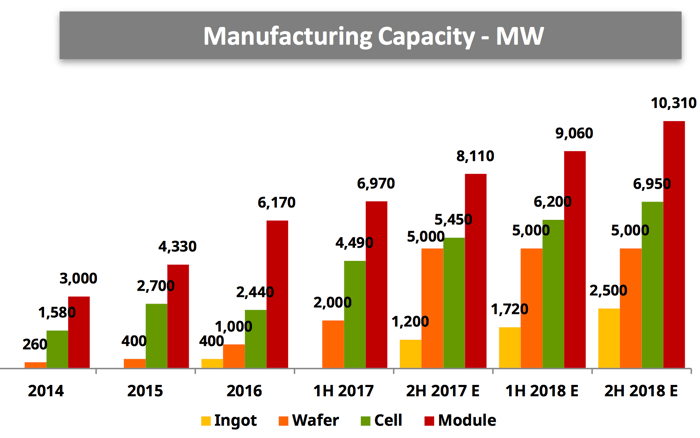 That would likely make Canadian solar the biggest solar manufacturer in the world, selling about one in every ten solar panels. The growth strategy hasn't driven profitability in the past, but the company isn't stopping now.

What could improve profitability is improving solar cell and panel efficiency. Canadian Solar is rolling out mono-PERC solar cell construction, which will mean more efficient solar panels and higher performance in harsh environments.

Mono-PERC upgrades will give those who make them a differentiation over other commodity solar manufacturers. That should boost sale price per watt, and potentially even gross margins.

Canadian Solar has said that all of its mono-silicon production will be transitioned to mono-PERC by the end of 2017, so it's moving more quickly than other manufacturers. There are no guarantees that PERC upgrades will drive improving financials, but it'll put the company in a much better competitive position in 2018.

One strange development is that Canadian Solar seems to be doubling down on its project development business at a time when other solar manufacturers are paring down self-development. At the end of the third quarter it had 1.6 GW of late-stage projects in the pipeline, and recently won a bid to build 367 MW worth of projects in Mexico. Canadian Solar is actually becoming more active in countries like Japan, the U.S., and Mexico as First Solar and SunPower roll back their development businesses.

What this does is adds another layer of risk for Canadian Solar. Now investors have to be worried about executing on projects and factors like currencies and interest rates, rather than having a focus on manufacturing. And it's not clear right now that the risk is worth it for this solar manufacturer.

There's a lot of uncertainty in solar energy right now as the U.S. considers tariffs and China begins to contemplate the policies that will drive over 50 GW of installations in 2017. But we know that solar energy is growing in both scale and cost-effectiveness compared to fossil fuels. Those trends alone don't mean Canadian Solar will beat the market, but it's a tailwind all investors should be interested in having in the cutthroat energy business.