Shares of Ascena Retail Group Inc. (OTC:ASNA) were down 21.7% as of 12:00 p.m. EST Tuesday after the women's clothing retailer announced weaker-than-expected quarterly sales.

More specifically, Ascena's fiscal first-quarter 2018 revenue declined 5.3% year over year, to $1.59 billion -- near the low end of its latest guidance, for a range of $1.58 billion to $1.62 billion -- including a consolidated same-store sales decline of 5%. On the bottom line, that translated to adjusted net income of $0.11 per diluted share, down from $0.18 per share in the same year-ago period, but roughly in line with Wall Street's expectations. 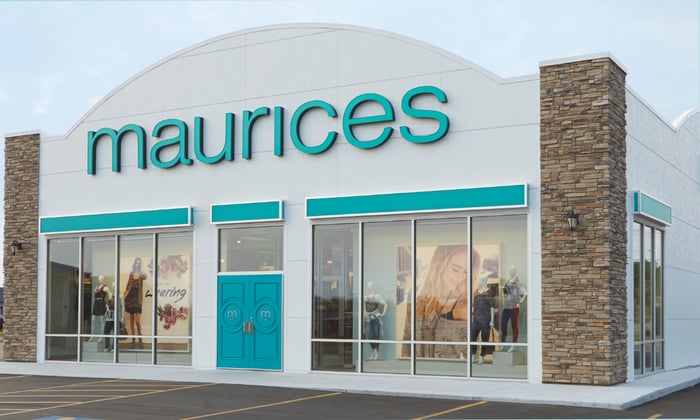 Comparable-store sales were down at each of Ascena's retail brands, declining 6% at both Ann Taylor and LOFT, 5% at maurices and Lane Bryant, 10% at dressbarn, 3% at Catherines, and 2% at Justice.

Ascena CEO David Jaffe noted that adjusted earnings were in the middle of the company's guidance range, but nonetheless "represented a disappointing quarter." "We were unable to capitalize on the improving macro traffic environment due to fashion missteps that we cannot afford in today's environment," Jaffe elaborated. "We continue to deliver double-digit transaction growth in our direct channel, but must improve our overall level of merchandising execution."

That said, the company continues to implement a business restructuring that aims to improve product execution and drive comparable sales higher, starting with the rollout of enhanced merchandise planning and marketing capabilities over the next 12 to 18 months.

In the meantime, Ascena Retail Group expects fiscal second-quarter revenue ranging from $1.62 billion to $1.66 billion, assuming a comparable-sales decline of 4% to 6%. That should result in an adjusted net loss per share of $0.12 to $0.07. Analysts, on average, were modeling higher fiscal Q2 revenue of $1.67 billion and a net loss near the narrower end of Ascena's guidance range.

Though Ascena might well be taking the necessary steps to return to sustained, profitable growth over the long term, our market hates being told to hurry up and wait. This was a disappointing quarter any way you slice it for Ascena investors, and it's no surprise to see shares down big as a result.