Please ensure Javascript is enabled for purposes of website accessibility
Log In Help Join The Motley Fool
Free Article Join Over 1 Million Premium Members And Get More In-Depth Stock Guidance and Research
By Matthew Frankel, CFP® – Dec 6, 2017 at 6:17AM

Not only is Warren Buffett's success due to being one of the greatest stock-pickers of all time, but the Oracle of Omaha also owes a big portion of his investing success to the unique business model of his company, Berkshire Hathaway (BRK.A -0.22%) (BRK.B -0.28%). While nobody has been able to perfectly replicate Buffett's strategy and results, there are some companies whose managers are using some aspects of Buffett's playbook to achieve superior results.

First of all, no business that owns about 60 subsidiary companies and a portfolio of more than $180 billion of common stocks can be thoroughly explained in a few paragraphs. Having said that, here's the simplified version. 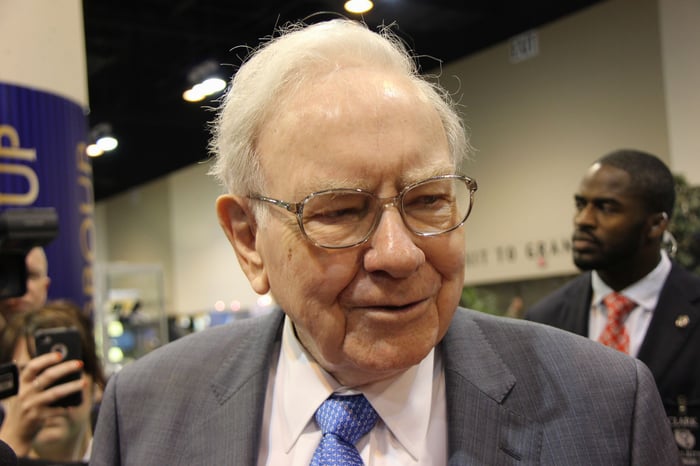 Berkshire Hathaway's core business is insurance. Shortly after taking the reins of a struggling textile company, Buffett started buying insurance companies. Why? Simply put, insurance companies make their money by collecting premiums and investing the money between the time the premiums are collected and when they're used to pay out claims. This pool of money is known as the float.

Traditionally, insurance companies invest their float in low-risk investments, such as Treasury bonds. However, Buffett used the float from Berkshire Hathaway's insurance businesses to invest in common stocks, which have significantly more return potential, and eventually in acquiring entire companies.

Today, Berkshire Hathaway is a collection of several insurance subsidiaries, including Geico and General RE, as well as dozens of other businesses, all of which generate cash that can be invested to fuel further growth.

While there are no stocks whose business models are completely identical to Berkshire's, there are a few that are using similar strategies for growth and diversification. Here are two in particular that look quite promising as long-term investments.

First, the most obvious Berkshire-like stock in the market is arguably Markel (MKL -1.52%).

The company is a specialty insurer, with insurance operations writing policies on unusual risk items that have grown into a pretty large operation. And like Berkshire, Markel uses the float from its insurance business to invest. Much of the investment portfolio is made up of bonds, as you would expect from an insurance company, but Markel also has a stock portfolio (which includes shares of Berkshire itself) and a portfolio of owned businesses called Markel Ventures.

First, Markel's insurance businesses have a strong record of profitability, so the core of the operation is solid. Aside from the third quarter of this year, which included more than half a billion dollars of hurricane-related losses, Markel has ran an underwriting profit for the past several years.

Unlike Berkshire, which needs to make multibillion-dollar acquisitions to move the needle, Markel still has lots of room for value-adding growth and can do so without having to find ways to deploy tens of billions of dollars, which has been one of Berkshire's biggest problems recently. Only about one-fifth of its revenue comes from its non-insurance businesses, so Markel is still primarily an insurance company. And with a market cap of roughly 4% of Berkshire's, Markel has the advantage that it can add serious value with relatively small acquisitions.

Not just a search engine anymore

Although Google officially changed its corporate structure into a holding company named Alphabet (GOOGL -1.40%) (GOOG -1.39%) in 2015, to be clear, the core internet search business still makes up the bulk of the company's revenue.

However, the company has certainly become more Berkshire-like as a result. For starters, the company operates as a collection of subsidiaries, including Google, Inc., and its newer and more experimental businesses such as Nest Labs and Waymo, just to name a couple. Since the restructuring, Alphabet has even made common stock investments, such as a stake in Care.com (NYSE: CRCM), which its Google Capital division acquired in 2016.

Alphabet itself is a rather small operation, taking up just half a floor in an office building, similar to Berkshire's modest headquarters in Omaha, Neb. In fact, Alphabet's executive chairman, Eric Schmidt, confirmed that the restructuring was inspired by a long-ago visit with Buffett.

Another Berkshire-like characteristic is how Alphabet gives its subsidiary CEOs complete autonomy, just as Buffett does with the management teams of Berkshire's subsidiaries. "We're trying to push the Alphabet companies to be separate companies, not divisions," Schmidt said.

There's no way to know whether Alphabet will become as much of an investment-focused company as Berkshire, but the structure has certainly become much similar over the past few years.

Will there ever be another Berkshire Hathaway?

As of 2017, there isn't another company on the market that has come close to replicating Berkshire's success with its conglomerate-style business model, but these two companies are certainly on the right track and could certainly generate market-beating investment returns if they are able to successfully implement the Oracle of Omaha's investment strategies.