Please ensure Javascript is enabled for purposes of website accessibility
Log In Help Join The Motley Fool
Free Article Join Over 1 Million Premium Members And Get More In-Depth Stock Guidance and Research
By Jamal Carnette, CFA - Dec 6, 2017 at 7:33AM

Although new CEO Satya Nadella has put Microsoft's lost decade to rest, there are three concerns investors should be aware of.

It's a new era for Microsoft (MSFT 1.07%). Under prior CEO Steve Ballmer, the company experienced a lost decade for failing to adjust to the shift to mobile and falling behind various competitors -- notably Apple in smartphones and tablets, Alphabet in search advertising and browser share, and both in mobile operating systems. The company always maintained its dominant share with its Windows desktop operating systems and in its Microsoft Office suite of productivity tools.

New CEO Satya Nadella has led the stock to a renaissance on a two-pronged plan of action. First, the company is working to convert users of its operating system and software to subscription-based billing. The second was to increase its presence in the high-growth cloud-computing industry with its Microsoft Azure program.

Nadella has been mostly successful, and shareholders have been handsomely rewarded under his leadership. But could anything go wrong? Here are three business-specific risks management noted in its last quarterly statement. 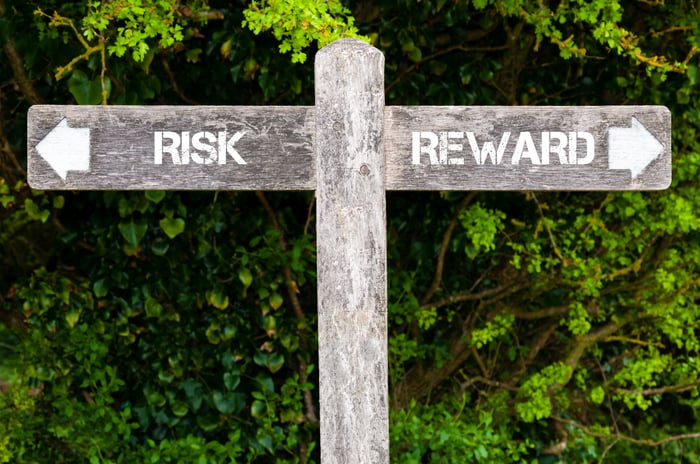 The continued shift from desktop to mobile

While this risk is nothing new -- in fact, it's largely why Ballmer is no longer the CEO -- the transition from desktop to mobile is a risk to Microsoft. In 2016, we crossed the Rubicon in terms of mobile versus desktop -- StatCounter found that users accessing the Internet from mobile devices exceeded personal computers for the first time ever.

Nadella's solution is twofold: partner with large smartphone OS companies Apple and Alphabet to include a subscription-based app for Office-based software. In larger form-factor tablets, Nadella continued (and improved) Ballmer's vision to vertically integrate its Surface line of tablets. Still, management wants you to know that a shifting browsing landscape from desktop to mobile continues to present risk.

Other competitors develop and offer free applications, online services and content, and make money by selling third-party advertising. Advertising revenue funds development of products and services these competitors provide to users at no or little cost, competing directly with our revenue-generating products. [emphasis added]

Microsoft faces further threats to the company's Microsoft Office suite of products from competitors that mirror the functionality as part of a custom solution for enterprise-focused clients. A recent article from The Wall Street Journal found chief financial officers are increasingly replacing Excel with enterprise resource planning (ERP) and customer relationship management (CRM) systems from providers like Salesforce, Oracle, and SAP.

Issues with its own revenue model

Nadella has done an admirable job converting Microsoft users to Office 365, its subscription-based product. However, most of Microsoft users are still on a licensed-based version. License-based revenue is more uneven, as it requires a compelling new version to induce the consumer to upgrade. Additionally, having multiple versions of operating software requires higher levels of staffing for upgrades, patches, and other software fixes.

An investment in Microsoft has its share of risk, as with all stocks. However, Nadella is working to mitigate these key risks while keeping a focus on growth opportunities in the cloud. In Microsoft's recently reported first quarter, it reported cloud-based Azure revenue growth of 90% year on year. Look for Microsoft to continue to build upon recent successes, and for its stock to continue its strong run.